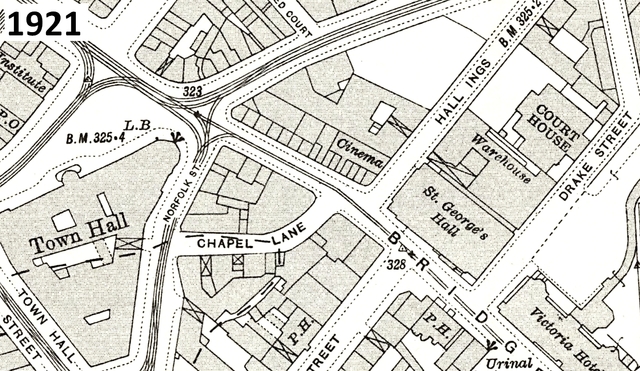 The British Galleries in Bradford occupied a rectangular site directly across Hall Ings from St George’s Hall and it was parallel to (but set back from) Bridge Street. Apart from the Hall Ings side, it was surrounded by other buildings. The site is now part of Britannia House, opened 1933. Entrance to the Galleries was through a property between between shops on Bridge Street. In early-1908 it was hosting art exhibitions, but in August 1908 auctioneers W.G. Stansfield were clearing stock at their Bradford Salerooms Forster Square in order to move into the British Galleries. They had a short occupancy, as the Electric Theatre de Luxe opened in the building on 14th January 1911.

The excellent research into this cinema by the late Colin Sutton can be accessed at https://www.bradfordtimeline.co.uk/deluxe.htm#dance