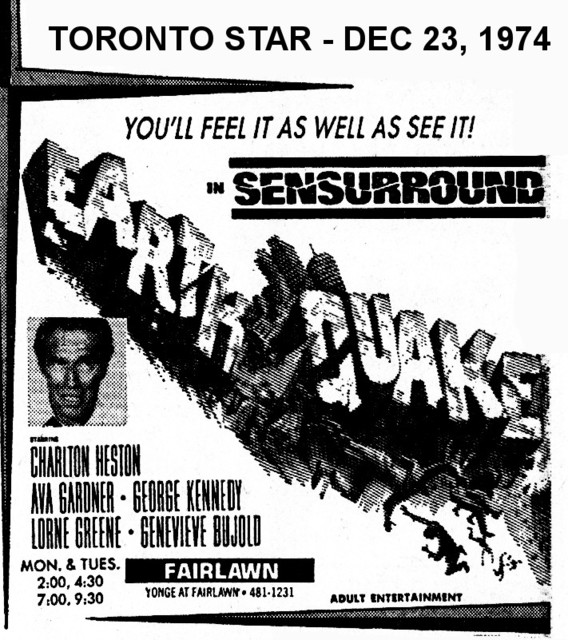 The Odeon Fairlawn was the first Odeon theatre in Toronto to be built by the British cinema chain J. Arthur Rank Organisation through their subsidiary Odeon Theatres Canada. It was opened April 16, 1948 with Trevor Howard in “Green for Danger”. It was a lovely neighbourhood theatre in North Toronto and for many years showed films along with the other Odeons in the city. During the 1960’s it was Odeon’s main roadshow/reserved seat house where it had many long runs including “Lawrence of Arabia” (moved up from the Odeon Carlton), “Lord Jim”, “Those Magnificent Men in Their Flying Machines” (50 weeks), “Funny Girl” (68 weeks), “The Blue Max” etc.

During the 1970’s it was the exclusive theatre in Toronto for Sensurround (remember that?) where it showed “Earthquake”, “Midway” and “Rollercoaster”. About 1977 it was twinned like the Odeon Hyland and Odeon Humber before it and continued showing major new releases in both dowstairs and upstairs theatres.

The Odeon Fairlawn had a nice long lobby running along the front of the theatre with a large picture window looking out on to Yonge Street. At the far end of the lobby was a small art gallery/lounge which added to the charm of theatre. The Odeon Fairlawn was abruptly closed in late-1985 and was demolished for a non descript office building. A loss for movie goers and North Toronto residences alike.

A picture of the Fairlawn can be found here:

Many Odeon Cinemas throughout Toronto, the suburbs and southern Ontario had Sensurround installed, it was not exclusive to the Fairlawn however there were non-Sensurround cinemas too.

I think the cinema was twinned about 1976. I remember seeing Earthquake there and I know it was a single then but when I saw Midway I’m sure it had been cut up. They played Midway in both cinemas and started both Sensurround prints at exactly the same time so that the sound bleeding from one cinema to another wouldn’t be noticed as they were practically in sync with each other, give or take a second or two.

Here’s an updated link to the picture I posted above:
View link

I worked for Odeon during this period and was transferred as assistant manager to the Fairlawn in 1969, during the reserved-seat presentation of FUNNY GIRL. We played all 3 Sensurround features there: EARTHQUAKE (1974); MIDWAY (1976)—the final film to play in the 1,064 seat single auditorium — and ROLLERCOASTER in both theatres in 1977. The Fairlawn re-opened as a twin with THE SLIPPER AND THE ROSE downstairs and THE TOWN THAT DREADED SUNDOWN upstairs. As noted above, the lobby had a nice relaxed atmosphere with the little art-gallery — a far-cry from today’s “ make-a-$-in-every-inch ” noisy carnival environs…