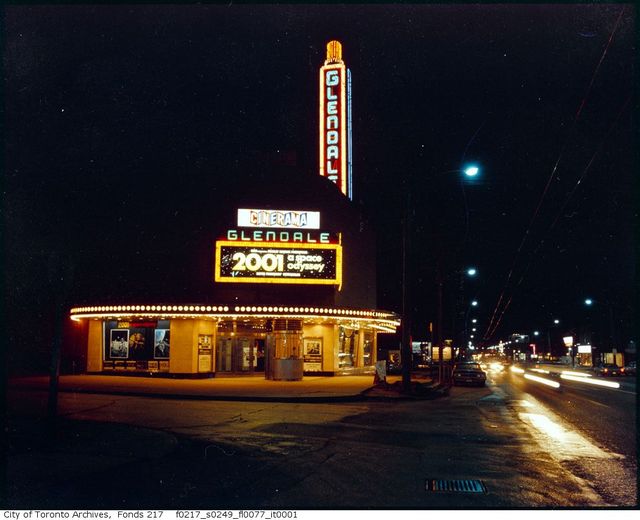 The Glendale Theatre was opened in December 1947.

The first dealership on that site after demolishing that lovely theatre was called Glendale Ford. As far as I know, the Glendale still did good business back then so why Famous Players wanted to sell to a car dearler is beyond me. The nearby Odeon Fairlawn lasted to 1985 so I’m sure the Glendale could have lasted at least until the end of the 70s if not longer.

Does anyone remember how long the movie Grand Prix. played at the Glendale. As a teenager I must have seen that movie 5 times. It’s still one my favorites.

The Glendale Theatre opened on December 1, 1947, according to this page at Silent Toronto. The opening day ad credits the companies involved in the design and construction of the theater, including architects Kaplan & Sprachman.

Mandel Sprachman also designed a house in the area which Boxoffice of October 25, 1965, mentioned only in passing as the Don Mills Theatre. It was leased to Odeon and opened about 1963. I don’t think it’s listed here yet. Another Sprachman design apparently not yet listed was the Odeon Albion, which I believe was also in the northern part of Toronto.

The Don Mills cinema was in the Don Mills Centre (built 1955) just east of Don Mills Rd., south of Lawrence Ave. It was a big 700 or 800 seat cinema built in the mid 1960’s. They built a second smaller cinema (perhaps 500 seats) in the early to mid-70’s. The complex closed around 1984-1985 when the new Fairview cinema complex was built and the cinema complex (which was separate from the mall) was demolished shortly afterward for more parking. The Don Mills Centre was enclosed in 1978 but eventually fell into disrepair and was mostly demolished in 2006. The whole area has since been re-developed.

The film 2001 A Space Odyssey had a more than 4-year run at the Glendale. One evening, the film started coming out of the projection booth and into the last row of the audience! Perhaps a projectionist could explain how that occurs, particularly with the take-up reel. Shouldn’t there have been a warning that the film isn’t being taken up in the proper manner?

Here’s an article from a few days ago published in the Toronto Star that some may find of interest. The Glendale and other Toronto cinemas are mentioned (and some might recognize a Cinema Treasures contributor quoted in the piece).

We Torontonians like to think of ourselves as visionary sophisticates, the kind of people who would prefer to boldly reach for the stars, rather than doggedly climb every mountain.

Our choice of favourite movies suggests otherwise. I thought I was on safe ground last week when I declared 2001: A Space Odyssey to be T.O.’s all-time most popular cinematic experience, going by what two sources (and personal memory) indicated was a four-year run at the old Glendale theatre on Avenue Rd. I believed that to be the longest a movie has ever played in one theatre in the city for a continuous run.

Tim Elliott, a Toronto movie buff and collector, contacted me with a contrary assertion: The Sound of Music edged 2001for popularity honours. The Sound of Music, a musical in which Julie Andrews and Christopher Plummer climb every mountain that love, geography and the Nazis hurl at them, played for 144 weeks at the Eglinton Theatre, which still stands but no longer operates as a movie house. The film made toes tap and tugged at heartstrings at the Eglinton from March 10, 1965 to Dec. 21, 1967.

A few months after The Sound of Music closed, 2001: A Space Odyssey opened at the Glendale theatre on Avenue Rd. The outer space adventure billed as “the ultimate trip” seared eyeballs and dazzled brains there for a total of 127 weeks, roughly 2.5 years, from May 30, 1968 to Nov. 3, 1970 — and it screened in the widescreen marvel known as Cinerama, no less. The Glendale no longer exists, sadly, having been demolished in the 1970s and replaced by a car dealership.

“These were both the longest single engagements in the city, as far as I know,” Elliott, 62, told me via email.

He bases this on his study of movie ads in the Toronto Star and other newspapers, “a hobby of mine since seeing my first grown-up film Breakfast at Tiffany’s in 1961 as a kid and falling in love with Audrey Hepburn and the movies and movie theatres.

“In my basement I have file drawers filled with the movie ads from all of the Toronto newspapers from the ’60s on. I also used to keep lists of most of the theatres of Toronto and write down each movie that played in each one and how long they played. Unfortunately, I misplaced those lists during a move and haven’t seen them in years.”

But he managed to keep a lot of stats on movie engagements, including these other long runs in Toronto:

There have also been long engagements of close to a year or more for the original Star Wars, Oliver!, Those Magnificent Men In Their Flying Machines, The Gods Must Be Crazy and La Cage Aux Folles, among others. Note that these achievements were all notched mainly during the 1960s and ’70s, before the widespread adoption of colour TV, multiplex theatres and home video. Then came the Internet and VOD (video on demand), which changed things further still. Most of these records also precede the blockbuster era, where it became commonplace to open a movie at many theatres at once, rather than have it take up residence in a single prestigious theatre for a “road show” run. It’s almost impossible now to think of movies having a lengthy run in a single Toronto theatre, although there are exceptions. Avatar ran in the Scotiabank theatre for nearly six months, from Dec. 18, 2009 to May 27, 2010, and it remained in the Toronto market at least until June of that year, says Cineplex spokesman Mike Langdon. He adds there’s nothing to stop a film from setting a record. “For us, we will leave a film on screen as long as there is demand from the guests to see it. Our guests determine how long a run actually is.” I recall that Titanic also had a very lengthy run in Toronto, perhaps as long as Avatar, both films having been directed by Ontario-born James Cameron. Cineplex doesn’t have ready access to screening stats, and neither does Paramount, the studio that released Titanic. But the intrepid Astrid Lange in the Star’s library found that it played at the Uptown theatre from Dec. 19, 1997 to June 30, 1998. It moved from the Uptown to the Uptown Backstage on July 1 for another few weeks. Sad to think that most of the single-screen theatres where records were set are now demolished or otherwise unavailable: Uptown, University, Odeon Fairlawn, Nortown, Hollywood, Eglinton. All gone. It comes as no surprise that all of these movies are mainstream crowd-pleasers, although 2001: A Space Odyssey also qualifies as an art house head-scratcher. But three of Toronto’s all-time favourites are space movies: 2001, Avatar and Stars Wars. So maybe we’re visionaries after all.

It was 50 yeas ago today that Stanley Kubrick’s “2001: A Space Odyssey” opened here in what went on to be the film’s (and venue’s) long-run record with a 127-week engagement.

This is another one of those locations where Google Maps traps street view inside a building. I think they must be getting paid to do this by the owners of the businesses on display. (I know Google desperately needs the extra money (/sarcasm) but it’s still irritating.) I’ve pinned the view in the parking lot outside the building, at least. If you go back indoors you can see the insides of a couple of cars you’ll never buy, but Avenue Nissan might have to pay Google to have you look at them.

Here is a convenient link to a regular street view. I’d have linked to Bing Maps instead, but they don’t have a street view for this location.