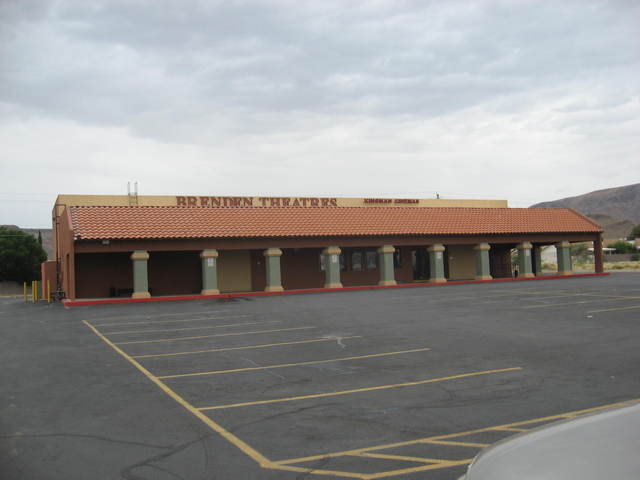 The Movies is a fourplex opened on December 10, 1982. The Movies is pretty much a plain, homogenized modern theatre without any notable architectural highlights or even an interesting marquee. There’s nothing very special about The Movies other than it is the ONLY theatre serving Kingman (Since the State Theatre closed down in 1979) and the prices: $2 before 6pm and $4.50 adults after six. And the movies are all current and first run.

The Movies is just north of the freeway on Stockton Hill Road.

The Movies was closed by Cinemark in late-December 2007, but was reopened under new management on December 19, 2008.

i do have some photo’s of this site. i do also have inside pics. Cinimark has gutted the site. i am looking to bring this site back to a 4 plex. i am in need of investors for long term arangements. i have a $400,000 budget. for this will get us to opening day.

There is a news article in the Kingman Daily that says The Movies will reopen December 12.

You can read more about its opening here.

The new owners have opened the theater for a local benefit screening of movies Kingman locals could not see on the big screen this past year like “WALL-E” and “The Dark Knight”. The theater reopens for regular showings on Dec. 19th.
View link

I Chris Hammontre has no part in this location. for i am still looking for anyone that wants to enjoy a quality show for a great price.

Email me for more info

Brenden Theatres now operates this theatre according to the above article.

Letter: It’s up to us to keep theater clean

I’ve been to Brenden Theaters Kingman Cinemas a couple of times since it opened.

Like most of us Kingmanites, I’m thankful we have a theater again.

The staff is friendly, seats are comfortable, sound and images on the screen are awesome and the popcorn is delicious.

So you can imagine how disappointed and annoyed I was when I saw chewing gum on the arm of my seat, kids throwing trash on the floor and people with their feet up on the seats.

It’s up to all of us to keep our new theater nice.

Parents, teach your kids some manners.

Kids, don’t let your friends destroy the theater by trashing it.

It is up to all of us to make sure we keep our new theater nice for the next person.

We all need to work together.

As a younger minded comunity member here(37),if i had even done anything like what kids or adults have done. i would not be able to sit for a week. if i was bad i was punished for it, if i was good i was rewarded.

its us older generation that had desided that the good old fashion spanking ,is wrong, and a time out is in order. what does that show kids this day and age.

Theater is a public place like all places in the USA

Feel free to do bussiness with us, but you trash my house then your goin to pay for it.

kudo’s brendon theaters and Tom D. for taking the Kingman Challange. its oing to be a long road for you and your cast.

last i have been told Cinimark is returning with 1st run film.

i am sorry to say i will not be a resident that will go to your movies though. for if i am going to pay 7.50 for a movie i would rather head over the hill and pay 9.00 and have dinner also.

Kingman is liveing in the ice age to me. and home,utility,and general cost to live hurts the bottom line.

Cindy: Yes, I am game, it’s a great idea, I’ll present it to Brenden Corp, and see if we can get it on during each pre show. Thank you,

Jay Link – How about having “a pro bono” commerical at the beginning of the movie, “Remember when the movie is done, take your drinks and snacks to the trash.” Your doing such a commerical should be part of your “contract” with every theatre!

Sad to say, for those who don’t educate their kids, someone else needs to step up to the plate and do so.

Oh Brother, you are wrong because I remember as a kid the theaters had ushers that told you to keep your feet off the backs of others and tried to keep things in line. I get so sick of adults saying kids will be kids because kids need to be taught what’s right and wrong, to respect other peoples property and so on. I blame the older generation for being to lazy and afraid to make the kids mind. We have been to the theater once and it was really nice and completly redone. I dont think Kingman needs a new theater at this time and we should take care of the one we have!!

The theater is very nice now. Not at all like the old theater it used to be. So I agree, that it is up to us to help keep it nice. It isn’t that hard to throw your trash away when you’re done.

There should be a theater just for kids and one for grown-ups. Especially one for teenagers, they happen to be the worst. Their hormones are flying and they are with their signifcant other and start showing off with their cell phone, iPOD or talking…ugh! Little kids kick the back of my seat during the movie and that irritates the heck out of me. And the dang parent is sitting right there watching their kid do it. I have two kids of my own but I taught them to behave in theaters. Maybe we can offer a “how-to” course on how to act in a theater, call it “How to Act in a Theater 101”.

My Company does the local on screen ads for the Kingman -Brenden Theater, and I have to say that Owner Tom Daugherty and staff are doing a fine job with the remodeled theater. A few bad eggs just seem to want to ruin it for everyone else’s movie going experience. If you visit the theater and see this type of behavior by the younger adults and teens, please report it to the staff immediately. It’s a great theater and we should all be grateful Brenden Corp & Tom put it all back together

That place was always a dump. Did they remodel it or just use the same stuff from before? It was always ran by kids too so I agree completely with the other person about that. I’m just looking forward to the shiny new theatre on eastern and hualapai Mtn rd.

What happened to Common courtesy/politeness/manners/respect/common sense/parents ?Oh,yea,that was the 1950s.Sure not in this century.Parents (some) do not have respect for themselves so how will they teach their kids the same values.

tomet- I agree. I have seen so much nonsense in this city and I blame the people who have no respect for their neighborhood,home,community and all this brings down the property value and outside tourist which judge what type of people live in Kingman. The people here need to take pride in their homes,yards,city itself. Sometimes I call Kingman Pig City!

Vicki is right. We get a theater back in Kingman and kids and adults both continue to opt not to take care of it. I have been to the theater and there are adults that work there now and they do seem to care. Unfortuately there is little community pride and this is just one small sample. The bottom line is SHOW SOME PRIDE IN YOUR COMMUNITY AND QUIT MAKING EXCUSES!!!

The real problem is that the people running the theater allow this to happen. I have yet to go to the re-modeled theater but the old theater was ran by kids. If the “Manager” was more than 17 I would be shocked. The kids running the theater are more concerned with playing around than they are in keeping their job. All it would take is throwing out 3-4 of these hoodlums that are destroying the theater and the punks would not act like that but what 16 year old kid is going to kick his friend out of the theater?

It would also help if parents actually went to the theater with their kids instead of using the theater like a cheep babysitter.

Just another thought for parents – don’t send your children to the theatre if you know they have headlice.

When the Pirates of the Carribean was showing, the Movies were offering a two for one special(our family joke). Anyone that has had to contend with this issue after going to see this movie, knows that lice treatments were flying off the shelves and you had to go to several stores to find it.

Oh brother! This has been going on since theaters were first opened! I wish these was the worst things kids in this town did.

Article comments are not posted immediately. Each submission must adhere to the Use of Service section in our Terms of Use agreement. There may be a delay for comments to appear. Your comments may also appear in our print edition.
The email address you provide on this form is for internal use only and will not be visible to the public.

The December, 1982, issue of Boxoffice said that a four-plex to be called The Movies was soon to open in Kingman. A four-plex built at Kingman for ECA (the parent company of The Movies) is included on this list of theaters designed by architect Thomas Berkes.

I actually left the other day because of some screaming whiny brat kids. I am sorry but kids shouldn’t be allowed in the theaters. I work and dam it if I go see a movie I want to enjoy it not hear a whiny kid.