Kinema in the Woods

Kinema in the Woods (Official)

Previous Names: Pavilion Kinema, Kinema in the Woods & Kinema Too 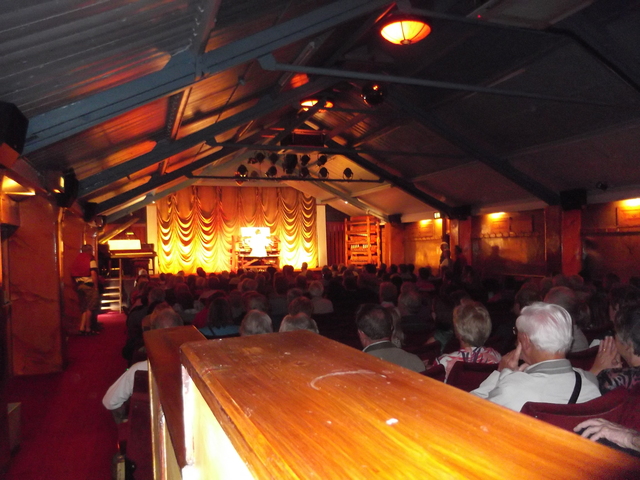 Opened in 1922, the Kinema at Woodhall Spa – unique among the cinemas of Britain – showed its first film, silent of course. It had started life as a concert pavilion looking out over Tennis Courts, Croquet lawn, Gardens and bandstand in the Spa grounds between Victoria Hotel, then in its Edwardian heyday, and the newly built, Petwood House.

Captain (later Major) C. C. Allport converted the concert pavilion into the Pavilion Cinema. The moving picture was the new entertainment of the age, and Woodhall – where people came for rest and recreation – was not to be left behind.

The conversion was achieved very simply – by building onto the north end of the pavilion a corrugated iron shed and projecting onto the transparent screen from the back (aka rear projection). The rock-steady picture was described by a film producer in the 1920’s as the finest projection he had yet seen in Britain, Canada or America. Moreover, Woodhall’s cinema was then only the 68th cinema to be opened in the whole country. The rear projection system – which is what makes the Kinema unique – is still used today, the only example of rear projection now operating in the UK.

Most of the hall was fitted with tip-up seats, but a special and much appreciated feature was that the front six rows were deck chairs. They were much sought after by patrons at 1s 6d (other seats ranged from 1s 3d to 6d). As a throwback to the heyday of the Spa, the deck chairs survived to 1953. Music to accompany the silent films was provided by the Phantom Orchestra. The cinema, or Pavilion Kinema as it became known (and then a little later, Kinema in the Woods because of its setting among the pines) was one of the few provincial picture houses patronised by Royalty on several occasions every year.

In the mid-1970’s the seating capacity was given as 365. A Compton Kinestra 3Manual/9Rank organ was installed in 1987, and the console (which is the only surviving Japanese Laquered console in the UK) was originally installed in the Super Cinema, Charing Cross Road, London in 1927 until 1943.

For half a century it could be said that Major Allport was the Kinema. When he applied for his 50th license in 1972 it was granted free of charge. Today the Kinema in the Woods is part of a small group including the cinemas at Spilsby and Mablethorpe owned and run by James Green. Seating is provided for 280 in the main original auditorium. In 1994 a second 92-seat auditorium was opened adjacent to the original and this new auditorium has its side-walls decorated with scenes of the Lincolnshire countryside, painted by Canadian artist Murray Hubick.

The Kinema always ‘has a comfortable seat for you’. It is open Seven nights a week-and long may it continue.

In February 2010 it was equipped with digital projection (the 35mm projectors have been retained) and this could now be the only digital rear projection cinema in the world?

In late-June 2019 a 74-seat third screen was opened alongside the main building.

Two recent (December 2009) photos of the Kinema can be found here:–

This cinema looks absolutely charming and my hopes are that it will continue to be supported by locals and visitors alike/
I must pay a visit when next back in “dear old Blighty.”

Google Map it (Woodhall Spa) and see its setting in the woods, itâ€™s the far building on the apex of Coronation Road in the wood (you can see the car parking spaces that go around the cinemas left side). It really IS just simply breathtakingâ€¦

Englandâ€™s only back projection cinema, Kinema in the Woods, is now up and running in Googleâ€™s â€œStreet Viewâ€ (March 2010). The best way to appreciate the view into the woods to see this charming, rustic cinema is to travel along The Broadway (Woodhallâ€™s main road) and turn into Spa Road then left by following King George Avenue to the bottom, then turn right into Coronation Road (follow the signposts directions for KINEMA). You should then see the old, disused Spa building (blacked boarded-up windows) and the Kinema is to the left of your picture (use the left â€œarrow key on your PC keyboard): Youâ€™ve experienced the PC effect, now all there is to do is to do the drive, or better, the walk through the woods to this cinema: Enjoy.

A very nice video describing the history of the Kinema is available from the website. It’s fascinating stuff, and well worth a view.

I have the new DVD and it’s very well put together and a fine historical document. The DVD Extras are, too, enlightening…check it out :)

Still going strong in 2018, and indeed about to expand with the addition of a third screen on the right hand side of the building.

A new car park is nearing completion at the side of the Kinema, and groundworks have begun for the third screen. Images of Kinema Too from July 2018:–

Kinema 3 opened last weekend of June 2019 on the righthandside of the original building.