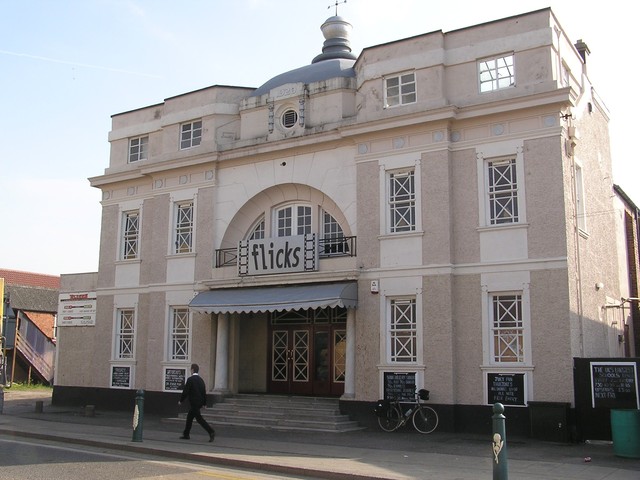 The Picturedrome opened in November 1920 with 900 seats. It was a lavish building in the small Lincolnshire town and incorporated artistic painted scenes in side panels on the walls beneath a barrel vaulted ceiling decorated with richly moulded strapwork. There was a deep rectangular proscenium arch and a small stage, sometimes used for drama and variety performances. It also had a café for the convenience of its patrons.

It was equipped for sound in 1931, and the cinema was so successful that in 1934 the balcony was extended to accommodate an additional 80 patrons. It was taken over by the Leeds based Star Cinemas chain in 1939, who installed a new CinemaScope screen in 1955 on a 29 foot concave screen. It was taken over by an independent in 1968 at the end of Star’s lease and a second cinema was added in the former café in 1980 seating 60.

The downturn in cinema-going affected the Sleaford Cinema as it was now known and on 30th October 1984 the main screen closed after problems with the heating. It was stated that it simply was not viable to repair and in 1985, after the screen and fittings had been sold to another cinema, it became a snooker hall. This necessitated the demolition of the stage, the levelling of the sloped stalls floor, and a false floor erected at front of balcony level.

The small screen in the café continued for many years after this, but closed on 9th September 2000 and the Picturedrome began use as a nightclub called Flicks, by 2015 re-named Reel nightclub. It had closed by early-2020 and the building is vacant. In August 2020 it was being refurbished to reopen as Heat nightclub.

A exterior pic of the Picturedrome as it is in 2007 can be found here:–

and a picture of the foyer is here:–

The Picturedrome opened on 8th November 1920 with Vincent Serrano in “Eye for an Eye”(A Modern Monte Cristo).

Still in nightclub use as of Nov 2015 as Reel nightclub

By June 2020 it was being refurbished as “Heat”