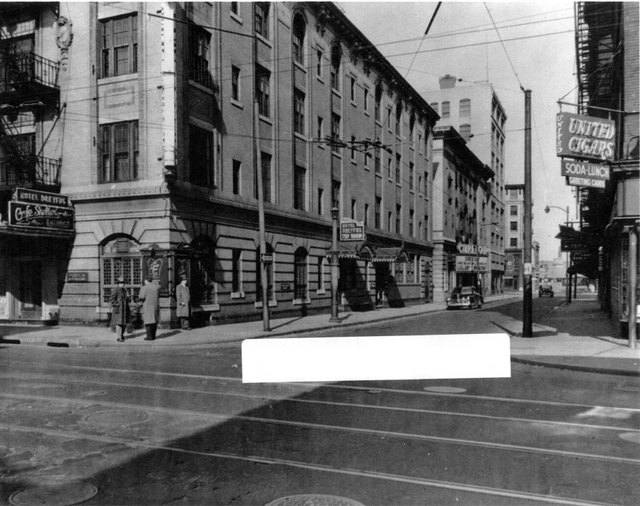 A medium sized theatre in downtown Providence, the 1,786-seat Emery Theatre was opened October 26, 1914. It opened with Marcus Loew’s vaudeville plus movies. The proscenium was 38ft wide and the stage 32ft deep. In December 1914 Mae West appeared here.

In 1927 it was renamed Carlton Theatre. It was used through much of its existence as a second-run or move-over theatre. The Carlton Theatre was closed in March 1954 and was demolished later in 1954. A parking lot is on the site today.

“The Miracle of Our Lady of Fatima” packed them in at the Majestic. It was scheduled to move to the Carlton for an undetermined period."

A view of the Carlton Theatre marquee and Mathewson Street can be seen in this photo which probably dates to the late 1940s or early 1950s.
View link

The Emery Theatre closed for the sumer of 1927 for refurbishing, was renamed the Carlton Theatre, and opened under that name on Labor Day, September 5, 1927 with a film program of The Gingham Girl (“Broadway’s greatest musical show brought to the screen”), starring Geo. K. Arthur and Lois Wilson. But this was a silent film. Sound would not fully arrive for another couple of years. Also on the program was an Our Gang comedy called “The Glorious Fourth”, the news, and five live Vaudeville acts. The theatre’s grand organ and orchestra are mentioned in the ad. Programs ran from noon to 10:30 P.M., Sundays from 2:30.

In an unusual bit of programming in February 1921, Charlie Chaplin’s The Kid was booked simultaneously in five downtown Providence theatres: the Strand, the Emery, the Modern, Fays, and the Rialto. Occasionally some highly anticipated movies might play in two downtown theatres, but never five! It seems to have run only one week, in an era when that was pretty much the norm, with films running a single week downtown, then moving to second run theatres and outlying houses. Each of these theatres accompanied this feature with short subjects or live Vaudeville acts.

Mr. DeLuca, I noticed that the picture of the Carlton is contributed by you. Is this a cropped photo? I am interested in seeing a photo of the Carlton where you can see the alleyway that separated it (on the right side if you were facing the front) from the Palmer Block building. Or perhaps if you had any other photos which may show this. Thank you, Julie

JulieAnnMazza, No, that was taken from a newspaper clipping and is all there was. The Providence Journal archives may contain a wider photo. My link of June 16, 2005 (q.v.) shows more. It is a postcard image of when the theatre was the Emery. Photos of the Carlton are impossibly rare.

Here’s something from the “Rhode Island Jotting” column of Motion Picture News for November 4, 1922:

“The Emery theatre, which shows feature and comedy pictures in connection with its vaudeville, celebrated its eighth birthday during the week of October 23.”

The March 27, 1954 issue of Boxoffice Magazine has a long article entitled “Death of Carlton Mourned like Old Friend.” Google “Boxoffice-March.27.1954” and the issue should come up.