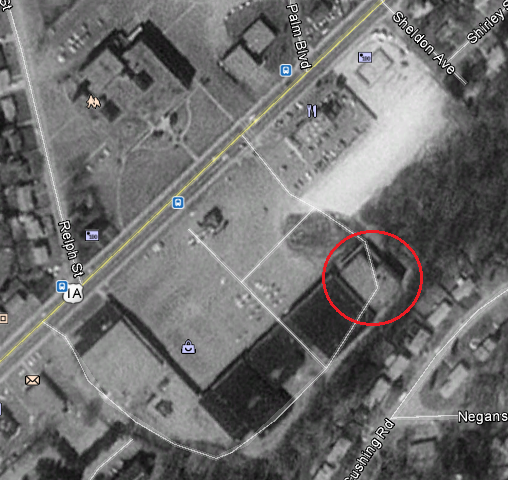 Opened on March 19, 1964, this was a plush first run single-screen theatre and the only movie theatre in Warwick at the time it opened. In 1965 it achieved a major coup (beating Providence’s Elmwood Theatre) when it became the Rhode Island theatre to show “The Sound of Music” in an exclusive 70mm run. It played here for over a year on a reserved-seat roadshow basis. Bus loads of people came here from everywhere, school children, senior citizens, the whole citizenry of Little Rhody.

After that, the theatre went into slow decline, with some occasional high spots. Competition from the newer Warwick Mall Cinemas (now gone also) and other multiplexes affected the theatre. The Warwick Cinema eventually shut down and the building was razed in the 1980’s or thereabouts. A shopping center is there now.

By the way if the webmaster or anyone else is interested there was another independent theater in warwick. The meadowbrook cinema on warwick avenue in the southern end of warwick , it was best known for midnight rocky horror show showings!I was not really into that but it was there for maybe as many years as the warwick cinema.

ngtowl, The Meadowbrook is listed HERE on Cinema Treasures.

I too grew up in Warwick, about a mile south of this theater. I went to Aldrich Junior High across the street and went to many movies here. In particular I remember the summer of ‘77 because it was between jr. high and high school for me, and also because Star Wars played at the Warwick Cinema. I was too young to have a job, but I had a paper route and an allowance, so a friend and I went to see it five or six times over the course of the summer months.

It is nice to see people who grew up in my neck of the woods..just a great part of R.I.
owl

I remember Bill Quarters when I was managing theatres in RI. That name was a blast from the past. Most all the theatre people knew each other because we shared union projectionists from the same local.

Too many names to remember from both the management and union side of this business!

Article in Boxoffice magazine, April 20, 1964, reporting on the opening of the Warwick Cinema of Post Road on March 19, 1964:
View link

What year did this close? I know it was open until the late 80s. I remember going to many rare movies like midnight shows of the Three Stooges

From what I can remember, the Warwick Cinema closed sometime between 1984 and 1989. It was most definitely closed and boarded up in 1990. Sometime in the early 90’s, my boy scout troop held a car wash at the McDonald’s in the plaza. A few of us wandered off to explore the building via the decomposing rear exit from the theater. The place, though ransacked, looked as though it had been closed for the night. Cups, popcorn buckets, straws and other trash littered the place. There were still items strewn around from the smashed glass candy case, and the sample popcorn buckets with prices on them were still lined up along the back of the counter. I took the large bucket with it’s little red plastic price numbers glued on, a few blank employee name tags, and a strip of connected tickets to a 1980’s showing of “Luther” (the 1973 version). We weren’t brave enough to venture upstairs to the storage, office or projection space. At one point the building was mostly gutted and a locked entry door installed through the boards over the front entrance. I can remember finding strips of degraded film on the ground outside in the years after it was gutted. I even remember watching as the building was being torn down. As the front of the building was peeled away, marquee letters organized in a rack on the upper level spilled out into the rubble. I saved a couple of random letters, though I never did anything with them. I’m pretty sure I lost all the taken objects when I moved out of my parent’s place. It’s amazing that the building existed until just under 20 years ago, and yet as vividly as I remember it, there are no pictures of the building to be found anywhere.

It was 50 years ago today that “The Sound of Music” premiered at the Warwick Cinema. With a reserved-seat run of 86 weeks, it’s almost certainly the long-run record holder for this venue. (Anyone know of something that ran longer?)