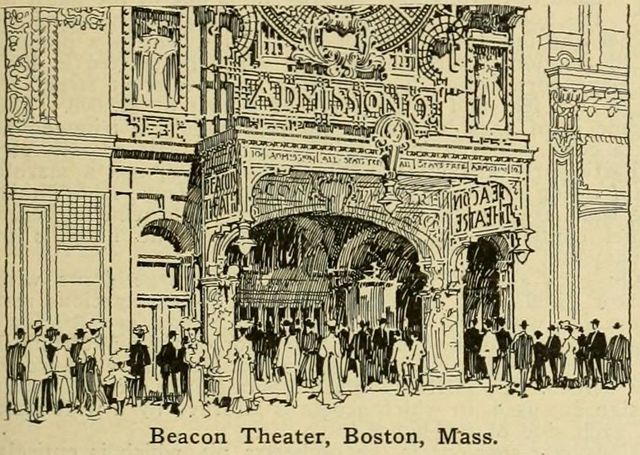 The original Beacon Theatre was opened February 17, 1910 by movie theatre pioneer Jacob Lourie and to the designs of architect Clarence H. Blackhall. The building at 47-53 Tremont Street was built in 1874 as a bank. In 1948, the architectural firm William Riseman Associates remodeled the theatre and it was renamed Beacon Hill Theatre from November 10, 1948.

Ben Sack allegedly won this theatre in a poker game, and it became the beginning of what eventually became the regionally dominant Sack Theatres chain.

From at least World War II through the 1960’s, the Beacon/Beacon Hill Theatre was one of Boston’s premiere art houses. In 1969, it was torn down and replaced with the One Beacon Street tower, which contained a new single-screen Beacon Hill Theatre in its basement.

The second Beacon Hill Theatre, which opened in 1971, featured primarily first-run Hollywood films. It was triplexed in the early-1980’s and briefly became an art house again, until Sack opened the Copley Place multiplex.

During its last few years, the Beacon Hill Theatre showed mostly B-grade action and exploitation films, mixed in with an occasional move-over from one of Sack’s better-quality downtown houses.

In 1992, it became the first of many former Sack Theatres that Loews would close over the following decade.

I understand that the (Keith) Cinerama theater on Washington St. had shown ‘2001: A Space Odyssey’ upon initial ‘road-show’ release. But was that the ONLY theater in Boston to do so? Was it ever shown at that time, in the old Beacon Hill Sack Cinema (before it was altered), in Cinerama (70 mm, 6 track audio), with the overture and intermission?

luftweg: The Boston Cinerama had an area exclusive during the initial roadshow run of “2001: A Space Odyssey.” The film did not play any other area theaters until many months later. For a breakdown of the film’s original run, see (Page 2 of): Still the Ultimate Trip: Remembering 2001: A Space Odyssey On Its 50th Anniversary.

MSC77: Thanx for the response. I definitely saw the film somewhere in ‘downtown’ Boston in 1968 when I was little. However, I guess I don’t remember the name of the theater (because for years I was ‘sure’ it was the Beacon Hill Theater — actually right up until just this last month!)… I do remember the presentation being called Cinerama (which didn’t mean much to me at the time, except that it was supposed to be ‘panoramic’)… The theater had a very curved screen which was behind a curtain, I believe it was a deep red velvet curtain…. It was a sort of scary experience…. I recall the spooky ‘overture’ music playing, and that the theater lights were turned pretty dark for it… Maybe I didn’t quite understand how ‘evil’ HAL was supposed to be, but I was actually sad for HAL when he said he was ‘afraid’ and dying…. Then, some many months after seeing the movie, I had a tonsil surgery, and when I was put under anesthesia, I had a a dream, which turned into a nightmare; I didn’t realize at the time, but it was a ‘modified’ version of the stargate sequence, where I was ‘falling’ down an endless tube lined with these flourescent blue-green spheres, which then turned to red as the speed of my falling increased (this was of course the nightmare part, and I awoke from it lying on a recovery bed with a very sore throat)… It seems that, if the roadshow was the only time back in 1968, when the ‘overture’ played, and if the screen was deeply curved, it must have been the Keith-Cinerama?

I saw 2001 in Cinerama the 1st time at the Seattle Cinerama theatre. I then saw it at the Golden Gate Cinerama a few weeks later. Both times I never figured it out. Seattle was a great Cinerama Theatre. The Golden Gate was OK. In San Francisco it was annoying because they kept passing Marijuana0 cigarettes up and down the aisles. No one stopped it. It was legal? to smoke in Calif. Theatres back then but only in the balconies. I was in the orchestra. It was a sickening smell. I couldn,t touch it be cause I was in my Navy uniform then. When I got back to the ship that night I must have reeked of green smoke. Nobody said anything. As far as the film in Boston it played at the Boston Cinerama for over 30 weeks exclusively. After that it played everywhere but in 35mm. Over the yrs it has played in 70mm reissues at the Beacon Hill, Coolidge Corner and Somerville theatres. Just a couple of weeks ago it played as a Fathom event in digital event at several theatres in the area.

luftweg The Boston Cinerama did have the large curved screen and was where I saw 2001 and several other movies. The theater was twinned but is still intact, except for the Washington St. hallway to the lobby and the fire escapes on Harrison Ave. Ext. and Haywood Place. It is the last major theater left in the district to not have been remodeled.

Direspaul…. the cinerama theater was twinned and was showing kung fu/chinese films when I lived there in 74. I think I have seen pics of the balconey cemented over? not sure. It would be so cool to see some pics inside now if it is still there as you say!

lufweg 2001 ran at the Astor in 70mm probably in 68 and from your description it sounds like you were at the Astor when you saw it. That was right before Sack started block booking everything released and the Astor couldn’t get first run films.

I stand corrected if it was 68 2001 would have been running at the Boston Cinerama Theater but it did run at the Astor probably right after the Cinerama run.