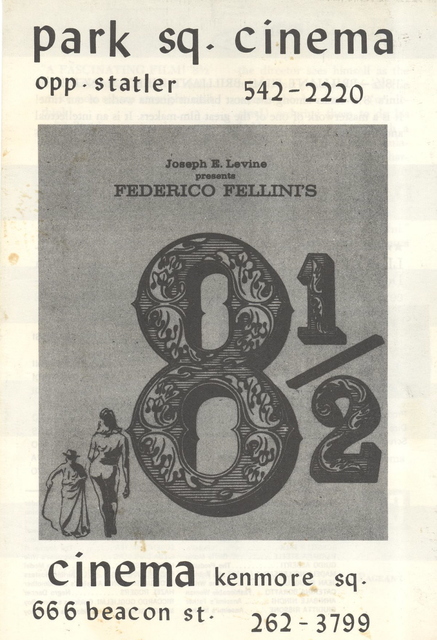 A small first-run art house right in Kenmore Square, built to replace the Kenmore Theatre when that was displaced by the Massachusetts Turnpike. It was built into a piece of a building in the early 1960s. It no longer exists as a movie theatre although the building it was built into is still there.

Thanks, Justin! I’ll look forward to those scans later in the Spring—my office wall has a perfect spot for one.

I’m sure I was one of those people dancing out of the theater after “Swing Time”. Good times.

I used to love going to the Kenmore and Park Sq. theaters, and the program posters were amazing! Let’s see, I remember lots of people in the audience crying at the end of Wuthering Heights, people falling out of the seats laughing during The Producers, (or was it just me doing those things?) seeing first showings I think of Monty Python and Kentucky Fried Movie. Wasn’t there another small cinema on Boylston, around where Pall’s Mall and the Jazz Workshop were? I might be getting that one mixed up with the Park, but one of those premiered The Bitter Tears of Petra Van Kant.
I also worked at Century III Productions in 1984-5, but it then was diagonally across the street, not at the theater space anymore.

The theatre you are thinking of was the Cinema 733, which indeed shared a building with Paul’s Mall and the Jazz Workshop.

Justin, I projected at the kenmore Sq in the 60’s also the Coolidge and the Orson Welles and many others in Boston, I liked the midnight shows and the Staff, Roger and Jeff and great chinese dinners into the wee hrs, best to you

Waked by there last week on a BU memory lane tour. When I was a BU resident at Myles Standish Hall in the 60s I remember going to see Polanski’s creepy “Repulsion” there with the then young and beautiful Catherine Deneuve. Think her “Umbrellas of Cherbourg” played there as well.

When a few cities in the US were getting MONTY PYTHON on TV but Boston wasn’t(1974), Justin saw to it we could see AND NOW FOR SOMETHING COMPLETELY DIFFERENT at the Kenmore Square Movie House, in a print that was a different edit from the version re-issued about six months later.

So all the PARK SQUARE memories are here! Who remembers seeing THE GANG’S ALL HERE(1943)at Park Sq. The Technicolor made my jaw drop.I looked in vain for more 40s Technicolor, but 3 strip processing was almost obsolete, and soon Fox would destroy it’s masters and replace them with blotchy looking Eastman color versions.

Getting back to Park Sq. Movie House memories, I was at the premiere program of INTERNATIONAL HOUSE and MAN ON THE FLYING TRAPEZE with W.C. Fields, and I subsequently frequented the Park Sq. as an escape from difficult parents, hated elementary school, and the humiliation of being a Bar Mitzvah boy who only looked eight years old.I dreamed of someday mounting stage shows based on the 30s musicals I saw there.Many of those films weren’t on Boston TV at all in the early 70s.I wasn’t there for the AT THE CIRCUS “Two Blind Loves” moment(I’d seen it already at “Good Time Films”), but I do remember loud, wild applause for Sterling Holloway, when he showed up in “Gold Diggers of 1933”-I don’t think that would happen today.

Bless Justin Freed for booking my comedy short “Chickens!” at the Kenmore to run prior to “And Now for Something Completely Different.” the pairing ran six months! The only drawback to the Kenmore was that they couldn’t show Panavision without chopping off the edges. Polanski’s “Macbeth” became “acbet” in the wide screen process of “inemascop.”