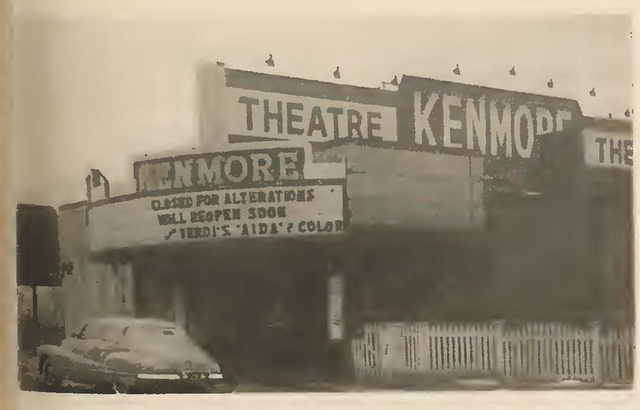 Opened around 1939, this was a first run art house just off Kenmore Square and was torn down (early-1960’s) to make way for the Massachsetts Turnpike leg that runs through the city of Boston. It is not to be confused with the Kenmore Square Cinema that replaced it afterwards and was located in the square itself.

Ron, there has to be some kind of error or misreading there. The French film The Baker’s Wife (La Femme du boulanger) released around that time, certainly did not have Irene Dunne and Charles Boyer. It starred Raimu and Ginette Leclerc. My guess is that they must have been showing a double bill of The Baker’s Wife with the Dunne/Boyer Love Affair.

Ron, thanks for confirming Joe DiCarlo’s number on seats. The balcony was actually street level. I’d love to see a photo of the theatre, , if you’d care to reply. Thanks again for your reminicenses.

As an aside and apropos of nothing, let me add this bit of nostalgia. As stated in a previous post, I worked at the Kenmore in 1950 or thereabouts as an asst. mgr.before going into the Army in 1951.
One day as the opening credits were being shown prior to the movie starting, the curtains refused to open. As the Kenmore had no stage hands, as other theatres did in that era, and the curtain being controlled by the projectionists in the booth, I wondered how to open them before the picture actually started. Putting embarrassment aside I ran down the aisle, jumped up on the stage, and with the help of a patron, dragged the curtains open. The few customers in the audience gave me and my helper a round of applause.
First and last time I was ever on stage.

Bravo to you, Jim L, for taking some action. And how big was the stage at the Kenmore? And to Gerry DeLuca: here is what is posted on the Kenmore marquee in the MGM Report photo— only the right side of the semi-circle shows in the photo. In the center are 3 short words arrange vertically, but I can’t read them. On the right, top line reads Now Playing 3rd Year in NY; middle line reads “The Baker’s Wife”; bottom line reads Charles Boyer Irene Dunne. The title of the Boyer- Dunne movie may have been posted on the left side of the marquee.

Ron, I think is was a very small stage compared to the other theaters of that era, but then it wasn’t a big theater to begin with.

As you may have noted, I also worked at the Uptown, at Huntington and Mass ave. for about three years. That stage was big by comparison but I understand that it was used for vaudeville many many years ago.

the Kenmore Theatre was right in Kenmore Square, near B. U., as I remember. It was modern-looking, and I saw a number of films there, including the Charley Chaplin films, West Side Story, and many others. Too bad it’s not there anymore.

I suspect you are thinking of the later Kenmore Square Cinema, rather than this one which was torn down when you were still pretty young.

Two standout memories of the Kenmore
1. “And God Created Woman” 1956 – Brigitte Bardot scandalized Boston in the first of her films to play the US. Even the poster outside the theatre was scandalous!
2. “Carry on Nurse” 1959 – the second of the “Carry On” series – absolutely side-splittingly funny in its day – made even more memorable because the management rewarded each patron a plastic daisy on exiting the cinema. (Spoiler: one scene utilized a daisy as a thermometer, one of the first memories I have of oft-used potty humor by the British.)

A fine three-page article, with plenty of photos, in and out, of the original Kenmore Theatre, appears in the “Modern Theatre” section of Boxoffice magazine in the June 4, 1955 issue, linked here:
View link

I was an usher in the Kenmore in 1942-43. The building had been a gym before it was converted into a movie house. The ushers changed into their N.Y. World’s Fair uniforms at the screen end of the left balcony. During the war, women from IMAS, the Immigrants' Mutual Aid Society, an association of German Jewish refugees, sold war bonds and war savings stamps in the tiny lobby. The box office was free-standing and was freezing cold in winter. The ushers changed the marquee three times a week, Saturday night, Tuesday night, and Thursday night. The manager most of the time the theater was open was a Mr. Cohn.