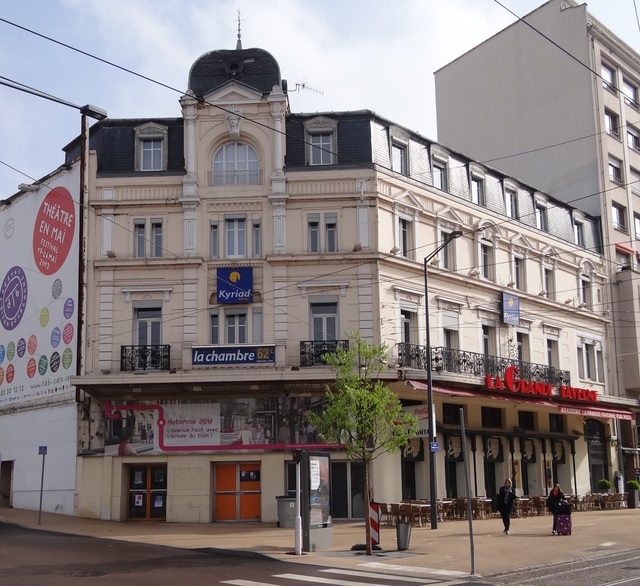 Apparently constructed sometime around 1860, the Casino was a large three-story block on an angled corner near the railway station. It contained a large music hall, and also offered hotel rooms and a brasserie. Entry to the music hall seems to have been through the restaurant.

Very early on, the Casino showed movies on an outdoor screen set up in the plaza in front of the building.

In 1905, the building was extensively remodelled, adding a fourth floor, and became the Hotel Terminus. The music hall and restaurant became the Grande Taverne. During the remodelling, the music hall was modernized, and increasingly used as a cinema.

In 1931, this cinema was the first in Dijon to show a ‘talkie’, with Al Jolson in ‘The Jazz Singer’ as the movie.

In 1954, the auditorium was again modernized, and the entry for the theatre was moved to the corner of the building, between the hotel entrance on the front, and the restaurant along the side.

In 1972, UGC took over management, and in 1976, the auditorium was split into 5 screens. At this point UGC closed two nearby cinemas to concentrate their business, and more efficiently compete with Gaumont.

Sold twice more in the 1980’s, the theatre closed for good in 2002. The hotel and restaurant portions of the building remain in operation.

Before the street was renamed sometime after World War I, the address was on rue de la Gare, quite natural as the railway station was located at the end.

Oh, I hope you aren’t. That sounds like a great amenity.