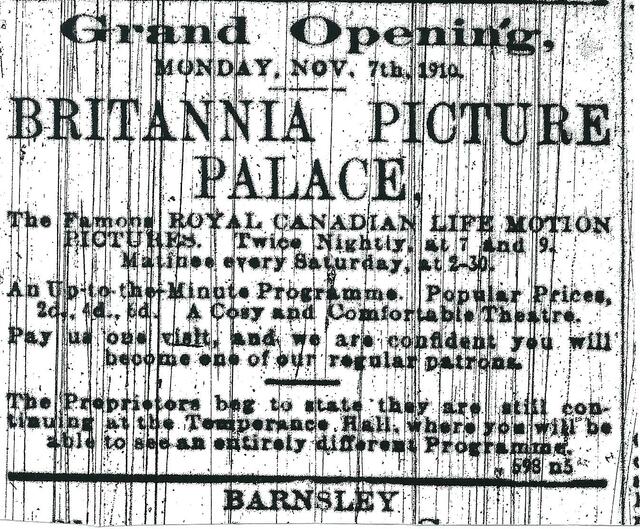 Situated off Sheffield Road, Barnsley, the Britannia Picture Palace opened on 7th November 1910 with “A Big Scoop”, “La Savelle” and “The Short-Sighted Errand Boy”, among other films.

Thought to have been a conversion of brewery premises, the modest brick-built building was 85ft in length and 35ft wide, with tip-up seats, in red leather and crimson velvet, on a single floor. In 1911 its lessee was Frank Seymour; subsequent owners were Barnsley Entertainments Ltd.

The name was changed to the Star Cinema when the licensee was Walter Pridmore. Ownership transferred to the Savoy Cinema Company in 1939.

Slum clearance in the immediate area, with residents being moved to the Athersley Estate, was a major factor in the Star Cinema’s closure on 29th March 1959, although manager Lewis Hobson also laid the blame on television and “tombola games” at the city’s working men’s clubs. The final films were “Carry on Sergeant”, starring William Hartnell, and Lee Paterson in “Man with a Gun”.

As Britannia Street no longer exists, it is assumed it was eventually caught up in the area’s slum clearance.