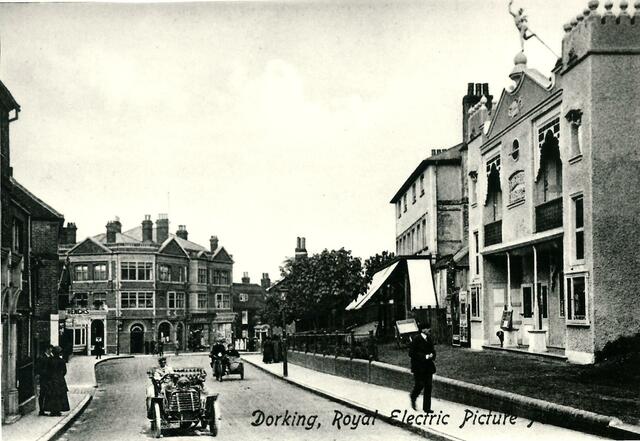 Situated on one of the main thoroughfares in Dorking, Surrey, the Royal Electric Picture Palace was purpose-built, constructed in the grounds of Stapleton House. It opened in April 1913. In the flamboyant fairground style of the times, the frontage was initially surmounted by a statue of Mercury. The auditorium measured 83ft by 32ft and there was a balcony and stage. The proscenium was 25ft wide. A Tea Garden also operated in the 1910’s.

The manager’s son, Mr Redford, has said that, at one time, the cinema was owned by a Mr King, presumed to be he of Shipman and King. Mr Redford’s father hand-cranked the projector and delighted in his job description of “bioscope operator”.

It was equipped with a RCA sound system around 1930. It is unclear when the various name changes took place, but, as the Regent Cinema, the cinema closed in 1938. The building was requisitioned during the war, then became a furniture store and auction room.

It was eventually demolished. An office block and parade of shops name South House occupies the site.