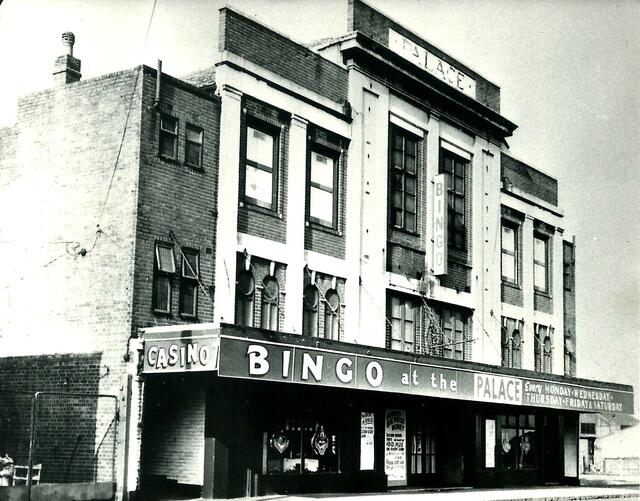 In Oldbury, Worcestershire, in 1910, Jas Tyrer spent £350 converting The White Swan public house into the Palace Cinema, which opened on Monday 7th November 1910 with a programme that included “Lady Helen’s Escapade” and “Fun on the Tom-Tom”. It was managed by the proprietor’s son, Billy Tyrer.

In 1913 the cinema had been formally renamed the Cosy Picture Palace, but it was informally known as “Tyrer’s Palace”. By now Mrs Tyrer was the proprietor.

On 17th April 1916 it re-opened as the Premier Kinema, having been reconstructed for new owner G. H. Gosling. This included the installation of a balcony: these 85 seats added to the 345 tip-up seats downstairs.

The cinema closed again in 1917, re-opening on 13th August 1917, as the Palace Theatre, with “East is East”. This latest name change was very short-lived as, by the end of that year, it had been renamed the Palace of Varieties, indicating an increasing reliance on live shows.

Some stability was restored towards the end of 1919 when it was acquired by Charles H. Dent, and he eventually replaced the building with a brand new cinema with seating for 1,050. The proscenium was 42ft wide, the stage 22ft deep and there were two dressing rooms.

The ‘talkies’ arrived on 9th December 1929 when a British Talking Pictures(BTP) sound system was installed, screening “The Trial of Mary Dugan”, starring Norma Shearer and Lewis Stone. The better known musical romance “The Broadway Melody” ran for the second half of the week.

Live shows were not completely abandoned, and variety shows were presented from time to time and by 1937 the New Palace of Varieties was operated by J.M. Dent.

By 1953 it had been re-named Palace Cinema and a British Acoustic(BA) sound system had been installed. The Palace Cinema closed on Sunday 30th April 1961 with a one day showing of “The Private War of Major Benson”, starring Charlton Heston.

It re-opened as the Palace Variety Club but, gradually, bingo took over from variety.

In the early-1970s it was acquired by the Noble Organisation, and run as a bingo club for a few years until it was closed and demolished.