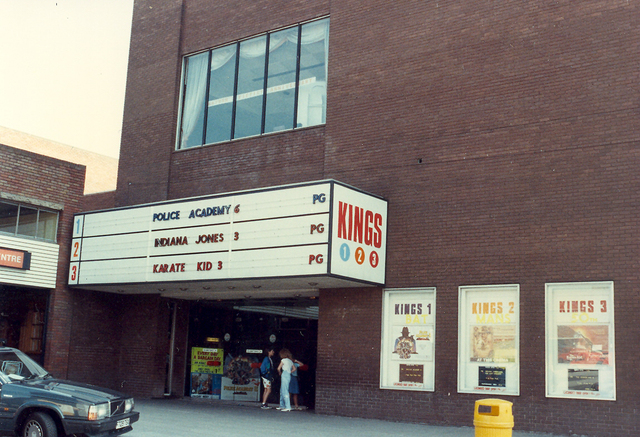 Built as a replacement for the old Kings Cinema (1914-1973) on Paradise Street. The ‘new’ Kings Cinema was part of the recently completed Kings Square shopping complex development in West Bromwich which opened on 21st March 1974. At a time when traditional circle and stalls cinemas were being doubled and tripled, the Kings Cinema was unique at the time, it being the first purpose built cinema specifically designed to host multiple screens. The cinema, throughout its life was operated by Miles Jervis Cinemas Ltd. It was opened on 28th June 1975 with “Shampoo” playing in the 320-seat Kings I, “The Yacuza” in the 280-seat Kings II, and on 20th July 1975 the 442-seat Kings III opened with “The Godfather, Part 2”.

The largest auditorium was located on the top floor, with two smaller screens on the lower floors; a licensed bar with a colour television was located on the front elevation of the building on an intermediate landing as you made your way up to the main screen. There was a small foyer which included a box office and concession stand on the ground floor.

The cinema continued until 8th September 2002 when it closed playing “Spy Kids” and “The Guru”. It is not entirely clear why the cinema suddenly closed, but it is suggested that access to the site was made difficult during redevelopment of the adjacent Bus Station and building of “The Public” arts centre close by. It is believed that during this time, the cinema voluntarily closed due to dwindling numbers with the intention reopening when construction work in the area was completed and full access was restored. The cinema did not reopen on completion of the Bus Station and Arts Centre project.

Around 2006, the ground floor of the building was converted to retail space with two units now occupying the site.

The building itself is in fact quite uninspiring, with an April 2010 planning application report describing it as “a large blank brick box”, “monolithic” and contributing “nothing to the quality of the environment”. It further states “The cinema closed in 2002 and it remains vacant on the upper floors”. Use of the upper floors appears to be hindered because “The lack of a ground floor frontage to this part of the building renders it undesirable for retail use”.

As at 13 January 2015, the former cinema is available to rent or buy. It has since been demolished and plans were put forward in September 2021 to build new flats on the site, featuring a ‘living wall’.

Miles Jervis, the Managing Director who opened the cinema in 1975 passed away on 14 September 2011 at the Marie Curie Hospice in Edinburgh. He was the President of the Cinema Exhibitors Association 1973-1974.

The Interiors of the Complex including the attached Nightclub was a design build carred out by Modernisiation Ltd., I was going to be the General Manager of the Cinemas. and visited the project regular. Which including studying the plans.. and the updates. etc I decided to stay with B T Davis Circuit.. Money was better..

Looks like some great extra information has been added to my original submission – Thanks to whoever added the screen capacities, first and last films!

I have uploaded some photos that were kindly provided to me by Gary Stevens who was the General Manager between 1986 and 1991.

Paul Jervis, the youngest but one son of Miles Jervis, then took the reins running the cinema from 1991 until its closure in 2002.

On the closure: The cinema faced increasing competition from the Showcase Cinema that opened off Burnt Tree Island in Dudley and the night-time dynamics of West Bromwich Town Centre changed – the town being almost deserted after 6pm. The High Street/Bus Station works overrunning also did not help matters.

After Miles Jervis retired, the business was passed to Paul Jervis who continues in the cinema industry today.

Thanks once again to Gary for the photos and information.

Frank Crane worked for us at the Penn Cinema Wolverhampton Prior to this and funny enough Gary went on to work at the Apollo (Regal) Leamington Spa. which used to be Ours..

I remember re seating the number 1 and number 2 auditoriums for Paul Jervis in 2001 with seat that came from the closed UCI Bayswater. The manager then was a guy called Albert who also showed the films.

Albert Timmins if my memory is right, Was 2nd at the ABC West Bromwich when I did cover their for Ray Adams.