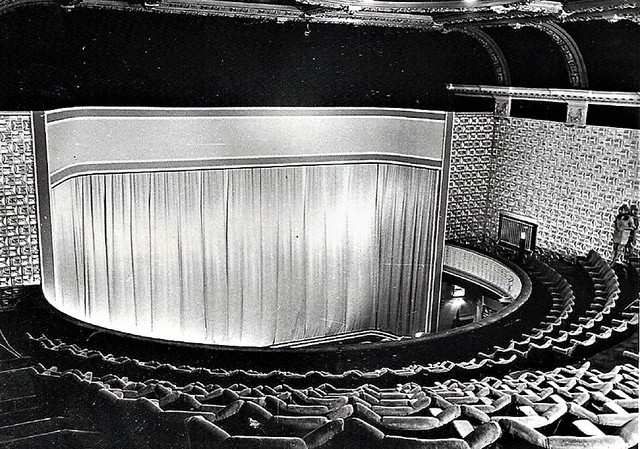 Kennedy’s New Empire Theatre was located on Paradise Street (today renamed High Street) West Bromwich in the West Midlands to the northwest of Brimingham. It was built and operated by Benjamin Kennedy and opened as a live theatre on 1st June 1914 with a variety show, which included films as part of the programme. It was designed by architectural firm Wood & Kendrick. Seating was provided in orchestra, dress circle and gallery levels. The proscenium was 30ft wide and the stage 44ft deep.

It was taken over by Mortimer Dent in 1927, reopening as the Plaza Super Cinema on 26th September 1927 with “Love Me and the World is Mine”. In 1929 it was sold to Associated British Cinemas(ABC) who installed a British Thomson Houston(BTH) sound system. It was taken back by Benjamin Kennedy in 1936 and renamed Plaza Theatre.

It reverted back to live theatre use re-opening on 27th December 1947 with the pantomime “Mother Goose”. From 1949 it began screening films on Sunday’s (when live theatre perormances were not allowed), but business soon declined when striptease shows were introduced as the main weekday shows in the 1950’s. It closed as a live theatre on 2nd February 1957 with a nostalgia music hall show named “Thanks for the Memory” starring Hetty King, Randolph Sutton and Billy Danvers.

The building was taken over by the Miles Jervis chain of cinemas and alterations were made by Modernisation Ltd. It re-opened on 11th March 1957 as the Kings Theatre with Robert Wagner & Terry Moore in “Between Heaven and Hell”. Occasional live shows were part of the programming when local operatic societies took over for a week at a time.

The Kings Theatre was closed on 28th April 1973 with “The Aristocats” and “The Legend of Young Dick Turpin”. It was demolished and a new twin screen Kings Cinema was built on nearby land.