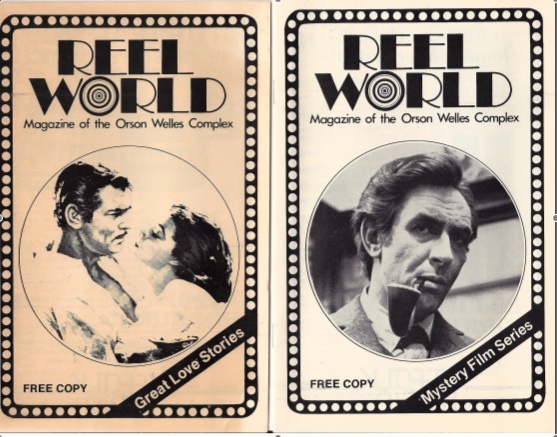 Opened as the Esquire Theatre on February 14, 1964. On April 8, 1969 the name was changed to the Orson Welles Cinema. Over the years two small additional screening rooms were added that were separate from the larger main auditorium.

The theatre specialized in first run art and independent films, and had some occasional revival series. On May 25, 1986 there was a fire in the theatre, and it was shuttered after that and the space put to other commercial use.

I remember watching “Performance” when the popcorn maker started smoking and we were supposed to evacuate the theater. But people were lagging behind to see the end of the movie. I also saw “Marat/Sade” “Night of the Living Dead” and “The Harder They Come” there. I seem to remember that “The Last Temptation of Christ” played there, but info on Wikipedia says theater burned in 1986 – two years before its release. Was I hallucinating?

Maybe you are thinking of “Hail Mary”, another film that attracted Catholic protesters.

The 38th Annual Science Fiction Film Marathon is coming up this week at the Somerville Theater. The first 11 years were held at the Orson Welles. This is the one ongoing remnant of the theater still in existence (save for our memories and a few scrapbook pieces of memorabilia!).

I went to the Welles' late 1973 Animation festival, which began with THE BETTY BOOP SCANDALS and continued with programs of pre-48 Warner cartoons which were hard to see on local TV then(The 50s Warner cartoons were the ones that were on all the time).

Is there any way to find out, with reasonable certainty, which films were shown at the OWC in 1979?

There is a way, but it’s laborious: looking through all the movie ads in the weekly Boston Phoenix or Real Paper, archived in the Boston Public Library (or perhaps elsewhere).

My head hurts just thinking about it.

Thought I’d give a description of the Welles' interior layout before memory fades even more. Six glass doors set in about maybe 3 feet from the sidewalk. Two doors on left were entrance which led directly to a small ticket seller booth on the left. Also a place where you could pick up flyers on current films. Small stairway then led up to the lobby with a larger stairway to the right for exiting separated by a small wall. Lobby had a erasable board at rear for film times. Entrance to Cinema 1 was on right which had aisles on left and right and only center section of seating (I think.) Cinema 2 entrance was straight ahead at back of lobby and was reached by a small flight of stairs. When you entered you were about halfway point of the house. Screen on the left and seats left and right plus another seating section across a center aisle. Cinema 3 entrance on left of lobby and to get to the house you went down a flight of stairs, took a couple of steps then up a small flight of stairs. Entrance brought you to very front of the house (I think) right in front of the screen. Snack bar was on very left of lobby with fresh popped popcorn, real butter for it, plus coffee (kind of a rarity at theaters then except art houses.) Plus theater t-shirts for sale. Wall along exit stairway had classic movie stars painted on it.

The Orson Welles Cinema concept began April 8, 1969 with We “The Immortal Story” and Luis Bunuel’s “Simon of the Desert.” The three-screen operation closed during May 25, 1986 showings of “Always,” Dreamchild,“ and "Water” as a fire broke out. After repairs for a 1986 fire, the Welles remained closed by CATE Enterprises Circuit due to insurance negotiations. The space was converted for other retail purposes.