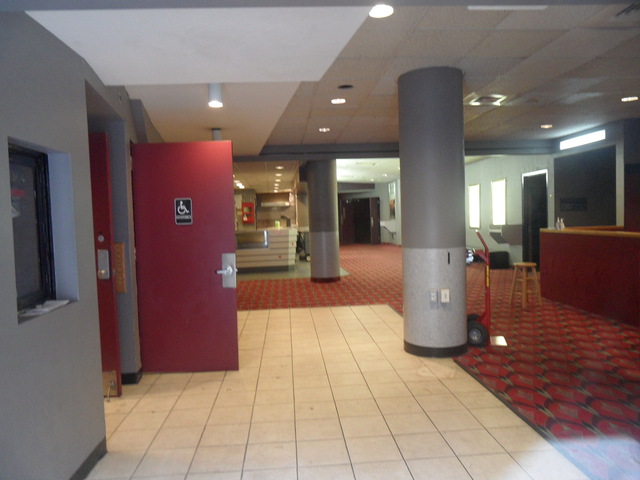 The University Theatre opened in November 1926 with 1,915 seats and a huge 40 foot screen. The lobby faced Mass Avenue, looking straight into the heart of Harvard Square. The balcony had box seats and a loge section with wicker rocking chairs and velvet cushions. The asbestos fire curtain had a scene of George Washington crossing the Delaware.

Decorated in a very reserved Italian Renaissance manner, with many murals, and two great organ grilles bordering the proscenium, this theater was built as the University Theatre, before changing its name in the 1960’s.

It became well known as an art house, hosting many special screenings and double features. Alfred Hitchcock screened “Torn Curtain” here, and directors like Sidney Lumet and Woody Allen have also used the theater. Concerts began in the 1960’s, with such notables as David Bowie, Iggy Pop, The Clash, and Bob Dylan.

The first US live performance of the ‘Rocky Horror Show’ also took place here, while the cult film itself found a home at the theater in 1984, after it’s old home, the venerable Exeter St. Theatre, closed. It still plays every Saturday night, with live accompaniment.

In 1981, the balcony was partitioned into two smaller screens. Additionally, the lobby was turned into retail space, moving the entrance around the corner to Church Street.

In 1987, two more screens were added one on top of each other on the former stage. Most of the decor is still in place, though hidden behind new construction and dropped ceilings. A mural for the awareness of Breast Cancer was painted on the side of the building recently, with space for the mural donated by Loews, who owns the building.

The Harvard Square Theatre was closed on July 8, 2012.

This reopened as Harvard Square on December 27th, 1961.

Also the 1927 ad has been uploaded in the photo section.

A night-time photo of the University Theatre (Harvard Square Theatre) from the early 1940’s was included in Episode 7 (A Strong and Active Faith) of Ken Burns' outstanding documentary “The Roosevelts”, shown last week on PBS. The marquee advertised “All That Money can Buy” (1941) and “The Clipper”. The photo can be seen briefly at the 22.55 mark of Episode 7. The narrator mentioned that one of FDR’s former Personal Secretaries went to a movie in Somerville, Massachusetts in July 1944 and saw a newsreel showing FDR after he was nominated to run again for re-election as president.She remarked on how ill he looked. Thanks to Dr David Guss at Tufts for confirming where the theatre was located.

What theatre in Somerville did she attend?

A correction on how the Theatre was split up. The balcony was divided down the middle. The main auditorium was never touched other than the balcony being sealed off. Theatres #4 and #5 were put in the backstage area on top of one another at right angles in back of the main screen. They built a long walkway down the right hand side of the building. They may have added on to the backstage area to give the theatres a better width. If you still look at the backstage area on Church St. the added on area has a slightly different color brick.

Even with the changes, this was still a first class place to go to.

Here is the article about the recently-opened University Theatre that appeared in the November 20, 1926, issue of Motion Picture News:

“WITH the opening of the University Theatre in Harvard Square, Cambridge, Mass., this week, Harvard University, oldest university in America, for the first time in its 290 years, has a theatre within its shadows. For years attempts have been made to secure permission to erect a theatre in Harvard Square, but opposition from business men and university faculty inevitably defeated the plans.

“Realizing the wonderful advance made in motion pictures and the importance of the position occupied by motion picture theatres, the conservatism which has kept theatres away from Harvard University has given way to a remarkable welcome to the new University Theatre and to its owners, Charles E. Hatfield, treasurer of Middlesex County and president of the University Theatre Co.; Lindsey Hooper, Boston financier, and Stanley Sumner, managing director of the new playhouse through whose efforts the company was organized and the theatre erected. Mr. Sumner’s success as owner of the Community Theatre in Newton, Mass., and other playhouses places him among the leading active theatre owners in New England.

“One of the features of the new University Theatre will be the showing of Harvard football game films the evening of the same day of the game. This has been made possible through arrangements made with the Pathe News.

“The University Theatre aims to co-operate with Harvard officials, with the Harvard Dramatic organizations and other Harvard clubs, giving a type of entertainment which will appeal to Harvard students as well as to the public and providing a means in Cambridge, for the first time, for Harvard students to present dramatics. From its location the theatre Mill draw its audiences not only from Cambridge and Harvard University, but from a dozen towns bordering Harvard Square, which have direct traffic communication to this important transfer center.

“Although the theatre is now open, some of the finishing touches remain to be completed. At the invitation opening of the theatre many officials, Harvard faculty members, and those prominent in the film business were present. The opening was scheduled for eight o'clock. Not until three o'clock was work started removing the stagings inside the theatre; not until six o'clock were the first tests made with the projection equipment. The seating of the theatre was being completed as the first of the audience arrived. Yet so smoothly was the program carried out that the audience, had it not been otherwise informed, would have thought the entire program had been rehearsed until finished. The curtain, reproducing the famous painting of Washington taking command of the Continental Army on Cambridge Common, has not been completed and will be shown later. It is 33 feet long and 17 feet 4 inches high.

“Beauty of Design and Decoration

“The theatre is of the Italian Renaissance period of architecture, inspiration for it coming from the Davangatti Palace in Florence, Italy. Walls of the lobby are of imported traverline and even the ticket booth is suggestive of the windows of some dark-eyed senorita of old. The decorative scheme is a rather free adaptation of blending of the modern with the Italian and Pompeian. Carpetings were specially designed to give harmonious setting to the furnishings.

“In the seating, an advance has been made towards comfort of patrons. The seats, specially designed, are slightly higher than the customary seat and with a little more backward tilt, and heavily upholstered, adding materially to the comfort of the patron, whether short or tall.

“The house seats 1,915. It has a single balcony of cantilever type. The ladies' room is finished in Georgian style, giving a restful effect. Lighting fixtures throughout the house are a combination of wrought iron and brass and there is an emergency current supply from batteries, should the commercial circuit be closed for any purpose for a short time.

“Special attention has been given the projection room, which is patterned after that of the Metropolitan Theatre, Boston, except that it is located above the rear of the balcony.

“The policy calls for complete changes of program Sundays and Wednesdays, with Pathe News, comedy and two feature pictures, one stage presentation, and an orchestra and organ. Performances will be continuous, with three complete performances daily. Seats are reserved only for the evening performance.”

@ Ron Newman: I was wondering about that too. Maybe the producers did not know either so they used that photo of Harvard Square instead.

Gerald Chan, the current owner of the Harvard Square Theatre, is facing pressure from members of the Cambridge City Council to soon declare his plans for the building. (Article here: http://www.cambridgeday.com/2017/02/28/seeing-cinema-empty-nearly-five-years-officials-are-losing-patience-with-owner/.)

Gerald Chan has now presented a plan to tear down this theatre and replace it with a new building, which will have two cinemas in its basement. The new cinemas would be run by the same folks who own the Somerville Theatre and the Capitol Theatre in Arlington. Thank you Cambridge City Council for putting needed pressure on this developer.

BIG DEAL – Perhaps it’s hard to believe that — in the days before mass media marketing — the arrival of radio’s THE LONE RANGER on movie screen’s across the country, was such an important event. Those of us who saw serials at our local bijous remember the excitement of actually seeing Superman, Batman or Captain America on the screen, but we may have been unaware of how important these brief fifteen minutes of film were to the smaller, neighborhood theatres.

Here’s a promotional handout for Saturday, March 19, 1938 at the University Theatre in Cambridge. Massachusetts. Look at the prominence given to the announcement that chapter one of THE LONE RANGER serial will be shown on that date. The title of the feature film, SERGEANT MURPHY starring Ronald Reagan plus cartoons are listed almost as an afterthought.