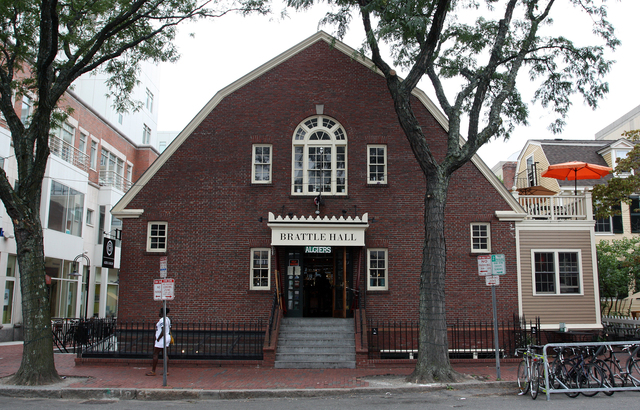 Brattle Theatre is located on the first floor of historic Brattle Hall, off Harvard Square.

Although the theater is primarily a venue for movies and concerts, it once hosted a live theater company.

Just out of curiosity, what kind of a group is “Department of Eagles”? I’ve never heard of them before.

The Brattle Theatre—yes..another great old theatre. We need it to stay open..forever and ever.

As of June 10, the Brattle Theatre now sells beer from Cambridge Brewing Company. They will soon begin selling wine as well.

Man goes crazy at the Brattel over an out of focus showing of The Sound Of Music:

Wow, I just saw this story – guy smashed the concession stand at the Brattle. Why? Because Sound Of Music was out of focus for five minutes. I can only assume he was denied a refund or something, but that’s still a poor reason to destroy property.

Fortunately, the Brattle was open and selling concessions as usual the following night when I saw The Princess Bride. Film nearly filled the theatre for a 9:30 show, too.

The musical “Godspell”, produced by Moonbox Productions, was on stage at the Brattle this weekend. The reviewer in today’s Boston Sunday Herald gives it high marks, except for the theater itself. Although the Brattle was originally a live theater, he implies that it’s not suitable for live productions today.

What an interesting life he seems to have led. Here’s an excerpt from the NY Times obituary:

Cyrus I. Harvey, a quirky entrepreneur who created two significant brands in disparate fields â€" Janus Films, a distributor of movies by international directors like Bergman, Fellini and Kurosawa, and Crabtree & Evelyn, the purveyor of aromatic soaps and botanicals â€" died Thursday in Dayville, Conn. He was 85 and lived in Woodstock, Conn.

Janus Films, founded in 1956, grew from his part ownership of the Brattle Theater in Cambridge, Mass., which he and a partner, the actor Bryant Haliday, had transformed from a live-theater venue to a movie house that showed the art films Mr. Harvey had grown to love as a Fulbright scholar in Paris.

Mr. Harvey and Mr. Haliday showed Janus films at the Brattle and at the 55th Street Playhouse in New York. They had named the company for a Roman god usually depicted with two heads facing in different directions.

On a visit in July 2012 I was told the Brattle used to be a lecture theatre for Harvard University, becoming a full-time cinema in 1950. It has 235 seats and, unusually, uses rear projection, with two 35mm projectors on changeover. The programming is extremely imaginative; the staff very welcoming. A lovely cinema!

Not sure it’s mentioned in the comments but The Brattle was considered the birthplace of the Humphrey Bogart cult of the 60-70s. No revival house was without a Bogie double feature somewhere on it’s schedule.

daBunnyman is correct: there was an enthusiastic Humphrey Bogart cult at the Brattle in the 1960s. In his on-screen roles, he was considered the epitome of “cool”.