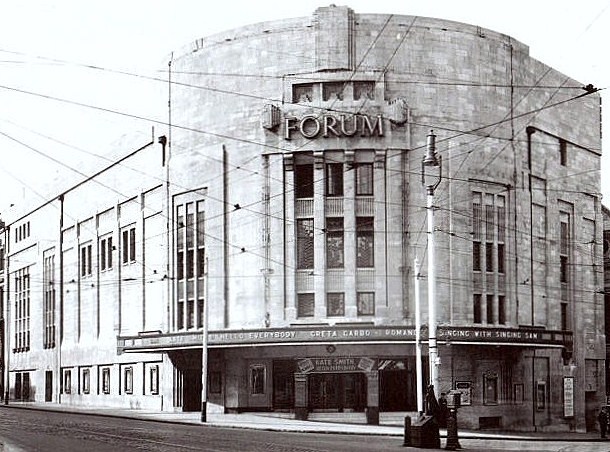 Opened as the Forum Cinema on 16th May 1931 with Clifford Mollison in “Almost A Honeymoon”. It was designed by architects William Riddle Glen and Alfred Ernest Shennan for Associated British Cinemas(ABC) at a cost in excess of 200,000 pounds.

A massive six-storey curved Portland stone façade remains a distinctive and highly prominent feature of Lime Street - one of Liverpool’s major thoroughfares and across the street from Liverpool Lime Street Railway Station. The foyer was lined with Italian marble.

The auditorium, in a semi-Atmospheric style, depicted Venetian scenes, contains an amazing proscenium treatment consisting of a vast curved canopy over the arch and the side boxes. Indirect light light was a feature, except for a huge ‘sunburst’ light fitting above the balcony.

A shallow stage was provided together with a Compton 3Manual/12Ranks organ on a lift in front of the stage, which was opened by organist Reginald Foort.

Because of the relatively small width of the site the 1,835 capacity was achieved by having a huge circle containing 750 of the seats.

It was re-named ABC from 17th February 1971 and due to its opulence and excellent location the cinema survived intact until 1982 when it was converted to a three screen operation by installing two mini-cinemas under the balcony seating 272 and 217 seats.

From 1986 it had been re-named Cannon. It closed on 29th January 1998 with a special screening of Humphrey Bogart in “Casablanca”, when a special admission fee of 50p was charged.

There were proposals to convert the building into a conference centre, but these stalled and the building has stood empty since closing. Proposals were put forward in late-2007 to convert it into a ‘boutique’ hotel and supper club, with plans going to Liverpool City Council in July 2008 and if permission was granted, work could start in late-2008. The building remained unused and was de-tripled in 2016. 22 years after closing, the building still sits unused in 2020.

It is Grade II Listed building.

Is this the big cinema behind The Empire Theatre. If not what is the huge place i see on Google maps?

The place directly behind the Empire Theatre is the former Odeon – it was closed in 2008. The Forum is at the other end of Lime Street – as you move down it you can see the railway station roof on the right. Immediately after the station is a single square tower block, and opposite this diagonally is a large building with a curved front (in the image I can see on Google Maps there is a red bus and a green/white bus turning right in front of the building). This is the old Forum cinema.

It was one of the sites used for the Liverpool Biennial of 2016. It’s been de-tripled and all the ground floor seating has gone. Apart from damage caused by the de-tripling, the interior is in a sorry state, with an alarming hole in the ceiling. The public were not allowed to go upstairs. https://www.flickr.com/photos/44435674@N00/28244733645/sizes/l