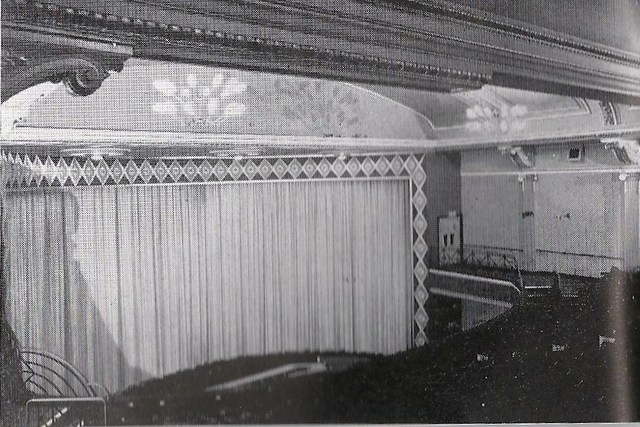 Opened on 16th September 1912, the Lime Street Picture House was a very upmarket city centre cinema with a tiled Edwardian facade and 1,029 seats in the stalls and circle auditorium which was richly decorated with plasterwork in the French Renaissance style. Dummy boxes with a riotous pediment were either side of the screen opening and looked down into the orchestra pit. The lower walls were panelled in a dark oak wood. An unusual feature for such an early cinema was the provision of a lift for the circle patrons. There was a cafe-lounge located on the first floor. It was re-named City Picture House from 14th August 1916.

In 1920 the City Picture House was renamed the Futurist Cinema, a name the closed and derelict building still bears.

The Futurist Cinema was very popular and managed to retain its hold even after competition from the huge Paramount (Odeon) and Forum (ABC) opened which sometimes forced the Futurist Cinema into taking off-circuit films.

Later, in 1960, the Futurist Cinema was acquired by ABC and was equipped with 70mm/Todd-AO re-opening on 10th July 1960 with Gordon Macrea in “Oklahoma” which ran for 20 weeks. It became ABC’s roadhouse cinema for extended runs of features such as “Earthquake”.

Eventually, as ABC tripled their main cinema (the ex-Forum directly across the street), the Futurist Cinema was closed on 17th July 1982 with Mel Brook’s “History of the World-Part 1” and “Blazing Saddles”.

It has not been used since and the condition inside is very poor. In 2014 plans were proposed to demolish the cinema to build student housing on the site. This has stirred the local population into trying to save at least the façade of the building. In 2016, the façade was deemed to be structurally unsound, and by May 2016, the pavement in front of the building has been cordoned off, with pedestrians now having to cross over the other side of Lime Street to get by. Liverpool Council appear to be on the side of the developers, and despite two orders from the Court of Appeal to retain the façade, these are being ignored by the City Surveyor. An appeal to save the building was denied by a court ruling on 2nd August 2016, and demolition began in the early hours of 3rd August 2016.

Hi Picturedrome, Iv'e finally managed to get my photo on site, thanks to Dr Beryl my niece. Please click on the photos tabs.

Hi, I am directing documentary surrounding the original cinemas in Liverpool. As most of these once thriving buildings have been left to decay I am hoping to tell there stories through the people who remember them. If you would like to contribute towards my documentary (“The Dream Factory”) please email me L.HarringtonCineplex Odeon Winston Churchill 24.ljmu.ac.uk Thank you for reading, let’s tell their story. Laura

.uk as my email address above doesn’t show!

I’ve uploaded my latest photo of the Futurist which I took today. Thought for a second it had reopened with ‘The Day Of The Triffids’ with all the plants that’s growing out of the building.I visit Liverpool at least once a year,and it looks worse every time. Please just click on Photos.

Was in Liverpool to perform and took a look at this old cinema near where I was staying. What a great old building this is, sadly with foliage growing off the roof and top floor. Apparently it is slated for demolition and there is an effort underway to save it. A sign on the front of the building directs those interested to go to change.org and search for “futurist liverpool” and sign a petition.

So sad it is being demolished. I was interviewed there by George Evans the district manager for ABC in 1967. At the time of my interview, the film being shown was “A Man for all Seassons”.

Saw a number of 70mm films there. The 70mm equipment was Philips DP70 projectors with Peerless carbon arcs. Chief operator for many years was the late Eric Norgate.

I saw THE GREAT ESCAPE and ALFIE there in the 1960s. I remember that it has a very impressive size Scope screen in its wide proscenium.

This was a better place to see a movie in than the ABC Forum over the road, which had a far smaller proscenium and was not ideal for Scope movies

I don’t think anybody’s said who it was built for or who the architects were.

The Lime Street Picture House was Liverpool’s third purpose-built cinema, after the Kensington Picturedrome, and the Bedford Hall in Walton. It was built by W. Wade Sykes between 19 March 1912 and September 1912 for New Century Pictures, owners of the New Century Picture Hall, not far away in Mount Pleasant, and was designed by the company’s resident architects, C.C. Chadwick & Wm. Watson, of Albion Street, Leeds.