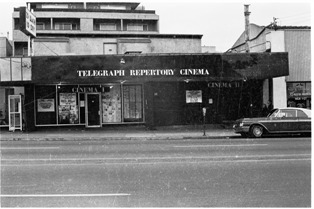 One of Berkeley’s notable venues of cinema during the late-1960’s into the early-1970’s.

Originally located several doors south of the above-listed address, it moved to a former apartment building and remained there into the late-1980’s. (The older location operated for a short-lived time afterwards, first as Flickers! and later as the New Studio Guild.)

For a brief time before its closure it was known as the Cave.

I knew Alan Blanchard during the months just before, and following, the People’s Park incident known as “Bloddy Thursday.” Alan was working as a carpenter on the Telegraph Repertory Theater, and he went up to the roof to see what was going on after he heard all the commotion on the street. An Alameda County Sherrif opened fire, blinding Alan and killing James Rector with shotgun blast. Does anyone know where Alan is now?

I began working there a few months after alan was shot.
I believe Bloody Thursday was in May 69? I started at the theatre in October 1969.

Try Googling Alan’s name I think he is still around.

Frank P Nimz was the technical wiz who made it work. Silicon valley before it was invented. He built the Projection systems . Had a company called ARC Labs He was a good friend who I would love to hear more about we lost touch in the mid 80’s Designed a system to beat roulette on a programmable calculator. I think He Died in 1999 Camels and Pepsi and Excedrin will take a toll.

He had a Bendix analog computer in his House in Pleasant hill 1300 vacuum tubes and a Mag Drum.

It should be noted that the photo above is of the original Telegraph Repertory Cinema (which later became Flickers/Studio Guild), the address shown above is that of the later location, just north of the original.

gsmurph. Yes this was the original Telegraph rep. Cinema 1 and 2 The address up the street was also the Telegraph Repertory cinema, Cinema 3 and 4 .. I helped build it … I ran the projectors … 16mm only up the center stairs cinema 3 left 4 right. I only know what happened up to about 1974

one night early seventies we saw Romero’s original “ Night of the Living Dead ” at the Telegraph Rep. must have been at the original location, because i actually remembered it as being above and behind shakespeare books, nw corner of dwight & telly! definitely not at the address in the photograph. i saw a lot of films in brkly and sf this era.

slagheap one night early seventies we saw Romero’s original “ Night of the Living Dead ” at the Telegraph Rep. REPLY I was the projectionist for that showing, (if it was the first time we ran it) It was in cinema 1 , it was shown on single reel 16mm It was a scary film even after seeing it for a week 3 times a day. The Theatre on the left in the photo above

This was my family’s favorite late Saturday night stop. They had midnight movies, often classics. Each night there would be several hundred fliers out front. Everyone took a handful. The audience really participated, booing or shouting. I recall seeing North by Northwest. When Cary Grant grabs Eva Marie Saint, the screen was inundated with wadded up fliers and calls of male sexist pig. This was in the late 60’s or early 70’s, when afros were the rage. One couple came in late, the guy had the biggest afro I’d even seen. The theater became quiet except for the sounds of paper being folded. Very soon the air was full of paper airplanes targeting his afro. He soon left. Thanks for the memories. It’s a shame it closed

My name is Stephan Blanchard, and I am the daughter of Alan Blanchard. My father passed in 1999 of colon cancer. He never discussed personal things with me. And wanting to know about where I came from, I have been doing research about my dad. I was told growing up that he was blinded in an accident at work, and that was it. I just learned of the shooting two days ago while researching. I would love some insight on who my father was before this accident. If anyone who had posted previously that they knew my father would like to get in contact with me, I would greatly appreciate it.

Stephan Blanchard, I am Enrique LaRoche Pretty easy to find , enriquelaroche.com use the contact form