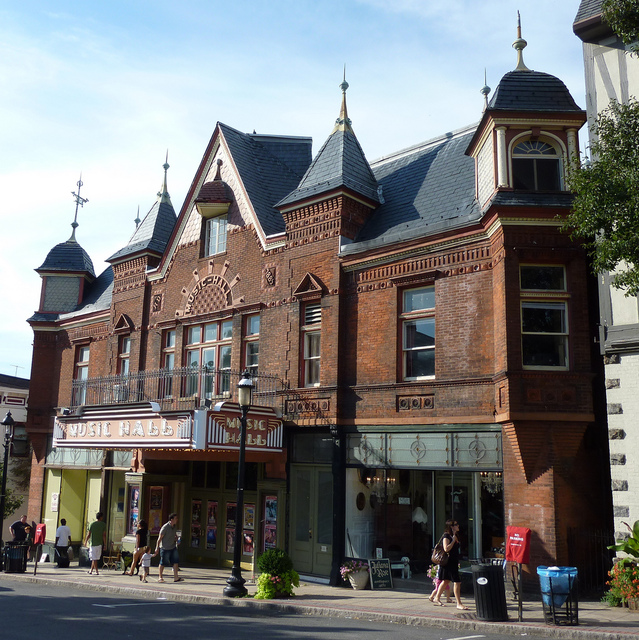 Built in 1885, the Music Hall opened as a multi-functional facility. I first saw the theatre in 1997. The theatre was dark the day I was passing through Tarrytown (today renamed Sleepy Hollow), but luckily someone was working on the marquee. He told me I could look inside. It was beautiful, and like most facilties built during this period, it contained lots of beautiful wood. I’ll never forget the long metal collar ties (beams) spanning across the upper portion of the auditorium.

Rather than ramble on, I’ll suggest a visit to the official website for more facts. You’ll immediately see an exterior photo on the “home” page. For some interior photos, click on “rental”.

The Music Hall is listed under Tarrytown in the 1897-98 edition of the Julius Cahn Official Theatrical Guide. George Vanderbilt was the Mgr; there were 900 seats, and admissions ranged from 35 cents to 75 cents. The theater was on the ground floor and had both gas and electric illumination. The proscenium opening was 26 feet wide X 24 feet high, and the stage was 35 feet deep. Newspapers were the Tarrytown Argus and the Sunnyside Press. Hotels for show folk were the Franklin House, Perry House and Germania House. The railroads were the New York Central & Hudson River, and the New York & Putnam. The 1897 population of Tarrytown was 9,000.

Thanks Ron for your usual great imput on theatres.

Was the Music Hall the only theatre in Tarrytown? This article was in the Nov. 4, 1982 Aiken, SC Standard:

NEW YORK (AP) — The board chairman of Warner Communications has denied a federal prosecutor’s allegation that he and other executives “schemed to defraud the company” through a secret $170,000 cash fund. Assistant U.S. Attorney Nick Akerman told a U.S. District Court jury Wednesday that Warner chairman Steven Ross designated Solomon Weiss to oversee the “secret cash fund.” The fund consisted of $170,000 in “bribes, phony invoices, false, fraudulent and misleading documentation and Warner checks for nonexistent services” related to a now-defunct motion picture theater in Tarrytown, N.Y., Akerman said. Weiss, 53, a Warner assistant treasurer from Hillside, N.J., is on trial on charges of racketeering, fraud, perjury, obstruction of justice and the preparation of false corporate tax returns. In return for cash bribes, Weiss “and other Warner executives arranged for Warner to purchase stock in the Westchester Premiere Theater,” Akerman charged Wednesday. “Mr. Ross unequivocally denies any authorisation, participation or knowledge of any secret cash fund,” said Warner attorney Martin D. Payson. Court documents have shown that Ross was a subject of the investigation, but he has not been named as a defendant and no charges have been filed against him. Weiss' indictment stemmed from an investigation of the bankrupt theater in Westchester County. Several men identified as members of organized crime have been convicted of skimming cash from the theatre and driving it into bankruptcy. Akerman said in opening statements Wednesday that he will prove Weiss accepted a $70,000 cash bribe from theater representative Leonard Horwitz in May 1973. And he said he intends to show that Weiss made a second secret deal a month later to have Warner buv more stock for $100,000. When the theater could not pay off, Weiss put together a new deal involving Warner issuing checks to the theater totaling more than $150,000 over four years to theater representatives for services never performed, Ackerman said.

Here is the first of five pages of photos depicting the Tarrytown Music Hall.

The design of this theater is usually attributed to architect Philip Edmunds, but the book A Guide To the Gilded Age in Westchester, published by the Hudson River Museum, cites an item in a contemporary issue of New York Real Estate Record and Guide which names Theodore W. E. De Lemos and Ernest W. Cordes as the actual architects. The firm of De Lemos & Cordes was formed in 1884.