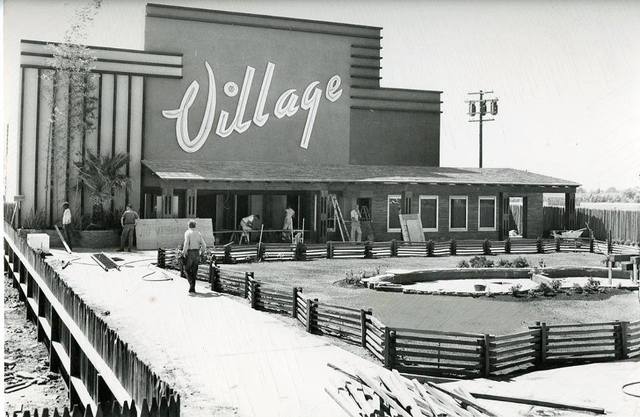 The Village Theatre opened on July 1, 1949 with Ann Blyth in “Red Canyon” & Olga San Juan in “The Little Witch”. It closed as the Village Cinema in 1985. It then lay unkept and covered in graffiti with a portable chain link fence in front of it.

The Village Cinema was demolished in 2006.

This theatre is being used as a Bingo parlor.

A new Bingo parlor was built behind the theater at Fulton and Marconi – near the post office. I’ve been interested in that theater for some time. Been closed since I first saw it in 1985 – hasn’t changed. Where can I get historical pictures of the place?

Also, no one has mentioned the torn down theater that was at Marconi and Watt that is now a Raley’s. They played new movies and we never paid more than $3.00 and that’s when movies cost $7. I was sad to see that one go too. The Sacramento Inn was a huge loss, asbsolutely gorgeous. Ladies, remember the bathrooms in there? Each stall had it’s own sink. The whole building was art deco and to die for and now it’s nothing.

The Village Theater (as it was known before changing to ‘Cinema’)is currently being torn down and will be completely gone by Christmas 2006. The building has been vacant for the most part since “The Palace Bingo” parlor moved out a few years back. Slowly becoming an eyesore it seemed only a matter of time. As a kid I spent many Saturdays in the Village where Dad would sent me with 50cents… 35 to get in, 10 for popcorn and a nickel for candy. Fond memories as yet another local theater bites the dust.

I snapped a somewhat good photo of it back in 2004 when I added this theater to the site. You can find the photo here.

A photo of the auditorium of the New Village Theatre in Sacramento was featured in an ad for Heywood-Wakefield theatre chairs in the April 1, 1950, issue of Boxoffice. The house seated 903 on opening, including 199 loges.

It’s impossible to tell from the black and white photo in the magazine, but the murals in the auditorium which look like fairly stark, two-tone silhouettes of trees and flying birds, might have been more complex than the photo reveals as they might have used the black light techniques then in vogue.

The construction of the building was unusual as well. Ceiling beams that appear to be of laminated wood curve at the wall and descend to the floor like thin internal buttresses. I wish I could have seen this theater before it was demolished. I’ve never seen anything quite like it.

The Village was originally part of the small, regional Harvey circuit, operated by Julian Harvey.

Box Office Sept 25, 1954 “Julian Harvey of the Village Theatre in Sacramento comments that his projection booth is "so full of scopes” that he’s prepared for whatever else comes up. He recently installed Perspecta sound and described it as “really terrific.”“ Julian Harvey was a brother to Rotus and Rodda Harvey who ran Westland Theaters (Laurel, Manor, Sage, Stockton, more…). Julian was responsible for the1940s remodeling of the Victory Theater in San Jose. Julian owned and operated his chain separately from his brothers and theaters owned by his brothers-in-law, but they frequently shared a SF-based booking agent, shipping prints between theaters.

Street View has been “updated” to the wrong location. If you pan left, the move back down Fulton Street a few mouse clicks south, you can see a parking lot in between the gas station on the corner and the large development to the north. That’s where the Village Theatre was located. Looking directly at the parking lot, zoom in and you can recognize the buildings to either side of the theater looking almost exactly as they appear in the 2004 photo cubey linked to in an earlier comment.

Here is a link to the Heywood-Wakefield ad with the photo of the Village Theatre’s auditorium, in Boxoffice of April 1, 1950.