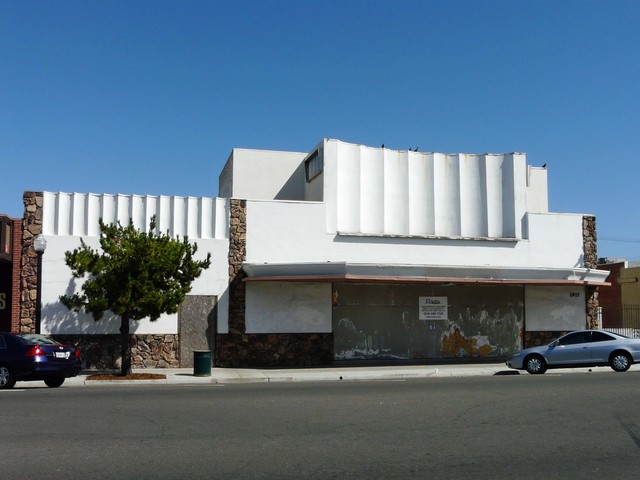 Located in the North Sacramento district, the Grand Theatre was opened by Blumenfeld Theatres on May 15, 1942 with Robert Taylor in “Johnny Eager” & Gene Autry in “Home in Wyomin'”. It closed in 1960. In recent years it was being used as a church.

This theater is no longer being used as a church. A few months ago I was nearby so I walked over to it and it was boarded up. Then yesterday, the merchants of Del Paso Blvd. were having an open house/block party of sorts that I went to. The theater is still boarded up, but there’s a sign that reads “Coming Soon The New Grand Theater”. The sign also says “Dining Entertainment Movies” so perhaps it’s being converted to one of those lounge type theaters where you can order food. I’ll keep you posted.

A recent photo of the Grand Theatre. And there’s a brief announcement near the top of this web page that says that the Grand will be reopening soon and will feature “supper, film and performance”. No date is mentioned.

Here is a vintage photo:
http://tinyurl.com/c686mx

The Grand Theatre’s marquee in the photo dated 1941 advertises “They Died With Their Boots On” which was made in 1941 but was not released outside New York City until January 1, 1942, according to IMDb. The Grand must have gotten it even later. Boxoffice of April 4, 1942, says “Blumenfeld circuit’s Grand in Sacramento will open May 1.”

Tom Spaulding’s NorCal Explorer (item about 2/3 of the way down the page) gives the actual opening date as May 15, 1942. A war-related delay, I’d imagine.

The web site I linked to two years ago is unchanged, still saying the Grand will be reopening soon. This is probably not a war-related delay.

I would sure appreciate any pictures or recollections/memories of the Grand and it’s interior. My partners and I are looking into reopening the Grand as a mulit-venue theater. We would ideally like to restore the Grand to its former glory with the addition of modern equipment. Any help would sure be welcome. Thank you.
Joe

Dear Svogar, I do hope you find a way to open the Grand. I’ve dreamed of it happening so often. I am in NYC now, but will fly back to the opening day if you ever get it opened. It would help if Del Paso Blvd. were to generally improve and become a new hot spot. An operating theater would help the area get there.

Does anyone know the current status of Svogar’s efforts to reopen the Grand?

Unfortunately my Father Svogar passed away June 20th 2016 before his dream to reopen this theater were fully realized. I am his eldest son, and know that getting his hands on that theater and reopening it was a dream of his that, from the looks of it, will never be truly realized.

Sorry to hear Svogar didn’t realize his dream. But if anyone is interested this theatre was sold earlier this year. The link is below but if you’re like me and don’t do links from strangers then just go to the Sacramento City’s Council’s website. Click on archived meetings and scroll down to the meeting date 2/6/18 & click on agenda. Here’s the link: http://sacramento.granicus.com/MetaViewer.php?view_id=22&clip_id=4137&meta_id=513798