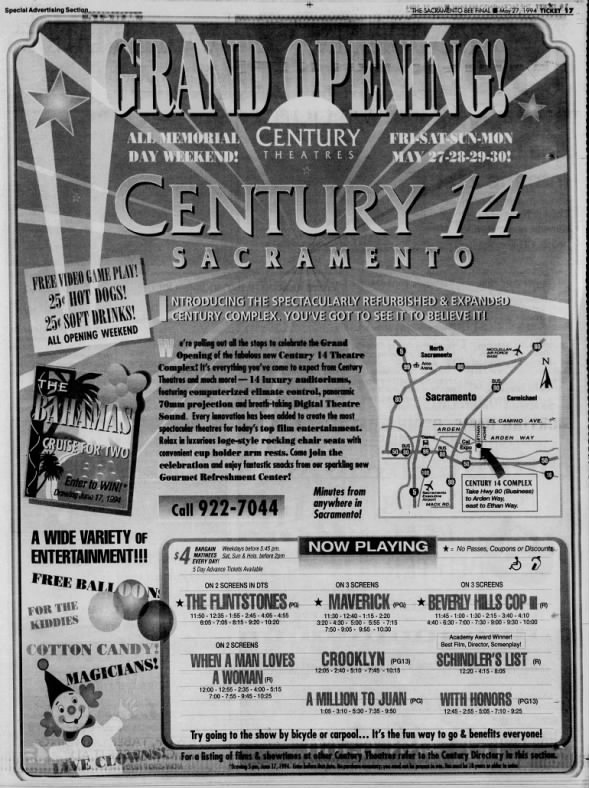 The guys told me they have a higher res version of the “The Last Days of The Domes” at https://vimeo.com/180076948 ,it does look and sound better…enjoy…

Here is a documentary celebrating the life and demolition of the Sacramento Century Stadium 14 domes, Camelot is shown playing inside on the screen for example, thanks Chad!…The Last Days of The Domes – MAB Telepictures Special https://www.youtube.com/watch?v=RHU7TjFt678

the above link is the demolition crew bringing the dome down. this is tragic. it looked like a great place.

the Replacement theater opened offically yesterday: Century Arden 14 and XD 1590 Ethan Way, Sacramento, CA 95825 just south of the old main building, retangular box with a corner tower, sort of art deco with luxury seating. Only a couple of the old employees are back.

This theatre has now closed and is in the process of being demolished. A new 14 screen will be constructed on this site. It is projected to open in late 2016.

Prior to adding the 8 box houses, the numbering scheme was: the front split dome was the Century 21-22. The other split dome with the two smaller domes were the Century 23-24-25-26. After adding the box theaters, they were numbered 5 through 8. Century Theatres regional office was in the Century 21-22. As a side note, the FAA required the theater to add lights to the roof because of it’s proximity to a nearby airport. The lights, when they were operational, gave the site a unique look.

Oh, the memories! This is one of the great Sacramento landmarks.

They took one dome down yesterday, the solo one with two screens…the others will stay up till the new movie complex is built.

They are redoing/doubling the whole complex area (the motel 6 is torn down) and the permit is open since Nov 14, 2014 to tear down the theater complex and replace it with a new Cinemark movie complex boasting 14 screens in place of the old domes…I went there to see Star Wars a few times before it was generally released…

Whether a company advertises two theatres as one, while historically significant to the way we’ll remember it, seems irrelevant to me. It’s still two separate theatres. In San Jose the domes are referred to as “Movies on Winchester” but they’re 4 separate buildings and four separate theatres.

But yes, I agree, the mods will need to decide on this.

Cinemark advertises the whole complex as a single operation called Century Stadium 14 Sacramento, and I don’t know of any open theatres listed on Cinema Treasures that aren’t listed under their current operating name (unless they’ve not yet been updated, of course.) I don’t know of any open theatres operating as single complex that are listed on two separate CT pages (except by accident) either.

I guess the mods will have to decide what their policy will be about this complex and its peculiar arrangement. I’d be inclined to just list it under its current name and then have a single paragraph describing the situation of its orphaned building. But right now this page is like a tail wagging its dog.

Oy, this location is so hard to describe to people who haven’t been there. This listing for the Century 21 Theatre is now considered to be screens 13 & 14 of the Century Stadium 14, but is a separate building than the other 12 screens.

These two screens are essentially the original Century 21 theatre, and were operated independently of the 12-screen “Complex” until about 2003.

The other twelve screens are part of the original Century 22 theatre, which started as a single dome, then had two smaller domes added similar to the Century 22 in San Jose. At some point, the large dome of Century 22 Sacramento got split in half, and when they expanded the complex in 1996? they added 8 more screens and a new entrance, box office, snack bar and restrooms.

It’s the same theatre. The page needs to be updated.

The number of screens is 14, of course.

It is now owned by Cinemark, which swallowed up most of the Century chain.

And of course we can add Scott Neff’s information that the architect was Vincent G. Raney.

I don’t understand. Is this a different theater than the Century theater down the street on Ethan avenue with dome shaped theaters? Because that one has a different name and location.

Vincent Raney was the architect for these theatres.

Both large domes had 70mm when they opened- the 21 opened with the reissue of “Gone With The Wind”, and the 22 opened with “Camelot”. I don’t know what the last films shown in them before they were twinned were. One of the smaller domes also has 70mm, though it hasn’t been used since “True Lies”.

I don’t believe any of the domes were built for Cinerama or D-150. The Century 21 in San Jose was built for 3-Strip Cinerama but it was never installed.

Were these Cinerama or d-150 theatres?