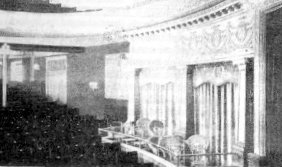 Opened in 1907 as Erba’s Theatre located on Collinsville Avenue, this theater was later renamed the Empress, and lastly, the Avenue. It was remodeled in 1931 and operated until 1952. It last housed an Asian restaurant, but has since been closed and demolished.

This is from Boxoffice magazine in January 1946:

EAST ST. LOUIS-A fire caused damage estimated at $5,000 at the Avenue Theater here recently. Most of the damage was from smoke and water. The fire was confined to stage properties and the contents of a room used by stagehands. The theater, owned by Dave Komm, continues to operate.

I have some newspaper ads for the Aveneau Theatre from 1907, would this be the same theatre?

Thanks Chuck, this Aveneau Theatre must have been a different building, and also carried with it a different spelling.

No, it gives the phone number Bell East 2646 and one of the ads states the following. Re-opens Sunday March 15. Aveneau Theatre E. St. Louis IL.

I have a photo of this theatre that I hope to get high quality scanned and entered here before long. It was given to me by a 95 year old gentleman who now lives in Atlanta and is a good friend. He attended this theatre in the 1920’s. The photograph shows a two story building with the words Avenue Theatre at the top and a overhanging marquee with “Erber’s Vaudeville and Photoplays” on the side and “Erber’s” on the front. There is a horse and wagon in front of the theatre.

The caption on the photo, which seems to be a promotional photo of some sort, is “Erber’s Avenue Theatre, East St. Louis Leading Playhouse.”

According to my friend, the music in the theatre was a piano. He only heard theatre organs in St. Louis when they’d cross the river.

He also tells me of another community theatre in his area that is not listed here and of the time when “talking pictures” came to East St. Louis.

The Avenue Theatre was listed at 219 Collinsville Avenue in the 1912 East St. Louis City Directory.