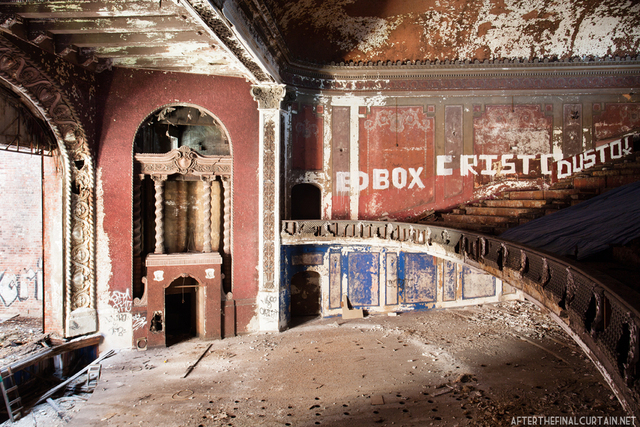 Built on the site of an earlier Majestic Theatre (ex-Rex Theatre) which was destroyed by fire in 1927. The Majestic Theatre opened February 26, 1928 with performances by Al Jolson and George Jessel. It had 1,767 seats and was equipped with a Wurlitzer theatre organ. Initially, it was operated by Harry Redman. Later in September 1928 a Vitaphone sound system was installed.

Closed in 1960, it is now owned by the city. Like the rest of downtown East St. Louis, has been in a state of decay for years.

It was Listed on the National Register of Historic Places in 1985.

If you go to ICB’s post from Apr. 30 2009, it has pictures of the interior which shows the light coming from that square on the stage house. I don’t think they would put a skylight above a stage. Was there a water tower on the stage house? It could be the old platform for it.

The stage house roof is intact on the bird’s-eye view of the theater at Bing Maps, too. In the bird’s-eye, the structure on the roof that resembles a skylight looks more like it might have been part of the building’s ventilation system. It looks like it is partly covered with sheet metal, but some of the metal is missing, exposing an underlying framework.

In the 2008 photo, note the shadows falling from the two beams that cross the missing stage floor. The one on the left extends almost straight down, while the one on the right is at more of an angle. These shadows are consistent with light falling from the left section of the stage house roof, where that skylight-like structure is.

From the bird’s-eye view it doesn’t look like there’s any glass in the structure where the light gets in. If that’s the case, then it doesn’t bode well for the building. If it’s entirely open, then water can get in. Maybe the hole has been plugged since the various photos were taken, but if it hasn’t, water will soon destroy the building’s integrity. The Majestic could soon be unsalvageable— if it isn’t already.

Re: William’s note about the skylight on the 13th. They did put skylights over the stage in some houses. Radio City had three. They could be swung open if there was a fire on stage to ventilate the area and not fill the auditorium with smoke. When we did the “Lion King” premiere we had a Disney stage show which featured lots of pyrotechnic usage. The first rehearsal where the fireworks were used generated so much smoke that all of the elevators responded to a fire warning, went to the basement and stopped running until the smoke was cleared. Stagehands went up to the roof and opened the skylights. After that, for the rest of the run they were opened for the stage show. Since we were doing matinee performances, we could see a small patch of sunlight from the open skylights hitting the stage floor during the screening of the film. Every day it moved closer to the screen and we were wondering when it would actually get into the picture area. Fortunately, the run ended before that happened, but we were aware of the skylights after that.

I also remember working a Diana Ross concert one really stormy night when the stagehands had to go up and throw tarps over the skylights because the rain was coming down on stage about where Ms. Ross was to make her entrance.

The skylights did contain glass panels as normal skylights would, but the glass was painted black. Thinking about it now, I wonder if that wasn’t done so that a major fire involving the drops hung in the flies would generate enough heat to break the glass, creating a self opening skylight to ventilate the heat and smoke upward.

I would suspect what you saw at the Majestic was indeed a skylight over the stage house.

THIS theater’s demise is a crime.

An ad for the American Seating Company in the October 6, 1928, issue of Motion Picture News featured a photo of the auditorium of Redmon’s Majestic Theatre.

I recently photographed the Majestic Theatre. Check out the post at After the Final Curtain

Great comments all. And thanks to all who’ve taken pix inside this heap. It’s truly a shame. Those of us that live near estl can assure the rest of you that this theatre will never be restored. Estl is simply incable of not only doing the project, but of supporting such a venue. You would have to raze the entire downtown area, hell, the entire city, in order for a “theatre-going clientele” to feel safe enough to patronize it. I worked got a NY based company that restores historic theaters, state capitols, etc all over the country (Evergreene.com is worth perusing) do j hsvd an idea of what’s involved. The New Amsterdam they restored in NY was in BAD shape, but not nearly this bad. Plaster and paint are doable. This sort of structural decay is 99% a death sentence. It’s so sad. Maybe if it could be picked up on ond piece and moved to Dubai….

Sorry for all the iPos (iPhone typos) but u can figure out (got= for, if= of, etc)

msova, I totally agree. This theater will sit and crumble because the city can’t afford to raze it. Of all the places I’ve been taking pictures, this one was the one I was most concerned about my safety. I can’t see any hope for this one being restored or viable.

My grandparents met at this theater in the 40’s. When it closed they sold some things out of it. I own 1 of these pieces and I can see it in 1 of the photos. If anyone might know someone that would like to see it or knows anything about the history of this theater please contact me. thanks