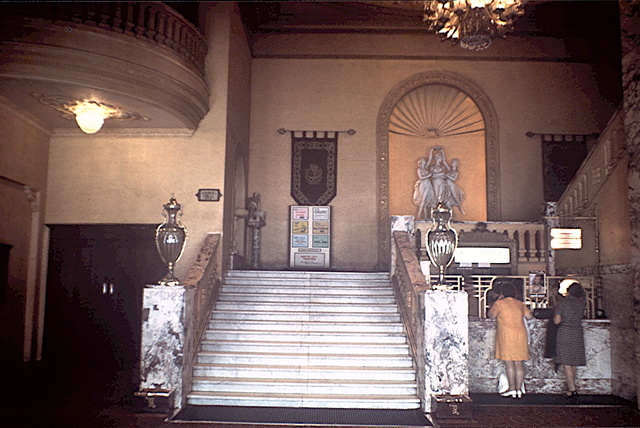 This was Hoyts premier showcase movie palace in Sydney. Designed by the distinguished architect Cedric H. Ballantyne of the firm Ballantyne & Hare, it was built by James Porter & Sons. The 2,297-seat Regent Theatre opened its doors in the heart of George Street on 9th March 1928 with Greta Garbo & John Gilbert in “Flesh and the Devil”, with the Regent orchestra containing 40 musicians accompanying the silent film. The Regent Theatre was equipped with a Wurlitzer 3Manual/15Ranks theatre pipe organ, opened by organist Roy Devaney from the Tower Theatre, Los Angeles, California.

There had been a theatre planned on this corner site from about 1914 with many architects having an interest in the plans. The site was owned by J.C.Williamson, Australia’s leading theatrical producer who already had other Sydney live theatres and weren’t particularly interested in building another. This is why the planning went on so long and passed through so many hands, most notably architect Henry White. Williamson eventually decided to build the theatre and immediately lease it to Hoyts Theatres Limited. The interior decoration was to be completed in a Hoyts house style similar to the other Regents' planned or already completed in other main cities of Australia.

This was one of the most desirable sites in the city, being at the rise of a slight hill running up to the City Square which contains a Cathedral and Town Hall. It had direct access to the major bus routes which stopped outside the theatre and also to the underground railway beneath. It was originally intended to occupy the entire corner site but the building right on the very corner was a small branch of the Commonwealth Bank who had no interest in losing their prime location. It was decided to build around the bank so the theatre had a side extension into Bathurst Street planned for dressing rooms.

The façade in George Street was Italianate in style and decoration. Monumental pillars and pediments soaring above a glittering bronze and glass marquee. Horizontal and vertical neon signage and urns. There were a selection of small shops along the massive George Street frontage with the main entrance to the lobby beneath the arch in the marquee. You stepped into a triple height lobby with a marble staircase and walls faced in marble. Above you hung a spectacular Art Deco crystal chandelier made of thousands of glass balls cascading down like a waterfall. This was the only evidence of deco in what was otherwise Italian Renaissance furnishing throughout.

The Regent Theatre for all of its life as a movie palace was the flagship showplace for Hoyts Theatres who were later directly owned by 20th Century-Fox. All of Fox’s biggest hits opened here and many Australian premieres were held at this theatre. This was reflected in the lavish appointments internally. The seats were comfortable, there were acres of subterranean powder rooms and plenty of refreshment areas and the foyer space was plentiful with many real antique pieces to delight. CinemaScope was introduced for Christmas 1953 with “The Robe”, and thereafter the most popular films played this theatre.

During the 1970’s J.C.Williamson decided they would sell the property to offset the cost of rebuilding their major Sydney live theatre that had been destroyed by fire. Hoyts were pulling out of any old buildings they operated and embarked on building one of the first multiplexes right next door to the Regent Theatre, so they had no interest in buying. The theatre was put on the market and did not sell, being passed in with a top bid of AU$4.5 million. The building was then privately sold to a Sydney entrepreneur who continued leasing the theatre to Hoyts until their lease expired.

At various points in its career The Regent Theatre hosted live entertainment and after the loss of Her Majesty’s Theatre to fire in the 1970’s there were regular live shows interspersed with film presentations. The Regent Theatre lent itself well to this task with an orchestra pit and a wide proscenium. There were stage facilities that were adequate but some poor sight lines and few dressing rooms.

It was decided to rectify the situation and after lengthy investigation the new owners spent millions upgrading the theatre. Sight line issues were improved, the foyers repainted in a dramatic scarlet with a gold trim. There were new bar areas and offices created within the old George Street shops, and the bars opened into the rear of the stalls. The stalls was fully carpeted and re-seated. The exterior cleaned and restored including the marquee. The dressing room block into Bathurst Street was completed finally and below on the street level an expensive restaurant opened. The only thing that could not be addressed was the lack of a good deep stage. The Regent Theatre was redeveloped around some of the theatres live engagements so they were still upgrading into the 1980’s.

At this point the new owners started being offered enormous incentives to develop the site. In spite of the live theatres' success the owners were basically money oriented and decided to sell. When the public got news of this the government became involved and placed a heritage order on the building. The construction unions blacklisted the site in an attempt to preserve the building. There was a very active group inaugurated to fight to save this grand theatre for the city. The owners were at loggerheads with the planning authorities and state government and resented being told they could not develop their site so they shuttered the building, stripped it and left it to decay.

What the owners were waiting for was a change of state and local government which they eventually got, and with it and much money changing hands at the highest level, the theatre was eventually approved for development. The city was already owning another decrepit movie palace (Capitol Theatre) that they didn’t know what to do with, didn’t want the Regent Theatre and so agreed for the demolition to take place as quickly as possible so as to enable a high rise to be built before the coming Olympics of 2000.

The grand lady of George Street came down with much anger and hysteria from the campaigners and the site was levelled in about three months during 1990. Due to an unforeseen slump in the property market the site then sat vacant and neglected for years while the new owners waited for the market to improve. The site was still a hole in the ground for the 2000 Olympics; an eyesore and embarrassment to the city council and state government who had approved the demolition of a beautiful civic amenity.

In 2006 construction work began on the site which had been and empty plot of land for 16 years!

I can’t believe I walked past this spot so many times while I was at uni and never knew what a beautiful building once stood there. It’s really sad that so many of our cultural treasures are abandoned. Also, a little bit of coincidence: there’s also a Regent Theatre in Wollongong where I grew up that closed down and stands abandoned. Hopefully no one will knock this Regent down. I’ve been trying to find the exact location of the Regent with Google Maps but I can’t get the addresses to match up. The article above mentions that additions were made into Bathurst Street. Can anyone please tell me which side of the George and Bathurst Street corner the Regent used to stand and what’s there now?

It remains untouched and is now a church. It is on the shopping mall side.

The links to the Regent Theatre Art Deco chandelier posted here in 2009 are no longer valid. The photos and historical information on the chandelier can now be found on the link http://www.smartdecorprops.com.au/replica_art_deco_chandelier.html. There is also visual footage of the Regent Theatre foyer in the film “For Love Alone” starring Sam Neal and Helen Buday. There are several upmarket restaurant scenes that were filmed in the theatre foyer areas. I know, I was there ;–).

I have a large piece of ornamental plaster with three lights in it from the Regent Theatre on my living room wall that I bought from a salvager. What a wonderful place it was.

Something Is Out There, a 1988 tv movie set in Los Angeles needed a large derelict theatre for scenes involving a giant alien crashing through the walls and used the Regent. A lot of trouble for short scenes and sad to see the grand old place come to this.

I worked on No No Nannette, and the original plaster proscenium was gone. Back to the structural opening. It was interesting to see the fire curtain come down at the old proscenium line. More fly lines were installed between the old proscenium and the wonderful plaster line most people remember. By now, the house tabs were flown out. There was plenty of hight under the auditorium roof.

Worked at the old Regent as relief assistant cinematograph operator. The rake fromt the bio box to the screen was huge. The film was stored in its cans below the box, accessed by a steel spiral staircase. She ran on Guamont-Kalee 35mm projectors with RCA carbon arcs.

The Netherlands Dance Theatre played there once.They are still one of the premiere ballet companies in the world. One of the ballets that they played was danced by all males and they were completely naked.They entered the auditorium from the rear and danced down the aisles naked

This theatre building should not have been demolished! So much for the heritage listing!

An icon on George street, I have fond memories of waiting what seemed like ages, in a Christmas time queue to see the movie “Journey to the Centre of the Earth” I was very young at the time but still can just remember the beauty of the interior. Outrageous that it was allowed to be demolished but that’s the price you pay, not for progress in this case, but rather corruption. If the current building on the site was demolished no one would even remember it, just a typical modern banality.