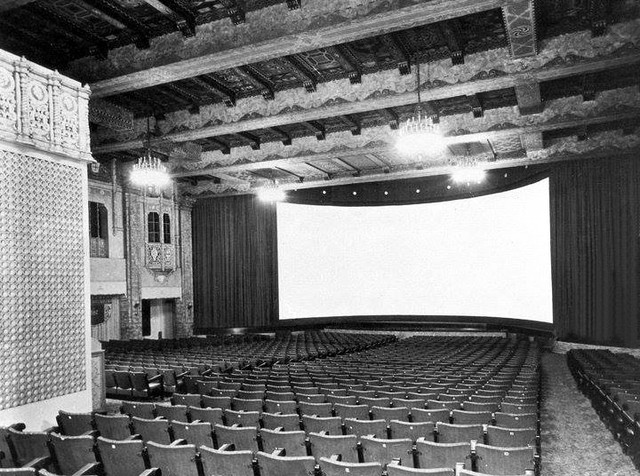 Built on the site of the DeLuxe Theatre. Hoyts Plaza Theatre in Sydney was the original quintessential “Spanish” styled theatre. It was famous in the old days as a picture palace complete with an English built Christie theatre organ and a full orchestra on an elevated platform. The Plaza Theatre was opened on 9th May 1930 with Cecil B. DeMille’s production of “Dynamite” which starred Conrad Nagel. The supporting programme was Laurel & Hardy in “Night Owls” and American organist Eddie Fitch opened the Christie organ. The original plan was for a 4,000 seater, but the stock market crash of 1929 was to see those plans go out the window.

In September 1958, the Plaza Theatre was refurbished for 3-strip Cinerama and the screen at that time was the largest in Australia for an indoor cinema.

All big 70mm blockbusters from Fox, MGM, United Artists, etc., were shown here from March 1965 onwards. The screen dimensions were 75ft x 35ft. The Plaza Theatre was closed in June 1977 with Terence Hill in “Mr Billion”.

It was used for a time as both skating rink Maxie’s Manhattan Disco and a restaurant. A Heritage order prevented its demolition until 1995, when Planet Hollywood removed the remainder of the auditorium’s decoration. The foyer is intact and is used as a McDonalds restaurant. Planet Hollywood only lasted a short while, and today the auditorium has been ‘twinned’ with the Plaza Restauraunt operating in the upper half.

BEFORE THE PLAZA The site was home to several theatres, beginning with the Atheneum Hall which opened in 1907. It was renamed the Oxford Theatre for live events in 1908 and then the Colonial, a 1200 seat theatre in 1910 which showed films. Hoyts took over in 1917 with the name DeLuxe. See photo section for the DeLuxe. The Plaza opened on April 11, 1930 with “Dynamite” Demille’s first talkie. The Sydney Morning Herald reported “Mr. Eddie Fitch, formerly of the Oriental Theatre, Chicago, has been engaged as organist for Hoyts' new Plaza Theatre. Mr. Fitch came to Australia last year and has been acting as organist at Hoyts Regent Theatres in Melbourne and Brisbane.”

I saw the original three-way-split Cinerama “demo” film here….lots of exciting stuff such as a roller-coaster ride, the U.S. Navy’s “Blue Angels ” flight team and so forth. It was really an introduction to Cinerama.

Then I saw every Cinerama film that came to Sydney, including “Grand Prix” and “2001: A Space Odyssey”. I think “Alien” was also screened here.

Worked at the Plaza 1968-70 as assistant to the chief operator. The plaza had the proscenium of its predecessor theatre, behind the cinerama screen. The theatre had very ornate ceilings that were hand painted with stars, moons and the like. The ceiling was not held up with poles. At the rear of the auditorium was the two entrances from the foyer.The bain entry was from the north side of the foyer. the second was facing the street and was only used to empty the theatre at the conclusion of the program.

The original bio box was in the elevated rear wall of the auditorium.Above the entrance. When redeveloped for Cinerama, three bioboxes were added to the auditorium. Able, Baker and charlie.The old room became the sound booth for the system and was accessed from the ladder behind able booth on the north side of the theatre. It also served as the file room for Hoyts Ltd head office.

The Original Cinerama screen was patented and was in three parts to match the projector booths. The two side screens were multiple 1" slats that could be remotely re-aligned to eliminate cross reflection. The centre screen was a single square sheet.

In front of Baker booth (in the centre) was the chief operators console. From here the operator could monitor and adjust each projector, to ensure that they kept in step with each other.

When I started at the Plaza they Had already shifted to the new single lense Cinerama format. As such they shifted into 70mm, Cinemeccanica 10s and after about 18 months changed from carbon arcs to Zenon Arc Lamps as a light source. As the original Cinerama screen was patented, a new single sheet had to be installed and yes as you guessed to pull it around a curve created a belly in the middle of the sheet and thus a slight distortion of the image.

All these theatres were replaced with the Hoyts Cinema Complex opposite the Plaza in George Street.

I seem to remember the Plaza had a brief period as something like Maxy’s Diner/New York Diner… something like that. It was open 24 hours, and it didn’t last long. It would be sometime in the 1980s. Does anyone have any information? Many thanks.

The cinema was originally build for grandeur (70mm wide screen) in 1930 but the brief 3 year wide screen era never eventuated in Australia.

This opened on April 11th, 1930. Its grand opening ad can be found in the photo section for this cinema.

The old Plaza Theatre, then called Maxy’s Roller Disco, had the after party, after the World Premiere preview of the movie “Can’t stop the music” at the Paramount Theatre.

The restaurant is now a bar called Star Bar.

I have very fond memories of the wonderful Plaza. When I was a kid I was taken to see “How the West was Won” in 3 strip Cinerama and of course it made a great impression which remains to this day. The last movie I saw there was “Ice Station Zebra” around 1971/72 . The subsequent closure/conversion marked the beginning of the decline of this once great entertainment area of Sydney. The great Regent and the beautiful Paramount were soon to follow to be replaced by complete shit.

I saw The Poseidon Adventure with my family there when it came out in 1972.Virtually 50 years ago.Needless to say we were all blown away by the movie but for myself a ten year old,just visiting and being inside such an exquisite,cavernous picture palace was just as amazing as Irwin Allen’s early,soapy disaster epic.Memories…