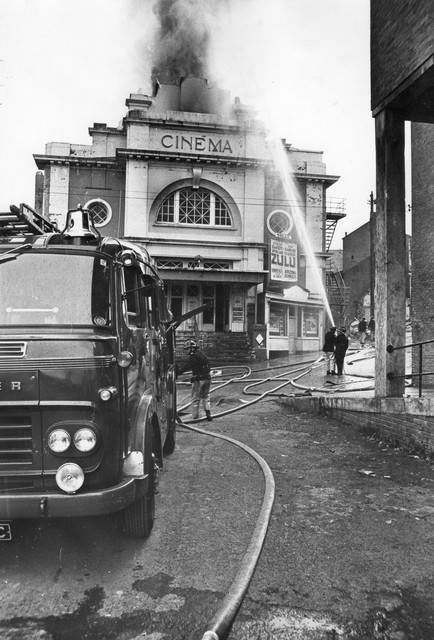 The Park Cinema opened on December 26th 1921, with seating for 1,050 in stalls and balcony. Early in its history the cinema also housed a billiards hall in the basement of cinema which remained until the cinema burnt down.

The Park Cinema become the only surviving cinema in the town after 1968, and owners, Jackson Withers Circuit Ltd. of Cardiff planned to have the cinema redecorated and modernised, but on Wednesday 26th August 1970, the Park Cinema was gutted by fire before the afternoon showing of “Zulu”. The only part of the building to survive the blaze was the cinema frontage and projection room.

The building was soon demolished and the area redevoloped.

I am not that surprised that the box survived the fire. Prior to the advent of non flammable film stock, all cinemas had boxes that were designed to contain an outbreak of fire. All ports were defended by drop down shutters and the boxes also had heavy fireproof metal doors. The shutters were usually linked by an over head latch system that could be operated from either the balcony or the back of the stalls. After the advent of non flammable most of these fire prevention measures remained in place. In most Withers cinemas circa 1960s, it was still standard practice to drop the shutters at the end of an evenings showing.