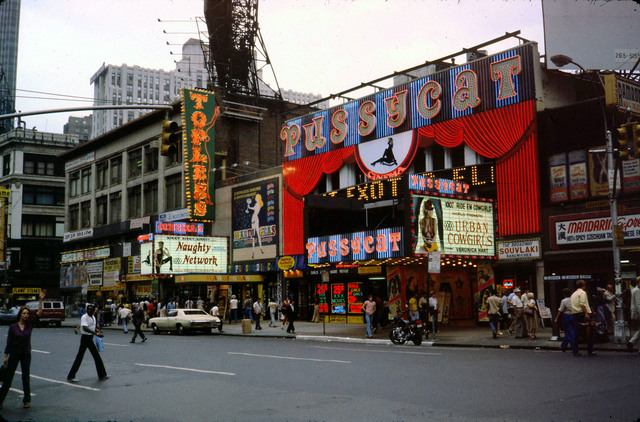 Designed by Eugene DeRosa, the Trans-Lux Broadway Theatre was a small newsreel theatre, first opened in 1936. The entrance was on the west side of Broadway, just below the intersection with 49th Street. By the mid-1950’s, television had made newsreel houses redundant, so the Trans-Lux Broadway Theatre switched to double features or whatever first-run bookings it could get.

In December 1966, it was renovated to the plans of architect Drew Eberson and reopened as the Trans-Lux West Theatre on April 24, 1967 as a link to the circuit’s brand-new Trans-Lux East Theatre on 3rd Avenue. Trans-Lux tried to book the two theatres day-and-date, but that didn’t prove too successful because the Broadway theatre had a quite different clientele.

Both were demolished in 1987 to make way for a skyscraper hotel.

Linkrot repair: The links in my comment of November 9, 2009, are dead. The Boxoffice articles I referred to about the remodeling of the Trans-Lux Broadway into the Trans Lux West are now here:

April 24, 1967. This is a brief item saying construction had begun and that the opening was planned for May 22.

The remodeling project was designed by Drew Eberson, who had also designed the Trans-Lux East Theatre a few years earlier.

1965 photo as the Trans Lux added via Mauri Huttunen.

What tipped me off is large The Bible billboard between 45th and 46th Street. This was the early one announcing production of the film. There was a second one for when the film was completed and would open at Loew’s State in'66 using the photos that you see on the cover of the LP(I saw this one as a boy.)

Then if you look closely at the Warner marquee IAMMMMW is playing its Cinerama roadshow engagement which had opened in ‘63. And you see a large sign part of which says HAM. This could be an advertisement for the Burton Hamlet(not that it needed it) which played on Broadway in '64.

Hard though to see what was playing at the Trans Lux.

Sorry but I love the minutiae of the old Times Square.

You are correct. I blew it up and on the Trans Lux marquee it reads “Planes Crash 57 Perish” which was Civil Air Transport Flight 106 on June 20, 1964 & “Kennedy Tours Poland”, which was RFK’s trip in June 1964. There is also a “NY World’s Fair 64” license plate on the convertible at the curb.

It appears there is not separate CT page for the Kitty Kat Theatre next to the Pussycat yet. The Overview states it was around the corner on 49th Street, but all the photos show it as next door. Did it have a second entrance on Broadway next to the Pussycat? Either way, there is no page for it. I’m assuming it was at 1599 Broadway based on a photo I just added.

David, although the marquee was next door I believe the theatre was upstairs and shared the same address as the Pussycat.

OK, I will leave the Kitty Kat photos in the gallery. there are additional ones in the below link, among other Pussycat photos in addition to New Yrok.