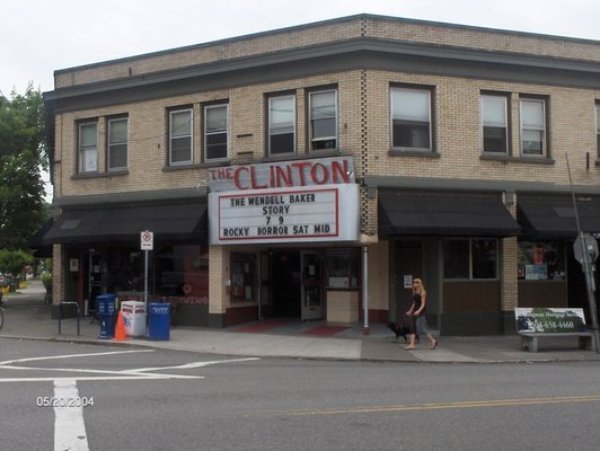 The Clinton Street Theater is a unique single screen indie art house. Built in 1914, it is said to be the oldest continuasly operating movie house west of the Mississippi.

Claim to fame: “The Rocky Horror Picture Show” has been playing every Saturday for 26 straight years. A record that is unmatched!

This place still rocks! It’s built in the early Craftsman style. The outside is very plain, then you walk inside and it’s like WOW, it is amazing!

Here is another photo of the Clinton:
http://tinyurl.com/268xle

The world record holder for the longest running engagement of The Rocky Horror Picture Show belongs to Landmark’s Oriental Theatre in Milwaukee, WI. However, the Clinton Street Theater does come in a close second. The Rocky Horror Picture Show began its midnight run at the Oriental on January 7, 1978 and the Clinton Street Theater run began, according to their website, in April of 1978. So, In January of 2009 the Oriental celebrated its 31st anniversary engagement of the cult film. Please read this blurb from Newsweek in 1999:
FRANK-N-FURTER, IT’S ALL over—at least at the UC Theater in Berkeley, Calif., which last week ended its record run of “"The Rocky Horror Picture Show'‘ after 22 years. The 1975 cult flick, famous for hemp-inspired audience participation, is still a regular event at 50 U.S. venues, time-warping toward its 25th anniversary in 2000. The top remaining regular runs:

Sadly the Majestic ended its run of RHPS not too long after this article was published. The UC Berkeley was run by and the Oriental and Nuart are run by Landmark Theatres.
Hopefully, in such a dismal economy, the record runs will continue. I’m curious to know if there are other record runs of other films in the world, or would these be the longest running world records of any or all film titles??

The Oriental theater does not.

That is why The Clinton has the longest “continual” run in the world.

I’m in Portland on vacation and drove past the Clinton. Glad to say that it looked well maintained, at least on the outside. And yes, Rocky Horror is still playing.

The “Museum Lichtspiele” in Munich, Germany show the movie ever since June 24th 1977. Therefore all the theaters you named loose compared to this.