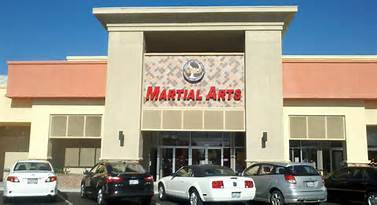 The Campbell Twin Theaters were located in the shopping center at Campbell Avenue and San Tomas Aquino Road. It opened around 1970. I remember seeing the “Planet of the Apes” festival back in the late-1970’s.

They were closed in the early-1980’s, gutted, and converted to a racquetball club.

After that fitness craze died, it was converted to Dolphin Pet Supplies, which moved to another location in 2007. In 2017 it is a martial arts scool.

I remember when it opened on a particular Wednesday I can;t recall in 1971. The movies I saw there the first time it opened (I went that Friday) was a Michael Caine film, “The Last Valley” and a British sci-fi B-movie called “Battle Beneth the Earth”. One of the reasons I remember it so well is because I was 11 years old when It opened and it was the first movie theater I went to without my parents. My friends and I saw many of the Planet of the Apes films there, as well as Westerns like “Something Big” with Dean Martin, “Joe Kidd” with Clint Eastwood and “The Wrath of God ” with Robert Mitchum. I got a big kick out of the action movies but I also remember seeing “chick” films like “A Touch of Class” with George Segal and Glenda Jackson" and “Butterflies are Free ” with Goldie Hawn. Movies like that would first play at the Pruneyard cinemas in downtown Campbell or the Century Theaters on Winchester Blvd in San Jose. After they ran there, then they would show up at the Campbell Twin. I saw a lot of movies twice because I would ride my bike to see a flick one month at the Pruneyard and then see the movie with a second feature a couple months later.
The Campbell Twin showed genre movies and second runs of bigger feature films like “Fiddler on the Roof”, “Paint Your Wagon”, “Patton”, usually paired together. Sometimes a triple was played and as Ted Kupolus mentioned they were one of the theaters that showed all five “Planet of the Apes” film at one time in the Summer of 1974.
One of my favorite double features from the early seventies was “Bonnie and Clyde” and “Bullitt”. This was shortly before the films were shown on CBS. The last time I went to the theaters was in September of 1974. (MASH played with Butch Cassidy and the Sundance Kid") I remember they had a concession/ticket area that divided the screens so it was hard to sneak into one movie to another.

I left the area and came back in the Fall of 1978. By then the Campbell Twin had closed. It did indeed become a racquetball club.

The Campbell was listed in the 1970 motion picture almanac. It was part of Sunny-Mount Theaters, a San Francisco-based chain.

The pet store moved last year. Unknown as to what’s at the location now.
http://www.dolphinpetvillage.com/

Yeah, went with a friend to see the “Go Ape!” festival. We’d seen all pictures save for “Battle.” The first film started at 11:00am and then each played in sequential fashion with no breaks. Finally got out of there about 6:00pm. Needless to say, we were “ape’d.” Fun time.

I spent the better part of my adolescence at the Campbell Twins. I learned all all about exploitation movies from that place when I was a kid. God knows how many bad kung fu, horror, sexploitation films I saw as a little dweeb. I hung out there so much the owner said why don’t you work here, so he gave me a job cleaning up the theaters in the morning before it opened. All the free stale popcorn and bad movies I could watch. Even the R rated ones. A side note when they tore the screens out the construction crews tossed out a load of posters and I fished them out of the pile. Got a Fearless Fighters, Flesh Gordon and a Groove Tube poster. Wish I still had them.

The Sav-On Drug store in this complex was fantastic, we used to go there in the 1970s when we lived in Campbell, they charged 15 cents for a scoop of ice cream or sherbet; but once a month, they held a 5-cent day, I think it was on a Sunday. (Full-sized … not like the little cylindrical scoops that Thrifty always used.) Yum.

OK, I’m about 90 percent sure this is where my dad took me to see “Quest for Fire,” when it first came out, in the early 1980s. I’ve always wondered where that was.

Though I grew up.down the street from here and we shopped at this center regularly (I can name almosr every shop in the center from the 70s) I never remember this as a theater, oddly. But after it became a racquetball place it became a series of failed gyms (one after the other) and at one point D and J Hobby entertained absorbing the space into a large expansion but they couldn’t get the landlord to level the floor so it fell through…

then Dolphin Pet moved from its original location in the Kirkwood Plaza (across the street) to this location. It was there for several years and was going to go out of business but apparently then moved back over to Kirkwood into a smaller locale and then eventually closed.

After the pet shop left the old theater it became an Ernie Reyes martial arts studio …Which it continues to be at this point in March of 2017….