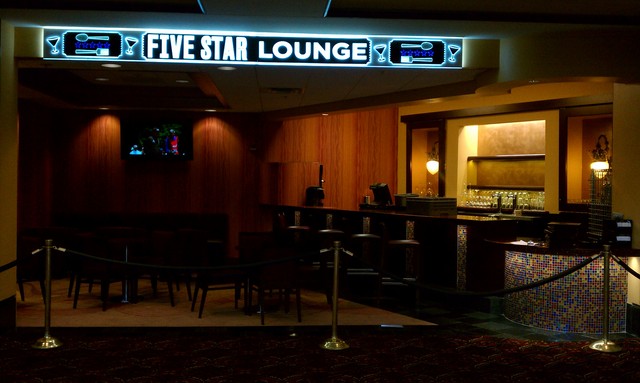 Opened on September 28, 1973 as the Des Peres 4 Cine'. Building of the Des Peres was the end of the Wehrenberg Theatre chain offices above the Cinderella Theatre on Cherokee street in the city after 67 years leaving the home area of the beginning of the company. When first built the Cine' was a four screen with the offices built in the rear lower level. The theatre went through and expansion and remodel in 1989 expanding it to 14 screens.

The Oriental chandeliers from the Ambassador Theatre had been bought by Wehrenbergs when the Ambassador Theatre in downtown St. Louis was ready for the wrecking ball. The chandeliers were installed in the new lobby of the Des Peres during the renovation along with all their beauty. They seemed to blend the décor in the new lobby to match the chandeliers. This being the office location of the Wehrenberg Theatre Chain, they left no expense go by. The theatre lobby is very eye catching. The auditoriums were blended with a red and blue and wall sconces line the auditorium walls with and Oriental mystique.

The theatre never closed during the renovation but was only open during the evenings. This was surely a flagship for the Wehrenberg circuit. By 2019 it had been taken over by Marcus Theatres.

the architect which did the stadium seating renovation for this project was Rataj Krueger Architects Inc. Please see the web site at www.RKAI.net for more theater examples.

According to wehrenberg.com, this is part of the Wehrenberg Theatres chain.

Another theatre that I’ve been PAST a million times but never gone inside. Next time I go home to St. Louis, I’m finally going INSIDE!

I used to go to this theater frequently in high school. I believe it started off when the 14 screens were built as regular theaters. Never being the type to focus on quality instead of the latest flavor of the month, Wehrenberg then shut down all of the theaters on the left hand side of the building to convert them all into stadium seating. Now this theater has half stadium seating, and half regular seating. I believe building stadium seating here was because Wehrenberg always likes jumping on the bandwagon instead of blazing their own trail, and because they needed to compete with the up and coming West Olive 16 which was (at the time) the largest theater and the one with 100% stadium seating.

Getting to the theater today is a little different than it was when it was built. Manchester road now is only 1 way in front of the theater. You actually go behind it if you’re headed west on Manchester when you cross over the highway. I don’t know if this new road format has helped or hurt business at this theater. I will say it is one of the nicer Wehrenberg theaters I have been to (at least in the 1990s). This also seems to be one of the last all-brick Wehrenberg theaters as they now build bawdier theaters like Ronnies, St. Charles 18, Dardeene Prairie. No offense to the architect, it’s just the brick looks much more impressive.

I don’t know if anyone else has noticed, but there used to be about 9 tv screens in the middle of the main lobby (Chesterfield Galaxy and Arnold 14 have the same). They used to always show previews on those screens. Nowadays they put up a big cardboard sign in front of it that had the Wehrenberg logo.

I hate to say it, but Wehrenberg never keeps up with quality. This theater must be one of the next few that will be go. Sadly, I remember when this was a packed theater always.

Des Peres 4 Cine: not my favorite cinema! This was Wehrenberg’s multiplex that helped dumb down theaters in St. Louis. When it started as four screens, they were four smallish shotgun-shaped auditoriums with small screens at their fronts.

I really did not want to go to movies there! Not at all. Seeing what should be a big-screen film on what was basically a big TV screen was deflating. Having boring multiplexes like this lowered the odds that you could see a movie on a decent screen in St. Louis.

The 14-screen redesign was kind-of okay when it came to the main auditorium, which later got stadium seating. But, the other screens were pretty much as useless as the original four.

I went there last year for a church service, and the place is aging, and not in the best way.

This is now a Marcus I think.

Also the official address was always 12701 Manchester Road, even when it was a Wehrenberg property. It has entrances on Des Peres and Manchester.