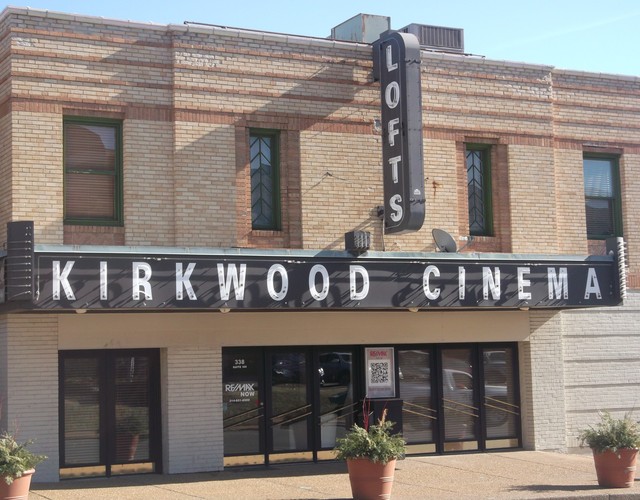 The theatre opened in 1932 as the Osage Theatre seating 642. Located just a few blocks south of the Kirkwood shopping district. The theatre was nothing to brag about as far as décor when it opened, just a single floor theatre.

Arthur Theatres took over the operations in 1968 and completely remodeled it and it became the Kirkwood Cinema. They did a nice job on the remodel redoing the lobby in an Art Moderne style. The auditorium was at that time lined with draperies covering the old bare walls and new seating was installed cutting the seating to 596. Arthur at times ran art films in the Kirkwood Cinema and when the Arthur Chain went out of business the theatre was operated by the Mosely Brothers. They did their best with showing art, revival and later became a discount house. On June 28, 1968 it was renamed Kirkwood Cinema.

They gave it up in 1998 and it was then turned into a children’s theatre for live presentations. It continued to occasionally have programs for children. One of its biggest problems with the theatre in its later life was lack of parking. They had to make arrangements with the Mo. Dot. across the street to use their parking lot in the evenings.

By 2009, it had closed and was converted into office space and housing.

During the period of April 1967 to June 1968 theatre was known as the Osage Art.

The last operator was Harman Moseley who reopened the house in September 1991 as a twin (each auditorium seating around 200). Closure as a film operation took place in October 1999

“ Arthur Theatres took over the operations in 1961 and completely remodeled it and it became the Kirkwood Cinema.” (Chuck Van Bibber)

My money’s on JAlex’s comment. The brother’s fact checking skills are second to none!

My research has shown that the venue first appeared in the Arthur Enterprises blanket ad in April 1967. It was at this time the theatre became known as the Osage Art.

Prior to this time, theatre had been owned and operated by Henry, then Charlene Wendt.

My research also has shown that this theatre had union problems…even before opening. It was in 1944 that this, and two other theatres (the Kirkwood and the Ozark), effectively closed every other theatre in the area. (In brief, the film handlers struck in sympathy with the projectionists.)

I just posted a 1946 photo of the Osage, courtesy of the Vintage St. Louis Facebook page.

I worked for AMC in the early 70’s… A perk of working for AMC, was you could watch a movie at any AMC movie house for FREE… I remember a continuous Midnight showing of the Rocky Horror Picture Show, what had quite the following.

I always liked the look of the Kirkwood.

I think TheWiz may be confused about the dates when he or she worked for AMC and saw “Rocky Horror” at the Kirkwood. AMC didn’t operate theatres in St. Louis in the 70’s. AMC did show “Rocky Horror” but that was probably in the late eighties. The Kirkwood was operated by Arthur Theatres in the 70’s. I worked there as an usher/parking lot attendent, assistant manager and finally manager. I was hired in 1973. “The Harrad Experiment” had been playing there for months when I started. There were pickets outside protesting the sex and nudity in the film. My first night, we also showed “Frank Zappa’s 200 Motels” as a sold-out midnight show. The Kirkwood was known for showing art films for months. Before I started they had shown “Nicholas and Alexandra” exclusively for a long run. When the Arthur Theatres closed, the Kirkwood Cinema and the Webster Groves Cinema remained open because both theatres were partly owned by the original theatre owners and were still able to pay their bills. The Fox and the 270 Drive-in also operated independent of the rest of the Arthur circuit and remained open. I was the manager when the Arthur Theatres closed. Eventually, Mid-America bought us, closed for two days, and reopened, keeping the entire staff as well as me.

I use to go to the Osage in 1964-65, and it was definitely called the OSAGE then, not the Kirkwood Cinema….

I worked at this cinema when I was in high school in 1986-87, when it was a “dollar show.” Actually it cost $1.50. I worked box office, concessions, usher, janitor. I would climb out of the second floor office window onto the top of the marquee to change the movie titles. I remember sitting in the lobby while the movie ran, smoking cigarettes and doing my homework, fishing butts out of the sand ashtrays with a sieve. I had keys to the place and went in on Saturday mornings to mop the floor and count the inventory. The only movies I remember showing there were The Color of Money and Little Shop of Horrors. As I remember it, there was a parking lot just north of the building.