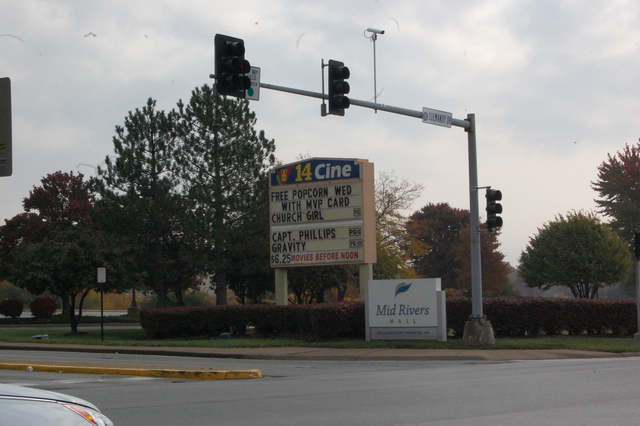 The Mid Rivers Mall 6 opened with the mall opening December 9, 1988 and was operated by GCC. When GCC left the St. Louis market, Wehrenberg Theatres took over the theatre. When the mall was remodeled and the food court moved in 1996 the theatre was renovated and expanded to 14 auditoriums and became the Mid Rivers 14 Cine'.

Wehrenberg Theatres did a great job on the decor and the comfort of the patrons. Most auditoriums are stadium seating and stereo sound in all auditoriums. St. Charles county being the fastest growing county in Missouri easily support both the Mid Rivers 14 and the St. Charles 18. It was taken over by Marcus Theatres in 2017.

Some of the original 6 screens were incorporated into the new build. There was additional work done, aside from making the screens all stadium seating. The screen entrances used to be lower than the rest of the mall, as referenced in my earlier comment. They may have added, or moved, a screen of two. I haven’t had many movies on that side of the Cineplex, and have not gone there as frequently since the Galaxy 14 in Chesterfield set their lower prices.

Sorry, but there is no part of the original GCC 6-plex that was incorporated into the new Wehrenberg-designed 14. The two theatres are in different sections of the mall.

No, it’s still part of the original 6-plex. They may have moved the entrance, but the positions are still pretty much the same. Otherwise, it would have taken longer than it did to transition from 6 to 14. It was closed less than a year. Not to mention, a waste of still useable theater space.

I can assure you that no part of the 14-plex is the same as the old 6. I worked for Wehrenberg when the new construction happened. We didn’t want the old building due to numerous problems with that space. Since the new build was separate, the old theatre was able to operate until the landlord and tenant wanted it to close.

Just out of curiosity, DAL, what kind of problems where they? Were they structure-related, location-related, or customer-related?

Aside from the split-level configuration of the lobby, which depended upon the lift elevator to give access for our disabled guests, the space had an ongoing problem with odor and moisture. Both GCC and Wehrenberg probably spent a lot of time and money trying to correct those issues.

Are they wanting to put some reserved seating in? I saw Interstellar there last week, and in that particular auditorium (Screen 9), there were two seats surrounded by velvet ropes, which eliminated one of the two spaces for wheelchair seating.

Since the Marcus takeover, they seem to be showing more Bollywood films here. According to the listings for this coming Friday, there will be five movies in either Telugu or Tamil. I don’t know if St Charles County has that big an Indian population, and even so, a mall multiplex doesn’t seem like the obvious place for them. The average teenage mall moviegoer would want more mainstream movies,