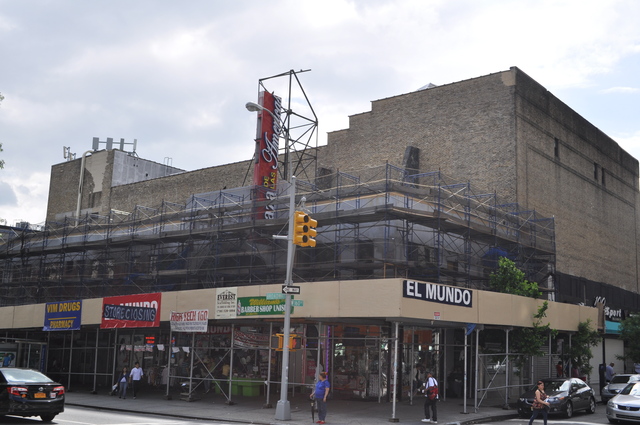 Opened in March 1920, the Rio Theatre was already a thriving vaudeville-movie theatre when Loew’s took over in the early-1920’s, but I have no information about its architectural style or what the name signified. But I some how doubt that it related to anything Brazilian. Due to its location so far uptown at Broadway and W. 159th Street, the Rio Theatre was probably patronized only by residents of the area. Loew’s Rio Theatre was equipped with a Moller 3 manual 32 rank theatre pipe organ.

After the opening of Loew’s 175th Street in 1930, the Rio Theatre was reduced to playing the same programs, but two weeks later. Loew’s Rio Theatre closed in March 1957 with Tyrone Power in “Abandon Ship” (aka Seven Waves Away) & Ben Gazzara in “The Strange One”. It became a supermarket for the next 50 years. In 2011, it was in multiple store use as ‘Plaza de Las Americas’. By 2017 it was SuperFood Town.

The Rio closed in March 1957. The last movies were “Abandon Ship!‘ and "The Strange One”.

The April 3, 1920, issue of Motion Picture News said that the Rio Theatre on upper Broadway had opened “…a few days ago.” It was originally operated by David B. Picker, who I believe was the grandfather of the producer David V. Picker who has, in recent decades, been at various times the head of Paramount, United Artists, and Columbia Pictures.

The Picker family owned theatres in Manhattan and the Bronx before selling the operating leases to Loew’s. The current David Picker is the son of Eugene Picker, who became an executive of Loew’s Theatres and eventually president by the time the Tisch brothers bought control.

The building has been extensively renovated as of late 2016/early 2017. The main auditorium is now home to a two-level SuperFoodTown. The upper floor has an exposed ceiling, and you can see the original beams of the theater roof, which is neat. Little else is recognizable. Some detailing around the old theater entrance survives, though partially obscured by signage.

I had family who lived on Broadway at 148th Street, and one afternoon in the mid-1950s, I visited the Rio. The theater was ‘air-cooled’ rather than air-conditioned, and I recall large fans mounted on the side walls of the auditorium. Can’t recall what movie was playing, though.