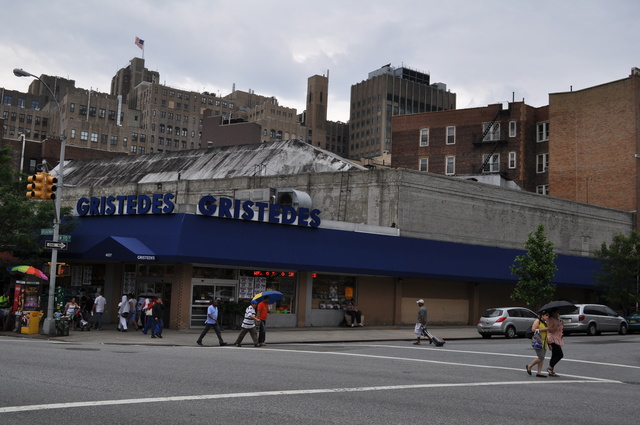 I remember seeing a movie with Bill Haley and the Comets there, and one with Dámaso Pérez Prado in ‘56, maybe “Mambo Mania” or “The Mambo Kings”.

The Uptown Theatre probably opened in late 1921 or early 1922. Items in the Bulletin of the Board of Standards and Appeals of the City of New York indicate that the application for a permit to build the theater was made on July 25, 1919, but as late as July 13, 1921, architect George Mort Pollard applied for an extension of the time the board had required for completion of the project. The extension was granted for one year. Adolph Lewisohn was the owner of the theater.

Pollard, best known for his residential buildings, designed at least one other theater in New York, the Harlem Grand. There was also a theater in his artists cooperative studio-apartment building, the Hotel des Artistes, but I’ve found no indication that it was ever used as a movie house.

Thanks, BobFurmanek. It’s been a long time. Good memory (or reference).

The Wurlitzer company shipped an organ, Style H-Special, opus 1403, to the Uptown Theatre, NY in July 1926.

@Joe Vogel I’ve been inside this theater. It looks like a Eugene de Rosa theater, and various lists of De Rosa theaters have him as the architect.

It’s quite possible that De Rosa was the the architect and Pollard was simply acting as supervising architect. De Rosa was a very busy guy in those days and might have turned the project over to Pollard after it stalled, or the owner of the theater, Adolph Lewisohn, might have hired Pollard to get the project finished if he was dissatisfied with how De Rosa’s office was handling the construction phase.

If you look at the THSA website on the Manhattan index cards (card 186) it says Pollard started work on a theater at 4023 Broadway that wasn’t completed, but De Rosa built the Uptown at 4037. https://historictheatres.org/wp-content/uploads/2017/06/MM-Manhattan-Index-Cards.pdf

As I said, I’ve been in there and if you see the dome and the proscenium you’d immediately recognize it as a De Rosa theater.