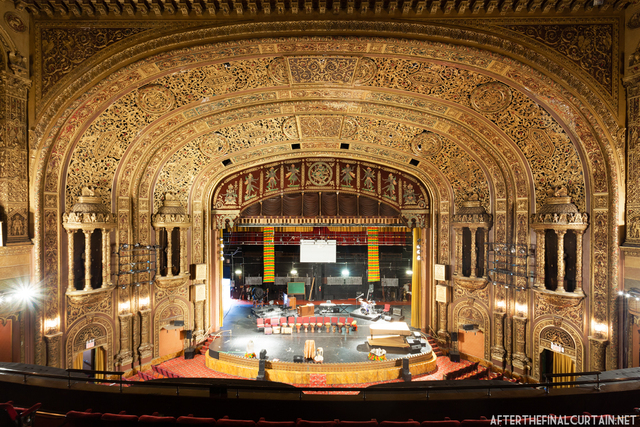 The fifth and last of the Loew’s “Wonder Theatres” to be built in New York, Loew’s 175th Street Theatre was thought to be the most elaborate of architect Thomas Lamb’s endeavors. Originally seating 3,444 when it opened on February 22, 1930 with Norma Shearer in “Their Own Desire” and a stage show “Pearls” from the Times Square Capitol Theatre. The exterior of the building is in the style of a spectacular Neo-Assyrian fortress, taking up an entire city block, and has decorative features around the entire building. The walls of the auditorium are embellished with Indo-Chinese decoration, designed by Manhattan decorative specialist Harold Rambusch, which are perforated and have an ever-changing kaleidoscope of colored hidden lights behind. The foyer features a palatial staircase leading to a grandiose, aurora borealis headed by a goddess decoration, all in the style of a gaudy Hindu temple. The Loew’s 175th Street Theatre is the only ‘Wonder Theatre’ to retain its original Robert Morton 4 manual 23 ranks ‘Wonder’ organ in situ. Loew’s closed the Loew’s 175th Street Theatre in March 1969 with Keir Dullea in “2001:A Space Odyssey”.

The theatre became home to Christ United Church, founded by the late evangelist Reverend Ike, and was known as The Palace Cathedral for church services. In recent years it has also been used as a concert venue and is known as the United Palace when booked for such events.

In June 2013 a fundraising campaign was begun to purchase a digital projector, which will be used to screen independent, foreign and classic movies. This project was successful, and the first movie screened in the theatre for over 44 years was “Casablanca” on November 17, 2013. It is equipped with a 4k DCP projector, a 50ft wide screen and 5.1 surround sound. In July 2017 it was announced the Robert Morton organ would be removed from the building by the New York Theatre Organ Society to undergo a complete overhaul. By early-2019 the restored organ was back in the building. On June 9, 2021 a Gala World Premiere of the movie “In the Heights” was held at the United Palace of Cultural Arts.

Took the one hour tour today. What a beauty. Glad to see this was never demolished.

On 7 April 2019, the United Palace organization celebrates its 50th anniversary as owner, occupant and operator of the venue with a special screening of the sci-fi classic “2001: A Space Odyssey” (the last movie shown at Loew’s 175th before it closed as a commercial movie house in 1969). The special event includes pre-movie entrance music played on the “Wonder Morton” theater organ and a live guest appearance by movie star Keir Dullea. After the movie show, a special ceremony features Dullea in an on-stage Q&A session with UPCA Board Chairperson Jean Houston and the audience, followed by a musical performance with inspirational singer/songwriter Karen Drucker. The festivities conclude with an after-party on stage (with ticket sales providing supporting funds for UPCA’s “Movies at the Palace” classic film series programming).

Reposting from Paris Theatre photo comment by Orlando the following-

The United Palace, when it shows its' monthly movies uses a brand new red velvet, gold trimmed curtain that closes at the movies end.

The article Howard Hass reference above has a very extensive high quality photo gallery of the theatre. Article also mentions the theatre was extensively renovated around 1970 when the theatre was bought by the Reverend Ike and concerted into the United Palace Church.

The article can be found at:

According to a radio news report this morning, “In the Heights” had a gala world premiere performance at the United Palace last night (6/09), prior to a simultaneous launch in theatres and on HBO/Max.

All About Eve gets some of the greatest audience reactions I’ve ever been a part of. One of Thelma Ritter’s facial expressions got a big round of applause.

All About Eve is a proven crowd-pleaser.

“All About Eve” never actually played at Loew’s 175th Street. After its Roxy premiere engagement, the 20th-Fox release had its first-run in Washington Heights at the RKO Coliseum, and then went on to other cinemas in the area.