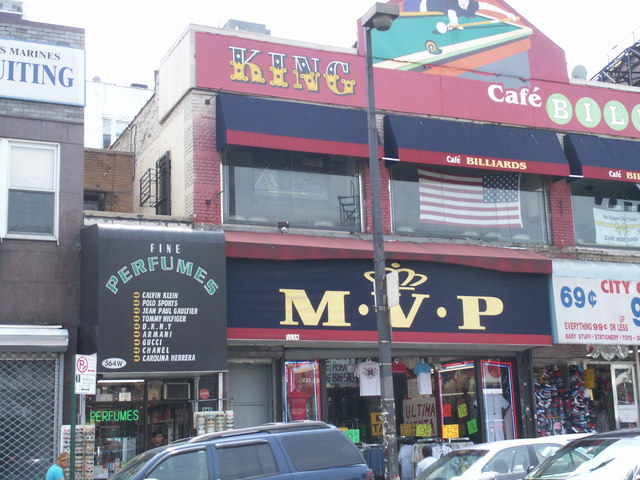 As early as 1919, this theatre, then known as the Classic Theatre, was exhibiting motion pictures. By 1922, it was known as the Gem Theatre and continued to operate until around 1955.

Here is a photograph I took of the Gem Theatre, now in retail and billiard hall use:
http://www.flickr.com/photos/kencta/192825705/

This was already advertised as the Gem in 1922.

The age of this building makes it difficult to find much information via an online search of the NYC Department of Building records. It seems the structure was erected around 1913-1914, but none of the older documents are viewable.

There is an alteration for a portion of the building that fronted at 1408 St Nicholas Avenue dated April 3, 1924, for a very small store with maximum occupancy of 8 persons.

Another alteration dated August 4, 1952, shows 1st floor occupancy for “stores” and 2nd floor “offices.” This certificate covers the entire building, listed as 564-566 West 181st Street and 1408 St Nicholas Avenue, and may indicate when the theater itself was first converted to retail space – however, I have my doubts since occupancy for the store space is listed as 50 persons. This may have applied only to a portion of the building which may never have been a part of the theater’s operations.

A temporary permit was approved on January 20, 1955, at 564 West 181st Street for a synagogue on the 2nd floor. A final approval followed on September 7, 1955, noting stores on the 1st floor and “offices, synagogue and social room” on the 2nd floor. Certainly, by this point, the Gem Theatre must have been closed and gutted.

Ed, I remember coming out of our building, at 560 West 180th Street, from 1952 to 1955, you could see a rabbi through the 2nd floor windows of the building right across the street, which must have been 559 to 569 West 180th Street, celebrating his rite with the minimum quorum of men. Maybe in January of 1955 they expanded to a synagogue at 1408 St. Nicholas Avenue, which would have been right around the corner from where he was; it was the same 2nd floor. The Biltmore Cafeteria, pretty large, was on that block of St. Nicholas, which turned to Sterling around 1955; there was a big clock on the sidewalk near 180th Street.

Went to the photographs of the facades and the aerial photographs, the building of the rabbi seems to be 569 West 180th Street, that entrance is closed. On the corner there is an “Ella” store, around the corner on St. Nicholas a sign says “chocolate”, the big clock seems to be gone.

The storefront currently at 1408 St Nicholas Ave is occupied by a clothing shop called Top Gun – at least as recently as the Google street-view is dated. It is a few doors down from the sign that says “chocolate,” in a narrow 2-story building with a large window and red & black vertical stripes painted on the upper facade. That is actually part of the Gem Theatre structure, I’m not sure if it was originally an accessory exit for the theater at some point (since it would have surely backed up to the rear of the auditorium), but it was at least partially converted to that small store I mentioned above, according to the 1924 alteration permit.

Ed, Are there old telephone directories of Manhattan available? All I remember about the Gem theater, where I first went early in 1952, is that it had rocking seats.

I grew up at 558 W 181st from 1954 to 1971. The Gem was gone before I could remember it but I have a map of the Heights from 1932 that shows the entrance was on St. Nick about mid block and next to the apartment building at the corner of 180th. The Lane had an entrance on 181st that went into the block with a majority of the theater on the 180th street side.