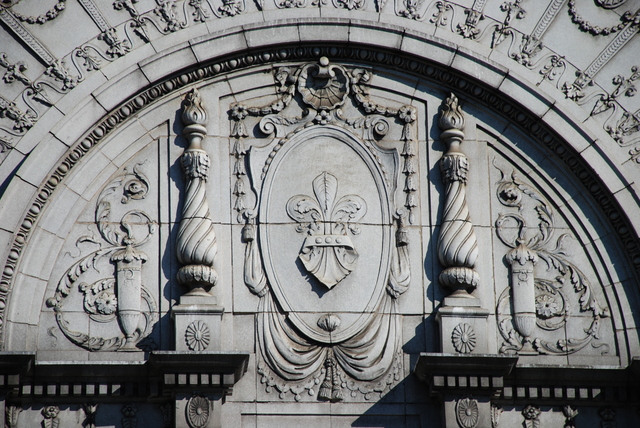 Located in the Washington Heights neighborhood of Upper Manhattan, on the northwest corner of W. 181st Street and Broadway, the B.S. Moss' Coliseum Theatre boasted to be the third largest theatre in Manhattan, with 3,462 seats, when it opened on September 23, 1920. Original plans were drawn by architect William H. McElphatrick but they was not used. The plans by architects Eugene DeRosa & Percival Raymond Pereira were approved by B.S. Moss Enterprises who launched the theatre. It was equipped with a Moller 3 manual 15 ranks theatre organ. The orchestra pit had a capacity for 25 musicians. It later came under the management of RKO.

In its heyday it hosted B.F. Keith’s Vaudeville and many of the most famous vaudeville acts came to the stage of the Coliseum Theatre. The Marx Brothers, W.C. Fields, Eddie Cantor, Uncle Don’s Kiddie Show, and Gertrude Berg of television’s “The Goldbergs” were among the performers who had been there. It became a full-time movie theatre in 1934.

On November 10, 1978 it was twinned by dividing the mezzanine, while the orchestra section was converted into retail use occupied by New York & Co., Bravo Supermarket, Radio Shack and Easy Connections. At this time the ornate original ceiling in the auditoriums could still be seen and appreciated by those who have a passion for nostalgia. The spectacular RKO ‘lightening bolt’ neon lit marquee that wrapped around the corner entrance was removed in 1984. Cineplex Odeon closed the twin on November 9, 1989.

It was was re-opened under new independent management on June 28, 1991, operating a a quad.

The theatre closed in 2002, but reopened in July 2004, as the New Coliseum Theatre, operated by Jesus Nova. By 2009 it was named Coliseum Cinemas using a former exit off the original main foyer as its main entrance. It was closed on November 3, 2011. It was being prepared for demolition in November 2019. Demolition began in March 2020 and was completed in November 2020.

as of May 5, 2019, there are no posted permits for demolition on any part of the exterior of the former Coliseum. Scaffolding is limited to the first story of the structure and “el raton” abatements (raton hotels) along 181st St. and Broadway perimeters of the building. Like the Loew’s Victoria, the building will be demolished on it’s centennial. This still leeaves the Regent and the decrepit Hamilton and the newer former RKO 23rd Street as the companies leftover legacies. P.S. and the Marble Hill if that’s still standing even though a Bronx location. Still painful to see the longest running RKO venue in the borough go. The last to carry the RKO name and (vertical RKO sign on 181st Street into the 2000’s.

as of June 30, 2019, thru a hole in the 181st entrance I caught a glimpse of the marble staircase which are awaiting…. the facade on 181st St. and the the angel’s face on Broadway also await. Windows, up above open exit doors are open to let the pigeons have their final days of their home also lost their lease. I will post again in two weeks… No walls have come down since my last post but the end is near… Goodbye RKO Coliseum. It lasted 99 years but won’t be for its' centennial. Like the Loew’s Victoria. A Dunkin Donuts is set to take over the corner.

November 2019 update: Passed by the (former) theater yesterday; almost entirely covered by scaffolding and sidewalk sheds from head to toe. Last remnants of the marquee are still visible by the former entrance. It looks as if they’re demolishing it brick by brick as the rooftop is starting to come down.

The building is 10 months shy of its centennial; not certain if they’ll be anything left by then. :/

It’s a shame there are no interior pictures posted.

Passed by a few days ago in February 2020 … netting and scaffolding up and I couldn’t see or hear if anyone was working in it or on it? The Washington Heights Community Board dropped the ball on this vital Theater in the Heights that was among 17 others from West 155th Street to West 193rd Street. The CB should be tarred and feathered.

@kidblast 1: To be fair, there was a push for the building to be granted landmark status, but it had been subdivided so many times since the early ‘80’s that it made it structurally ineligible for that status.

I did some digging of my own via Dept. of Buildings public records, and gathered that Lloyd Goldman (of BLDG Mgmt., owners of the property) has owned the building housing the Coliseum for quite awhile before it closed. Perhaps the theater’s perpetual troubles (closing in 1989, 2002 and finally in 2011) finally convinced him to go another route.

At least we still have the United Palace. The former RKO Hamilton remains vacant, occasionally used for fashion shows and pop-up stores, but it likely won’t be repurposed for a theater or art space.

There goes the neighborhood theaters….

October 2020 update: Less than a month after its centennial (September 23, 1920), DeRosa and Pereira’s intricate architecture can no longer be seen from the corner of 181st/Broadway. The former theater has been halfway demolished and remains as a gutted stump behind the scaffolding, roughly up to the level of the still-intact marquee (for now).

November 2020 update: The theater is gone for good, down to the last brick. The former balcony entrance and decrepit “Coliseum Cinemas” marquee were among the last portions of the theater to come down.

It endured a prolonged decay 9 years after closing, but the Coliseum now belongs to the annals of time.