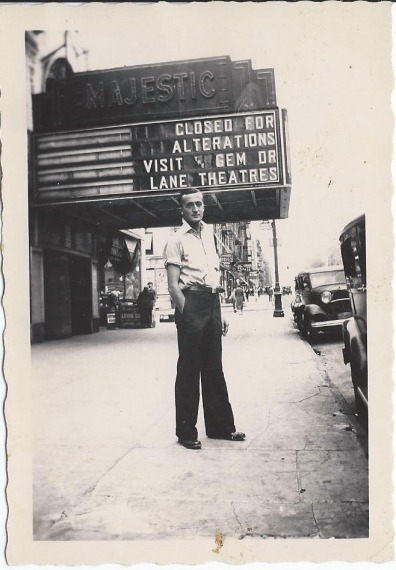 Now long forgotten, this cinema in upper Manhattan’s Washington Heights district is little documented except for film trade annuals, which variously listed its seating capacity as 1,000 or 1,400, and with an address of either 1493 or 1495 St. Nicholas Avenue. Originally opened as the Majestic Theatre in 1913, it was renamed Loyal Theatre in 1937 and closed in 1941.

It was converted into a bowling alley to the plans of theatre architect William L. Hohouser.

The Majestic apparently became the Loyal in 1937. The April 1 issue of Motion Picture Daily said that Springer & Cocalis would reopen the Loyal Theatre, formerly the Majestic, in Washington Heights, on April 2.

J.J. Lyon built the Majestic Rooftop Theater in 1912 seating 265 at the site of a former church. The Majestic Theatre was also created there opening in 1913 with lots of seats (original seat count is listed at 1,800). The Big Three Corporation — operators of the Garden, University, Pictorium and Seventh Ave. Theatre among their seven theaters at the time operate it for much of the decade before divesting their operation. The Braddon Amusement Circuit took on the theatre next and one of the few claims to fame for the Majestic was housing a radio transmitter for radio telephony that hit experimenter’s radios in Washington Heights just prior to commercial radio taking off in the U.S. It existed alongside the rooftop theatre.

Jaydo takes on the theatre transitioning it to sound and also its Gem from silent into sound theatre. Jaydo sells the struggling theater to Fairdeal Enterprises which leads to a lawsuit in 1936 of little consequence other than the holding of the Majestic passing to Springer & Cocalis' Spraco Corp. It is that circuit which changes the name to the Loyal Theatre in 1937. But patrons aren’t loyal and the theater ceases in 1941. The auditorium is gutted and the 1493 St. Nicholas facility is converted into the Palace Bowling Center launching in 1942. Though ending this addresses' cinema exhibition, Architect William L. Hohouser’s conversion project makes the national magazine, Lighting, among others as a creative transformation of a faded cinema locale.

as in the Bronx many theaters in upper Manhattan closed within a short period of time after the t.v. was introduced into the American home. to which I find it interesting that this theater closed in 1941 long before anyone had
heard of a t.v..

to hdtv267. I don’t understand your reply of “yes and ?”. as I stated it was highly unusual for a movie theater to close before t.v. was introduced in to the American home. all the neighborhood theaters in the Bronx I attended when I was younger didn’t close till years after t.v. was introduced.