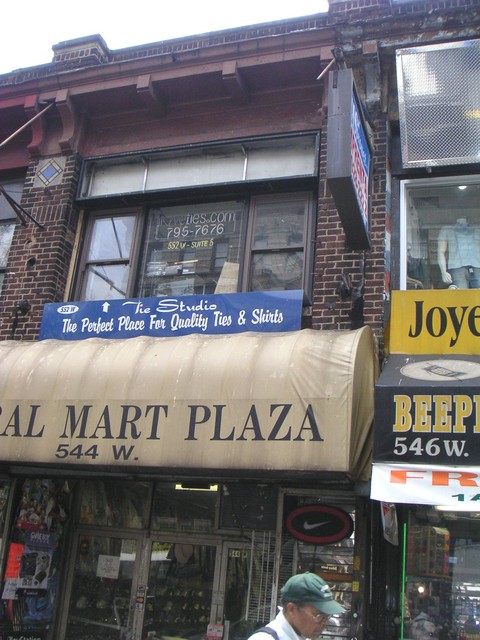 The only thing I know about this neighborhood house is that it opened as the Empress Theater in 1913 and closed in the 1970’s.

GaryZ, I’m nowhere near the NY Public Library main branch now. I grew up in Washington Heights, but now live in Florida. Thanks for the tip anyway. I e-mailed 3 book sellers including Jumel Terrace Books about an old Manhattan telephone directory yellow pages, I’m still waiting for a reply.

Guarina, good luck. As I recall very clearly, the movies shown in the Empress Theater were never advertised in the newspaper. You had to take pot luck; that is, see or not see whatever they were showing. Sometimes you knew a week in advance, via the posters they would place in the lobby, or the “coming attractions.” But for a kid paying only 50 cents for three movies, one never complained!

GaryZ, RSearchEtc answered me they don’t have any Manhattan telephone directory yellow pages now, try later, and the other 2 didn’t bother to answer. As I used to live 2 blocks away, I’d walk to the theater and see what was playing. I assume you lived in the neighborhood. Have you gone to http://home.comcast.net/~idreos/H9.html ? It’s about old Washington Heights.

Guarina, thanks, I’ll check out that site. Have checked out several Washington Heights sites, and some of them bring back memories all right. But generally people recall just their old neighborhood, within a radius of a few blocks. I lived a dozen blocks south of the Empress—-and of course the great RKO Coliseum—-and it was always a great walk, knowing that you’d see three movies in the Empress for only a quarter in the late 1950s, and then 50 cents in the early ‘60s. They were generally movies shown after the general release in the major theaters, and sometimes a very old movie, dating back to the 1940s, was shown. I remember seeing NORTHWEST MOUNTED POLICE, GI BLUES, THE FAR HORIZONS, FIRE MAIDENS FROM OUTER SPACE, THE MAGNIFICENT SEVEN, SITTING BULL, MORGAN THE PIRATE, many of the Hercules movies and other sword and sandal epics, and so many more films, there. The concession stand was small: the hot dogs were not good, and the popcorn always never salty enough! It was not a well-kept place. The manager was a fat, mustachioed fellow who often walked up and down the aisles checking things. But for 50 cents, who would complain? You could spent almost the entire day there. They also sometimes showed “adult” movies there, which in those days were generally documentaries about nudist camps, or risque foreign films with Brigitte Bardot etc. I was always envious of my older brother and friends who could get in to see those! When it became the CINEMA 181 in 1962, it had been beautifully cleaned and refurbished under different management, and even the outside marquee had been jazzed up to present a classier appearance. And they showed more up-to-date films. I saw DR. NO there, as well as THE MAGIC SWORD, GERONIMO, THE 300 SPARTANS, SODOM AND GOMORRAH, THE LONG SHIPS, etc., etc. I actually felt great pride in that little theater after it was fixed up. It was still a smallish place, much smaller than the Coliseum or Loews 175th, but the movies were just as good.

GaryZ, I used to go from the RKO Coliseum at 181st Street, the Heights, the Empress and the Loew’s 175th, to the Uptown on 170th Street. I sometimes went to one on the Grand Concourse in the Bronx, saw “One Summer of Happiness”. At that site about Washington Heights they advertised two books, “Nosebleeds from Washington Heights” and “Oblivious in Washington Heights and Loving It”, I asked my son for either one of them and he sent me both for Mother’s Day. I’ve finished them both, but they’re both written by guys who lived west of Broadway and hardly even knew anybody who lived east of Broadway, neither of them mentions ever going to the Empress, the Lane or the Gem, or even the Heights. They went to the same Humboldt Jr. High School 115 as I did, but I guess it was a few years before me. I went back to New York in June of 2001 after a long time, but don’t know what was still left in Washington Heights, couldn’t find any familiar store, went to the movies in Times Square, saw “Sous le sable”.

I just noticed OnslowKUA’s comment about the Empress under the Lane: “On the same side of 181st Street on the same block to the east of the Lane was another theater called the Empress. This theater was unique in the sense that you entered it at the side of the auditorium in the middle.” True. At the entrance to the right there were a couple of vending machines, then the seats were to the left and the screen to the right. I remember that as if I were looking at it, if it were yesterday.

I can’t remember, but I believe it might have been the Lane in which my Dad took me and my brother to see THE TEN COMMANDMENTS after its initial release (1956 or 1957). For a young kid the effect of the widescreen was indescribable—-you felt as if you were IN the scene, seeing these events in person. A few years ago I revistied 181st and adjacent streets of my Washington Heights youth, and it was difficult to imagine how they had once played so important a role in my life…especially the many movies seen. It’s sad that the movie houses are almost all gone…the Lane, the Heights, the Loews 175th, the Uptown, the Empress, the Alpine….places in which we would not just “observe” a motion picture but actively participate in it with our eyes and imagination.

I remembered I also saw in that theater “Top Banana” in 1954 with Phil Silvers and Rose Marie. I used to eat ice-cream bon-bons off the vending machine.

This must have been known also as the Cinema Astral, showing Spanish dubbed films in the 1970s. Posting an ad from the NY Times June 27, 1975 listing the theater as showing The Godfather Part II either dubbed or subtitled in Spanish.

This movie theater didn’t close back in the 60’s. An Iris Chacón movie played there during the 70’s.