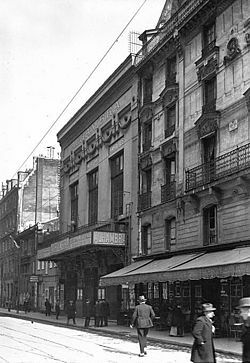 The Cirque Imperial was opened on August 11, 1866. It had many name changes over the years. In 1905 it was taken over by English music hall owner Thomas Barrasford and renamed Alhambra, offering music hall/variety with the addition of a Barrascope projector, used to screen films as part of the programme. It was a great success and continued to operated with this type of programming for many years. It was later taken over by a new operator.

In the late-1940’s/early-1950’s it was converted into a full-time cinema named Alhambra-Malte. This was closed in 1956 and it became a live theatre again named Alhambra-Maurice Chevalier. It was demolished in 1967.

The building on the site today is a mix-use, with retail, offices, apartments and car parking.