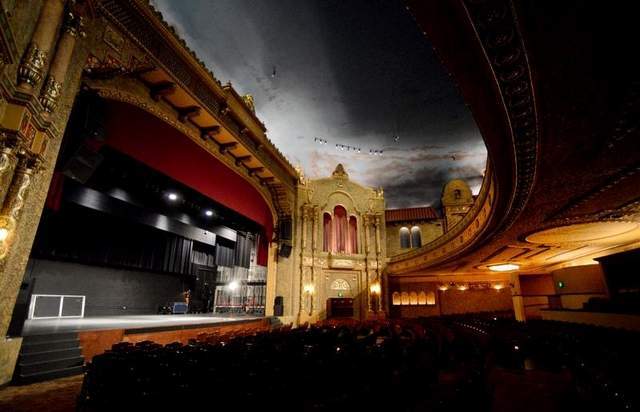 The original Wurlitzer pipe organ, in the Bay Theatre was put back into this historic Atmospheric style movie palace as part of a $5.5 million restoration.

The theatre originally opened as the Fox Theatre on February 14, 1930 and from September 2, 1933 was renamed Bay Theatre. Later converted into a triplex, it closed as a movie theatre in 1993.

The Wurlitzer organ was constructed in 1930 and has been rebuilt using the original blueprint. The organ was purchased in 1989 and kept in storage for 12 years. The old Wurlitzer was a key part of the theater’s renovation, which was completed in 2002 when the Bay Theatre reopened as the Meyer Theatre.

Does anyone know anything about the Green Bay Theater, which was in Green Bay, WI, on numbers 217-221 of some street? See my postcard in my flickrstream: View link
It sure doesn’t look like it could be the Bay theater.

Design will include features of Fox’s facade of 1930s

Five years after a windstorm destroyed the Meyer Theatre marquee, the historic Green Bay venue will get a facelift.

Theater officials plan to spend more than $100,000 for a new marquee that will harken back to the downtown attraction’s original facade of the 1930s.

In contrast to the current rounded sign, the new marquee will be squared, three-sided and lighted – reminiscent of old-time movie houses.

Although the exterior sign is only one element of the 1,000-seat theater at 117 S. Washington St., officials say it is vital to the venue’s visibility and personality.

“It’s the front door,” said Rob Riordan, president of the theater’s board of directors.

The old marquee was destroyed in a March 2006 windstorm that left letters blowing down the street and panels in pieces on the sidewalk.

The current exterior sign became a low-cost replacement, but officials later decided it was not a good long-term solution.

Officials are moving ahead with a replacement after receiving financial support from benefactor Betty Meyer’s foundation and from Reinhold Sign Service Inc. of Ashwaubenon.

Rob Ott, spokesman for Reinhold Sign, said his company is excited to support the project and provide the labor.

Calling the Meyer a “cornerstone” of downtown Green Bay, Ott said the new marquee will be a highly visible addition to the central business district.

“There really isn’t anything like this around the city,” he said. “This is a unique project, just as the Meyer is a unique place.”

The venue opened as the Fox Theatre in 1930. After a run as the Bay Theatre, including a stint as a movie house, it underwent an $8 million restoration and returned to live stage productions in 2002.

The new marquee has been designed to look like the Fox Theatre’s original facade. Standing about 7 feet tall and 36 feet long, it will be equipped with lighted digital screens that will promote not only the theater’s productions but other downtown events.

Construction is scheduled to begin in spring and take three months.

Riordan said he hopes to have the new marquee in place before the theater kicks off its summer season. Giving a nod to the old Fox Theatre is important to the project, he said.

“This is our showpiece to everybody,” he said. “We want to make sure we’re true to the heritage of the theater.”

The new marquee is up.

GREEN BAY — Gravity, the movie, did well in theaters, but gravity, the law of physics, is not being kind to Green Bay’s Meyer Theatre. Among several maintenance issues requiring attention, the ceiling in the main auditorium is beginning to lose its paint. To be clear, the ceiling isn’t unsafe. Parts aren’t falling on patrons and the acoustics aren’t affected, but at some point the deterioration will need to be addressed.

After more than 80 years, gravity is taking over, said general manager Matt Goebel. “They didn’t clean it to what was needed when they repainted it in the 1930s,” he said, and the paint is beginning to separate from the acoustic material.

In February, the Meyer board launched a $4.5 million capital campaign. Of that, $3 million will be used to renovate and expand the adjacent former Daily Planet building, $1 million will go to doubling the theater’s endowment and $500,000 for major maintenance on the 84-year-old structure.

Fox Theatres Inc. opened a 2,037-seat vaudeville theater and movie house at 117 S. Washington St. on Valentine’s Day 1930. By the time it closed in 1998, it had become a triplex movie theater with most of its Spanish Atmospheric interior — highlighted by heavily textured plaster, decorative columns and intricate painted designs and statues — covered up or removed. A community-based restoration project that returned it to its original 1930s look allowed it to reopen Feb. 27, 2002, as The Robert T. Meyer Theatre.

Theater director Julie Lamine said the 1998-2000 renovation focused on getting the building restored and reopened. “Now we are the next group. It’s our job to leave it in good shape for the group after us,” she said. “This part of the whole three-pronged campaign is very vital.”

Fixing the ceiling is going to be tricky and won’t be done soon. A lot of scaffolding will have to be built and the theater closed for six to eight weeks. The material will have to be lightly sanded or washed by hand and repainted. The work likely will be done in summer, either in 2015 or 2016, said Mike Karcz, head of the theater’s building committee. It’s the slowest time of the year and continuing shows, such as those by Let Me Be Frank Productions, might be able to perform in the new Backstage at the Meyer space, as the renovated Daily Planet will be called. Karcz said they’ll also look for a way to make track-lights accessible, perhaps by allowing them to be pulled up into the ceiling, which has a work space above it.

Also, the theater entrance will receive an upgrade. The front of the Meyer has several issues, including an uneven sidewalk and a terrazzo surface near its front doors that was not originally intended to be outside. It easily gets slippery.

The curb in front of the theater is not handicap accessible, and for certain events cars are lined up in the street as people wait to unload and navigate to the sidewalk, Karcz said.

The front of the theater is not deep enough for a vestibule, so it’s difficult to keep that area warm on cold days. Goebel said a revolving door in the middle of the glass entrance and handicap-access doors on each side might be an improvement. Another possibility is heating elements above the doors, Karcz said. “We are working with the historical part of the building — the lobby — so we are limited to what we can do,” he said. It will help that Backstage at the Meyer also will provide an entrance to the main theater. Outside, the east wall needs brick work; pointing and capping. Some of that work was done earlier, but more remains. Karcz said roof work might also be done as part of the Backstage at the Meyer project.

Maintenance of this sort will be an ongoing requirement. The building committee meets monthly to review the theater’s needs. “It’s 84 years old. The challenge is you’re trying to keep the characteristics of the old building,” Karcz said.

The theater’s offices and dressing rooms recently received an upgrade from VerHalen Inc. of Ashwaubenon, which donated the labor and material, Karcz said. The rooms received new carpets, furniture, paint and lighting.

We have professionally cleaned the carpets of this magnificent theater for several years now. It received new carpets in 2014, which I believe were donated. If you have not been to this venue before, it is a must see. This one and the Campus Cinema in Ripon, WI are two historic theaters that are bucket list theaters in Wisconsin.