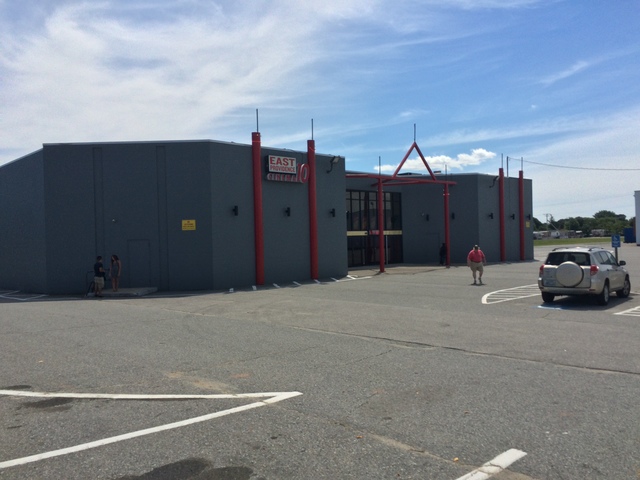 Opened in the 1960’s as the Four Seasons Cinemas with just two screens, showing first run attractions either exclusively in the greater Providence area or else day/dating with other area theatres. They had 70mm projection capability. From time to time they played first run art house fare. Additional screening rooms were added over the years until a major overhaul a few years ago made it into a 10-screen multiplex.

A great place to see recent films at low prices in a fairly luxurious ambience after their first run engagements. This East Providence (Rumford) theatre is near the Pawtucket city line and was the city’s only active movie theatre. Operated by Patriot Cinemas as a discount second run multiplex, it was next operated by the Cinema Holdings Group. In 2013 it was operated by Empire Cineplex Cinemas and closed on January 18, 2020. It was demolished in December 2020.

On a recent drive passing by I noticed after years, they fixed up the onstreet signage and bought new letters so they could complete the movie titles now. I was surprized because they are second run, they have 10 screens and the use of film is just about over with. Wondering what is in the plans with digital conversion. There’s no way they could convert 10 screens charging $2 a ticket.

Theater as of 1/17/2016, tickets are 3 dollars, 2 dollars Tuesdays and Thursdays, has digital projection and sound.

The Four Seasons Cinemas were a fourplex being operated by Esquire Theaters of America in 1970, when the January 26 issue of Boxoffice reported that cinemas 5 and 6 were then under construction, slated for a March 5 opening date.

Esquire had two other projects underway; a second screen for the Paris Cinema in Providence, and a two-screen house for Boston, which ended up being the single screen Garden Theatre. The architect for the Garden was Burt W. Federman, and it seems likely that Esquire would have chosen the same architect for its other projects. Federman designed or remodeled theaters totaling over 1,000 screens between 1966 and 1983, according to a 1983 article in The New York Times.

I just saw Shazam! and Long Shot there tonight (Wednesday); tickets were $3.00, plus a small popcorn was free with each one (a special; weekly I believe). While it’s obviously seen better days, it’s clean and in decent shape (barring a bloc of about four seats missing from one of the theaters). Posters for movies from the past few years are still up, plus a more-than-life-sized cardboard cutout for 2016’s The Huntsman: Winter’s War by the entrance. Note that it’s set back from the main road, Newport Avenue, behind other buildings and off a side street (Narragansett Park Drive), though the marquee is on Newport.

The theater was shut down Saturday by the City when the $9,250 check to renew their licenses bounced. They reopened today after paying with a cashier’s check.

Apparently they haven’t reopened, and the theater is now boarded up and padlocked. https://www.golocalprov.com/news/east-providence-cinemas-boarded-up-and-padlocked?fbclid=IwAR1EmST3XSHfrHk0-XNMdQy5n0Yj3fLCTKUfmuXo3qRRfR-oo8X7scYA1EQ

The building is fenced off with DEMO spray painted on the front.

Does anyone have a more precise ownership timeline than what is given in the overview (and elsewhere online)? In particular, when did Esquire last own it, and in what year did it get renovated into its 10-screen configuration?

Worked there in the mid 80’s when it was The Four Seasons Cinemas. They had an arcade to the left that was always busy.