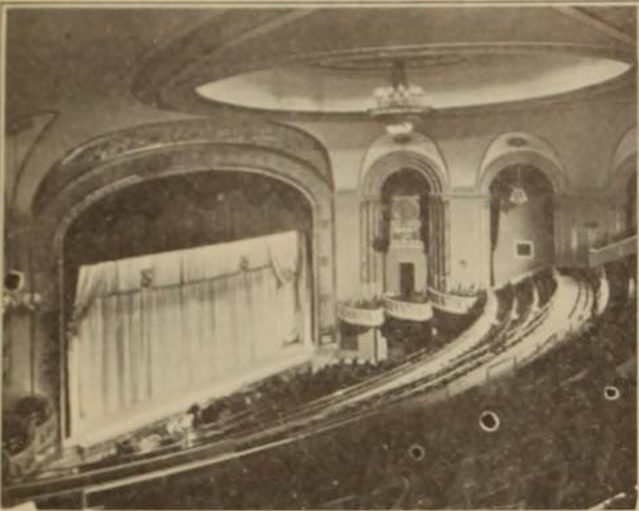 Except for the Thomas Lamb-designed Proctor’s Theatre, New Rochelle, the Capitol Theatre is probably the most beautiful movie-vaudeville palace ever built in Westchester County. The auditorium, with its domed ceiling, side-wall boxes and draped archways, is very similar to the one that Thomas Lamb designed for the Fox Savoy Theatre in Brooklyn, which was built around the same time. Ironically, the Capitol Theatre, which opened under independent ownership in August, 1926, was acquired by William Fox in 1929, with management shifting to Skouras Theaters Corp. after his bankruptcy.

Seven years later, entrepeneur Marvin Ravikoff purchased the Capitol Theatre and began renovations while trying to find a format for running it. Stage plays and concerts proved unsuccessful, so the Capitol Theatre became a catering and special-events facility. The upstairs seating has been retained, but the orchestra floor became an open space for dining, dancing, and trade shows. The stage can still be used when needed. In 2012 it became a concert venue.

For years I have kept it to myself but now with this renewed interest in the Capitol, I have put my escapades into a one act play…namely…I lived up the street at 408 Westchester Ave. My family ran a bakery, J.J. Cassone’s, and I developed the slickest way to get into the Capitol – A Cake for the Band! It worked EVERY time and I got to hang out with the stars after I presented them with their cake. Howard and later, Eddie Claridge, loved it because their stars were happy. It got so easy and I got so cocky that I brought a friend, Doug Abdelnour (who ownd Bedford Photographic) to take pictures. We have Bonnie Raitt, Ginger Baker and Climax Blues Band. But I gave cakes to them all…even met Janis the night she wrote “Mercedes Benz” in Vahsen’s next door.
This will all be documented in my one act musical, “The Cakeman Chronicles” to be performed in Carmel on April 26, 2008, at www.artsonthelake.org
Then at the Unknown Theater in Hollywood in October. And, btw, I go back to seeing double features there in the 50’s and 60’s. In the early 60’s they had “monster” saturdays where they would show a dbl feature horror bill and in the middle would have guys dressed up as Frankenstein and Dracula running up and down the aisles. Hey, we got scared…it was new shtick then.

Hi Chris! My fiance and I are getting married at the Capitol Theatre in June. Any plans to take “The Cakeman Chronicles” on the road to Westchester? We would love to take our family and friends to a local performance.

What a wonderful theater. It is to bad that the interior is all painted white. This seems to be quite common as a lot of old movie palaces that have become venues for other things have had their interiors white washed in some misguided attempt at good taste. The original architects not only oversaw the design of the building but also the interior including the colors used in the decorations, the fabrics used and the interior furnishings. Thereby giving a complete visual package. While the furnishings are usually long gone their is no reason why the colors of the paint can not be replicated. Paint is paint so why use all white?

I started working at the Capitol in october 1968 ,and still work there 42 years later !

Here’s a live stream of a Dead show at the Cap on 6/24/70 that DHeads swear is an all-time classic: View link
(I’m listening to it right now & digging it very much)

The Capitol is BACK! http://www.thecapitoltheatre.com/

The Capitol is doing great as a music venue and is properly managed. They even have a bar named “Garcia’s” that was approved by the family of Jerry Garcia. I wish that they would show some classic revival movies on nights when concerts were not scheduled.