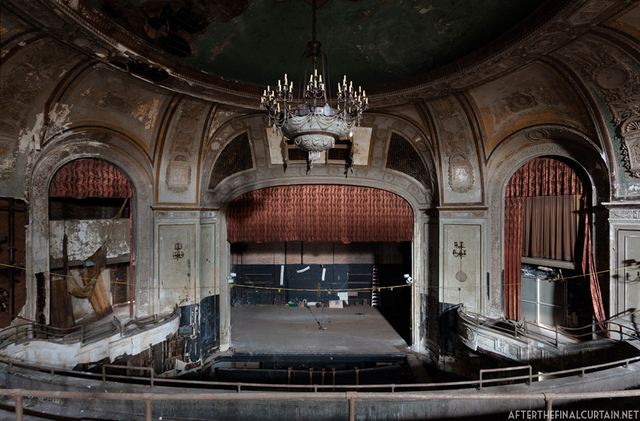 The Embassy Theatre, located in Port Chester, NY (Westchester County) opened in 1926, with 1,591 seats. Built on the grounds of an old Elk Lodge, this old grande dame was originally owned and operated by the Rogowsky brothers, Sam, Jack, Herbert, and Maurice. It has remained in the family to this day (my dad worked the popcorn booth. I am too young to have been involved).

The Embassy Theatre presented vaudeville in its earliest days, and later switched to silent films and talkies as motion pictures became more popular. Movies were still shown in the Embassy Theatre until the early-1980’s (while inspecting the projection booth recently, I can a film reel for Richard Pryor’s 1982 film “Some Kind of Hero”), and as the local population grew increasingly Hispanic, the theater operated as Spanish language for a spell.

An ornate chandlier still hangs amid plaster debris and a water-damaged interior. There are no current plans to renovate, as it would be an expensive undertaking. I don’t want to see her go, but my dad has been talking about demolition. Sadly the interior was gutted back to bare brick in 2017.

If anyone has a plan of action to save the Embassy Theatre, let me know! It’s one of few remaining theaters of its time in the area.

The late entertainerâ€\s local ties are acknowledged in low-key ways such as a library program held earlier this month. But as Port Chester tries to nurture a restaurant and entertainment niche, the village board resolved this month to name something â€" a street, a square, some other proud place â€" for the TV star.

The idea will officially go to the beautification committee for deliberations. In the meantime, a few people around town offered suggestions.

“We lack places for people to congregate,” she said. A shallow inlet along the Byram River came to mind as a potential space that could be filled in for a theater. “It would just encourage more people to perform, do things outside, congregate and have fun,” she said. “And he was all about that.”

Sullivan grew up in Port Chester and stood out as a competitive athlete in baseball, track, football and basketball. He covered high school sports for The Daily Item newspaper, a predecessor of The Journal News, and eventually jumped from journalism to entertainment.

“The lights of the city were drawing him. He just wanted to get there,” said James Maguire, who wrote the biography “Impresario: The Life and Times of Ed Sullivan.”

But if Port Chester was the place he wanted to leave, those roots would work to his benefit.

Maguire wrote in his book that “social commentators would point to Ed Sullivan as the apotheosis of square, a prude, a man who ran his great national showcase by tight, moralistic strictures. Certainly Sullivan himself … was in reality far from this. But to the extent that the man projected this quality, the boy learned this prim and pious worldview on the leafy streets of Port Chester.”

Sullivanâ€\s parents moved to Port Chester from Harlem after two of his siblings, a twin brother and a sister, died in infancy.

When he wasnâ€\t playing sports, he took in movies and traveling shows. He and his brother Charles walked to the Apawamis Club in Rye to work as caddies, said Maguire and an earlier biographer, Michael Harris.

The village has designated itself Westchester Countyâ€\s restaurant capital. But when visitors come to town, Brakewood said, “they see Port Chester, but they donâ€\t see our history, really.”

The last public street named for a person was not a cause for civic pride. William Brody Square, at South Main and East William streets, was named as part of an apology over a 2000 eminent domain lawsuit. The village was faulted for failing to properly notify Brody, a building owner, that his property could be taken.

To honor Sullivan, he said, “I think the school would be a good spot.”

Camille Linen, co-founder of the Port Chester Council for the Arts, suggested asking Sullivan family members for ideas. Her own hope is for a community art center or theater.

Robin Lettieri, director of the Port Chester Rye Brook Library, said an official commemoration would be a popular move.

“The residents of Port Chester love their local history,” she said, “and I think they would really appreciate that.”

I believe the Embassy should be refurbished and used as a performance arts center in honor of Ed Sullivan. Such a shame this building is sitting unused for so long.

The Rogowsky family that has owned this theatre for decades recently sold the property in the past couple of years. There are no plans for what this theatre will be utilized for or be demolished. It would be a nice complement to the nearby Capitol Theatre and is in the middle of restaurant row that includes a restaurant co-owned by Mario Batali.

Unfortunately, this theater was recently gutted.

Auditorium is now gutted to the brick and steel skeleton.

There is still nothing happening with the shell of the former theater.

Scott, I know this is a real long shot, but since the Theatre has belonged to your family from the start, are there any records that contain info of employees who worked there? My grandfather came from a family of musicians from Boston MA and was a former member of the Boston Pops. A casualty of the depression, he travelled around local Westchester/Fairfield movie theatres playing the piano during the showing of silent movies. My grandmother worked for the old Lifesavers company on Main Street. They met on a local train, fell in love..and the rest is history. From Silent movies to Infinity Wars…amazing changes since 1926…but very sad to see historic places like the Embassy vacant and decaying. When I was in High School, Main Street Port Chester was not considered a “safe” neighborhood so I did not see many movies there. But I do remember walking downtown with my friends to see Dawn of the Dead.

Just read Lea Rae’s comments regarding an Ed Sullivan commemoration back in 2009. Unfortunately, Port Chester had a LOOONG list / history of corrupt politicians. Not sure about the other “trustees” named in the column but Dom Cicatelli was definitely one of them. This year, 2018, would the year to make the attempt to save what’s left of the theatre. Everyone who lives or knows PC has seen all the renovation projects, both completed and in progress. The Capital Theatre is thriving. Now would be the time.

There’s nothing left of the theater, Chris.